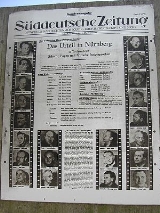 Overview
The Nuremberg Trials were a series of military tribunal
Tribunal
A tribunal in the general sense is any person or institution with the authority to judge, adjudicate on, or determine claims or disputes—whether or not it is called a tribunal in its title....
s, held by the victorious Allied forces of World War II
Allies of World War II
The Allies of World War II were the countries that opposed the Axis powers during the Second World War . Former Axis states contributing to the Allied victory are not considered Allied states...
, most notable for the prosecution of prominent members of the political, military, and economic leadership of the defeated Nazi Germany
Nazi Germany
Nazi Germany , also known as the Third Reich , but officially called German Reich from 1933 to 1943 and Greater German Reich from 26 June 1943 onward, is the name commonly used to refer to the state of Germany from 1933 to 1945, when it was a totalitarian dictatorship ruled by...
.
The trials were held in the city of Nuremberg
Nuremberg
Nuremberg[p] is a city in the German state of Bavaria, in the administrative region of Middle Franconia. Situated on the Pegnitz river and the Rhine–Main–Danube Canal, it is located about north of Munich and is Franconia's largest city. The population is 505,664...
, Bavaria
Bavaria
Bavaria, formally the Free State of Bavaria is a state of Germany, located in the southeast of Germany. With an area of , it is the largest state by area, forming almost 20% of the total land area of Germany...
, Germany
Germany
Germany , officially the Federal Republic of Germany , is a federal parliamentary republic in Europe. The country consists of 16 states while the capital and largest city is Berlin. Germany covers an area of 357,021 km2 and has a largely temperate seasonal climate...
, in 1945–46, at the Palace of Justice. The first and best known of these trials was the Trial of the Major War Criminals before the International Military Tribunal (IMT), which tried 24 of the most important captured leaders of Nazi Germany, though several key architects of the war (such as Adolf Hitler
Adolf Hitler
Adolf Hitler was an Austrian-born German politician and the leader of the National Socialist German Workers Party , commonly referred to as the Nazi Party). He was Chancellor of Germany from 1933 to 1945, and head of state from 1934 to 1945...
, Heinrich Himmler
Heinrich Himmler
Heinrich Luitpold Himmler was Reichsführer of the SS, a military commander, and a leading member of the Nazi Party. As Chief of the German Police and the Minister of the Interior from 1943, Himmler oversaw all internal and external police and security forces, including the Gestapo...
, and Joseph Goebbels
Joseph Goebbels
Paul Joseph Goebbels was a German politician and Reich Minister of Propaganda in Nazi Germany from 1933 to 1945. As one of Adolf Hitler's closest associates and most devout followers, he was known for his zealous oratory and anti-Semitism...
) had committed suicide before the trials began.

Do yuo think the trails where fair? did the allies have the right to trial the them?
More
x