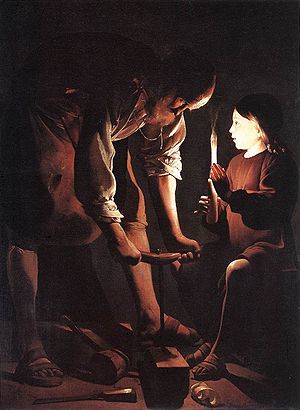 Georges de La Tour was a French Baroque painter, who spent most of his working life in the Duchy of Lorraine, which was temporarily absorbed into France between 1641 and 1648. He painted mostly religious chiaroscuro
Chiaroscuro
Chiaroscuro in art is "an Italian term which literally means 'light-dark'. In paintings the description refers to clear tonal contrasts which are often used to suggest the volume and modelling of the subjects depicted"....
scenes lit by candlelight.

Georges de La Tour was born in the town of Vic-sur-Seille
Vic-sur-Seille
Vic-sur-Seille is a commune in the Moselle department in Lorraine in north-eastern France.-See also:*Communes of the Moselle department*Parc naturel régional de Lorraine...
in the Diocese of Metz
Diocese of Metz
The Roman Catholic Diocese of Metz is a Diocese of the Latin Rite of the Roman Catholic church in France. In the Middle Ages it was in effect an independent state, part of the Holy Roman Empire, ruled by the bishop who had the ex officio title of count. It was annexed to France by King Henry II in...
, which was technically part of the Holy Roman Empire
Holy Roman Empire
The Holy Roman Empire was a realm that existed from 962 to 1806 in Central Europe.It was ruled by the Holy Roman Emperor. Its character changed during the Middle Ages and the Early Modern period, when the power of the emperor gradually weakened in favour of the princes...
, but had been ruled by France since 1552. Baptism documentation reveal that he was the son of Jean de La Tour, a baker, and Sybille de La Tour, née Molian. It has been suggested that Sybille came from a partly noble family. His parents had seven children in all, with Georges being the second-born.

La Tour's educational background remains somewhat unclear, but it is assumed that he travelled either to Italy or the Netherlands early in his career. He may possibly have trained under Jacques Bellange
Jacques Bellange
Jacques Bellange was an artist and printmaker from the Duchy of Lorraine whose etchings and some drawings are his only securely identified works today. They are among the most striking Mannerist old master prints, mostly on Catholic religious subjects, and with a highly individual style...
in Nancy, the capital of Lorraine, although their styles are very different. His paintings reflect the Baroque
Baroque
The Baroque is a period and the style that used exaggerated motion and clear, easily interpreted detail to produce drama, tension, exuberance, and grandeur in sculpture, painting, literature, dance, and music...
naturalism
Naturalism (art)
Naturalism in art refers to the depiction of realistic objects in a natural setting. The Realism movement of the 19th century advocated naturalism in reaction to the stylized and idealized depictions of subjects in Romanticism, but many painters have adopted a similar approach over the centuries...
of Caravaggio
Caravaggio
Michelangelo Merisi da Caravaggio was an Italian artist active in Rome, Naples, Malta, and Sicily between 1593 and 1610. His paintings, which combine a realistic observation of the human state, both physical and emotional, with a dramatic use of lighting, had a formative influence on the Baroque...
, but this probably reached him through the Dutch Caravaggisti of the Utrecht School
Utrecht School
Utrecht Caravaggism refers to those Baroque artists, all distinctly influenced by the art of Caravaggio, who were active mostly in the Dutch city of Utrecht during the early part of the seventeenth century....
and other Northern (French and Dutch) contemporaries. In particular, La Tour is often compared to the Dutch painter Hendrick Terbrugghen.

In 1617 he married Diane Le Nerf, from a minor noble family, and in 1620 he established his studio in her quiet provincial home-town of Lunéville
Lunéville
Lunéville is a commune in the Meurthe-et-Moselle department in France.It is a sub-prefecture of the department and lies on the Meurthe River.-History:...
, part of the independent Duchy of Lorraine which was absorbed into France, during his lifetime, in 1641. He painted mainly religious and some genre scenes. He was given the title "Painter to the King" (of France) in 1638, and he also worked for the Dukes of Lorraine in 1623–4, but the local bourgeoisie provided his main market, and he achieved a certain affluence. He is not recorded in Lunéville in 1639–42, and may have travelled again; Anthony Blunt
Anthony Blunt
Anthony Frederick Blunt , was a British art historian who was exposed as a Soviet spy late in his life.Blunt was Professor of the History of Art at the University of London, director of the Courtauld Institute of Art, Surveyor of the King's Pictures and London...
detected the influence of Gerrit van Honthorst in his paintings after this point. He was involved in a Franciscan
Franciscan
Most Franciscans are members of Roman Catholic religious orders founded by Saint Francis of Assisi. Besides Roman Catholic communities, there are also Old Catholic, Anglican, Lutheran, ecumenical and Non-denominational Franciscan communities....
-led religious revival in Lorraine, and over the course of his career he moved to painting almost entirely religious subjects, but in treatments with influence from genre painting.

Georges de la Tour and his family died in 1652 in an epidemic in Lunéville. His son Étienne (born 1621) was his pupil. 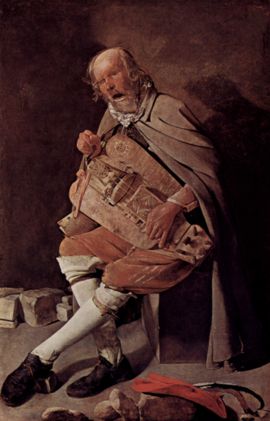 His early work shows influences from Caravaggio, probably via his Dutch followers, and the genre scenes of cheats—as in The Fortune Teller
The Fortune Teller (de La Tour painting)
The Fortune Teller is an oil painting of circa 1630 by the French artist Georges de La Tour. The work was uncovered in about 1960 and purchased that year by the Metropolitan Museum of Art in New York...
—and fighting beggars clearly derive from the Dutch Caravaggisti, and probably also his fellow-Lorrainer, Jacques Bellange
Jacques Bellange
Jacques Bellange was an artist and printmaker from the Duchy of Lorraine whose etchings and some drawings are his only securely identified works today. They are among the most striking Mannerist old master prints, mostly on Catholic religious subjects, and with a highly individual style...
. These are believed to date from relatively early in his career.

La Tour is best known for the nocturnal light effects which he developed much further than his artistic predecessors had done, and transferred their use in the genre subjects in the paintings of the Dutch Caravaggisti to religious painting in his. Unlike Caravaggio his religious paintings lack dramatic effects. He painted these in a second phase of his style, perhaps beginning in the 1640s, using chiaroscuro
Chiaroscuro
Chiaroscuro in art is "an Italian term which literally means 'light-dark'. In paintings the description refers to clear tonal contrasts which are often used to suggest the volume and modelling of the subjects depicted"....
, careful geometrical compositions, and very simplified painting of forms. His work moves during his career towards greater simplicity and stillness—taking from Caravaggio very different qualities than Jusepe de Ribera and his Tenebrist
Tenebrism
Tenebrism, from the Italian tenebroso , is a style of painting using very pronounced chiaroscuro, where there are violent contrasts of light and dark, and darkness becomes a dominating feature of the image...
followers did.

He often painted several variations on the same subjects, and his surviving output is relatively small. His son Étienne was his pupil, and distinguishing between their work in versions of La Tour's compositions is difficult. The version of the Education of the Virgin, in the Frick Collection
Frick Collection
The Frick Collection is an art museum located in Manhattan, New York City, United States.- History :It is housed in the former Henry Clay Frick House, which was designed by Thomas Hastings and constructed in 1913-1914. John Russell Pope altered and enlarged the building in the early 1930s to adapt...
in New York is an example, as the Museum itself admits. Another group of paintings (example left), of great skill but claimed to be different in style to those of La Tour, have been attributed to an unknown "Hurdy-gurdy Master". All show older male figures (one group in Malibu includes a female), mostly solitary, either beggars or saints.

After his death at Lunéville
Lunéville
Lunéville is a commune in the Meurthe-et-Moselle department in France.It is a sub-prefecture of the department and lies on the Meurthe River.-History:...
in 1652, La Tour's work was forgotten until rediscovered by Hermann Voss, a German scholar, in 1915; some of La Tour's work had in fact been confused with Vermeer
Johannes Vermeer
Johannes, Jan or Johan Vermeer was a Dutch painter who specialized in exquisite, domestic interior scenes of middle class life. Vermeer was a moderately successful provincial genre painter in his lifetime...
, when the Dutch artist underwent his own rediscovery in the nineteenth century. In 1935 an exhibition in Paris began the revival in interest among a wider public. In the twentieth century a number of his works were identified once more, and forgers
Art forgery
Art forgery is the creation of works of art which are falsely attributed to other, usually more famous, artists. Art forgery can be extremely lucrative, but modern dating and analysis techniques have made the identification of forged artwork much simpler....
tried to help meet the new demand; many aspects of his œuvre remain controversial among art historian.

A reference to a work purportedly by de La Tour is featured prominently in the 2003
2003 in film
The year 2003 in film involved some significant events. Releases of sequels took place with movies like The Lord of the Rings: The Return of the King, 2 Fast 2 Furious, Charlie's Angels: Full Throttle, The Matrix Reloaded, The Matrix Revolutions, Pokémon Heroes, Terminator 3: Rise of the Machines,...
Merchant Ivory
Merchant Ivory Productions
Merchant Ivory Productions is a film company founded in 1961 by producer Ismail Merchant and director James Ivory. Their films were for the most part produced by the former, directed by the latter, and scripted by Ruth Prawer Jhabvala, with the noted exception of a few films. The films were often...
film Le Divorce
Le Divorce
Le Divorce is a 2003 Merchant Ivory Productions' film directed by James Ivory and the screenplay by Ruth Prawer Jhabvala and Ivory, based on Diane Johnson's bestselling novel.-Summary:...
.

Magdalene with the Smoking Flame (not Penitent Magdalene) is the painting in Ariel's grotto she longingly motions toward when she yearns to know about fire while singing "Part of Your World" in Disney's 1989 film The Little Mermaid
The Little Mermaid (1989 film)
The Little Mermaid is a 1989 American animated film produced by Walt Disney Feature Animation and based on the Hans Christian Andersen fairy tale of the same name. Distributed by Walt Disney Pictures, the film was originally released to theaters on November 14, 1989 and is the twenty-eighth film in...
.