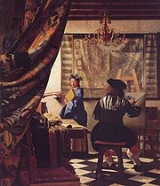 Overview
Johannes, Jan or Johan Vermeer (joˈhɑnəs jɑn ʋərˈmeːr; baptized in Delft
Delft
Delft is a city and municipality in the province of South Holland , the Netherlands. It is located between Rotterdam and The Hague....
on 31 October 1632 as Joannis, and buried in the same city under the name Jan on 15 December 1675) was a Dutch
Netherlands
The Netherlands is a constituent country of the Kingdom of the Netherlands, located mainly in North-West Europe and with several islands in the Caribbean. Mainland Netherlands borders the North Sea to the north and west, Belgium to the south, and Germany to the east, and shares maritime borders...
painter
Painting
Painting is the practice of applying paint, pigment, color or other medium to a surface . The application of the medium is commonly applied to the base with a brush but other objects can be used. In art, the term painting describes both the act and the result of the action. However, painting is...
who specialized in exquisite, domestic interior scenes of middle class life. Vermeer was a moderately successful provincial genre painter in his lifetime. He seems never to have been particularly wealthy, leaving his wife and children in debt at his death, perhaps because he produced relatively few paintings.

Vermeer worked slowly and with great care, using bright colours and sometimes expensive pigment
Pigment
A pigment is a material that changes the color of reflected or transmitted light as the result of wavelength-selective absorption. This physical process differs from fluorescence, phosphorescence, and other forms of luminescence, in which a material emits light.Many materials selectively absorb...
s, with a preference for cornflower blue
Cornflower blue
Cornflower blue, a shade of azure, is a shade of light blue with relatively little green compared to blue. This color was one of the favorites of the Dutch painter Johannes Vermeer, the other being yellow....
and yellow.

What were some of his most important works?