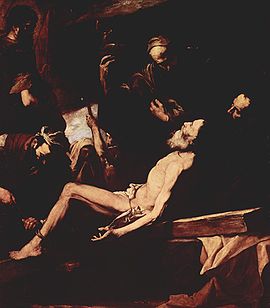 Tenebrism, from the Italian
Italian language
Italian is a Romance language spoken mainly in Europe: Italy, Switzerland, San Marino, Vatican City, by minorities in Malta, Monaco, Croatia, Slovenia, France, Libya, Eritrea, and Somalia, and by immigrant communities in the Americas and Australia...
tenebroso (murky), (also called dramatic illumination) is a style of painting
Painting
Painting is the practice of applying paint, pigment, color or other medium to a surface . The application of the medium is commonly applied to the base with a brush but other objects can be used. In art, the term painting describes both the act and the result of the action. However, painting is...
using very pronounced chiaroscuro
Chiaroscuro
Chiaroscuro in art is "an Italian term which literally means 'light-dark'. In paintings the description refers to clear tonal contrasts which are often used to suggest the volume and modelling of the subjects depicted"....
, where there are violent contrasts of light
Light
Light or visible light is electromagnetic radiation that is visible to the human eye, and is responsible for the sense of sight. Visible light has wavelength in a range from about 380 nanometres to about 740 nm, with a frequency range of about 405 THz to 790 THz...
and dark
Darkness
Darkness, in contrast with brightness, is a relative absence of visible light. It is the appearance of black in a color space. When light is not present, rod and cone cells within the eye are not stimulated. This lack of stimulation means photoreceptor cells are unable to distinguish color...
, and darkness becomes a dominating feature of the image. Da Vinci is generally credited with the invention of the style, but the term "Tenebrist" is more likely to be applied to later painters under his influence. However, Caravaggio
Caravaggio
Michelangelo Merisi da Caravaggio was an Italian artist active in Rome, Naples, Malta, and Sicily between 1593 and 1610. His paintings, which combine a realistic observation of the human state, both physical and emotional, with a dramatic use of lighting, had a formative influence on the Baroque...
, a Baroque artist, is so closely associated with Tenebrism, that the word "Caravaggism" is sometimes applied in an almost synonymous fashion, or the phrase "Caravaggesque tenebrism" is sometimes used. The term is less used by art historians in recent decades, and lacks a clear definition. The word is capitalised by some art historians, and not by others.

The term is usually applied to artists from the seventeenth century onwards, although Tintoretto
Tintoretto
Tintoretto , real name Jacopo Comin, was a Venetian painter and a notable exponent of the Renaissance school. For his phenomenal energy in painting he was termed Il Furioso...
and El Greco
El Greco
El Greco was a painter, sculptor and architect of the Spanish Renaissance. "El Greco" was a nickname, a reference to his ethnic Greek origin, and the artist normally signed his paintings with his full birth name in Greek letters, Δομήνικος Θεοτοκόπουλος .El Greco was born on Crete, which was at...
are sometimes described as Tenebrists. El Greco painted three versions of a composition with a boy, a man and a monkey grouped in darkness around a single flame. Among the most well-known Tenebrist artists are: Italian and Dutch followers (the Utrecht School
Utrecht School
Utrecht Caravaggism refers to those Baroque artists, all distinctly influenced by the art of Caravaggio, who were active mostly in the Dutch city of Utrecht during the early part of the seventeenth century....
) of Caravaggio, Francisco Ribalta
Francisco Ribalta
Francesc Ribalta , also known as Francisco Ribaltá or de Ribalta, was a Spanish painter of the Baroque period, mostly of religious subjects.He was born in Solsona, Lleida...
, Jusepe de Ribera and their Spanish followers. Tenebrism is most often applied to 17th century Spanish painters. It is sometimes applied to other 17th century painters including Georges de La Tour
Georges de La Tour
Georges de La Tour was a French Baroque painter, who spent most of his working life in the Duchy of Lorraine, which was temporarily absorbed into France between 1641 and 1648...
, who painted many images lit by a single candle, Gerrit van Honthorst, and Rembrandt.

The term is not often used of Adam Elsheimer
Adam Elsheimer
Adam Elsheimer was a German artist working in Rome who died at only thirty-two, but was very influential in the early 17th century. His relatively few paintings were small scale, nearly all painted on copper plates, of the type often known as cabinet paintings. They include a variety of light...
, although he was an important innovator in painting night-scenes with a few lighted areas. His dark areas are always full of detail and interest.

Later, similar compositions were painted by Joseph Wright of Derby
Joseph Wright of Derby
Joseph Wright , styled Wright of Derby, was an English landscape and portrait painter. He has been acclaimed as "the first professional painter to express the spirit of the Industrial Revolution"....
and other artists of the Romantic Movement
Romanticism
Romanticism was an artistic, literary and intellectual movement that originated in the second half of the 18th century in Europe, and gained strength in reaction to the Industrial Revolution...
, but the term is rarely used to characterize their work in general.