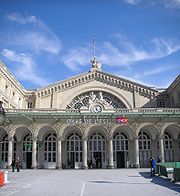 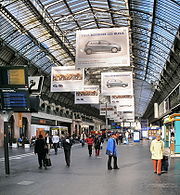 The Gare de l'Est was opened in 1849 by the Compagnie du Chemin de Fer de Paris à Strasbourg (the Paris-Strasbourg Railway Company) under the name "Strasbourg platform." This platform corresponds today with the hall for main-line trains, and was designed by the architect François Duquesney. It was renamed the "Gare de l'Est" in 1854, after the expansion of service to Mulhouse
Mulhouse
Mulhouse |mill]] hamlet) is a city and commune in eastern France, close to the Swiss and German borders. With a population of 110,514 and 278,206 inhabitants in the metropolitan area in 2006, it is the largest city in the Haut-Rhin département, and the second largest in the Alsace region after...
.

Renovations to the station followed in 1885 and 1900. In 1931 it was doubled in size, with the new part of the station built symmetrically with the old part. This transformation changed the surrounding neighborhood significantly.

At the top of the west façade
Facade
A facade or façade is generally one exterior side of a building, usually, but not always, the front. The word comes from the French language, literally meaning "frontage" or "face"....
of the Gare de l'Est is a statue by the sculptor Philippe Joseph Henri Lemaire
Philippe Joseph Henri Lemaire
[Philippe Joseph] Henri Lemaire was a French sculptor, working in a neoclassical academic style. He was a pupil of Pierre Cartellier, and won the Prix de Rome for sculpture in 1821....
, representing the city of Strasbourg
Strasbourg
Strasbourg is the capital and principal city of the Alsace region in eastern France and is the official seat of the European Parliament. Located close to the border with Germany, it is the capital of the Bas-Rhin département. The city and the region of Alsace are historically German-speaking,...
, while the east end of the station is crowned by a statue personifying Verdun
Verdun
Verdun is a city in the Meuse department in Lorraine in north-eastern France. It is a sub-prefecture of the department.Verdun is the biggest city in Meuse, although the capital of the department is the slightly smaller city of Bar-le-Duc.- History :...
, by Varenne. These two cities are important destinations serviced by Gare de l'Est.

The Gare de l'Est is the terminus of a strategic railway network extending towards the eastern part of France, and it saw large mobilizations of French troops, most notably in 1914, at the beginning of World War I. In the main-line train hall, a monumental painting by Albert Herter
Albert Herter
Albert Herter was an artist and painter. He was born in New York, New York, and studied in Paris and then in New York's Art Students League...
, dating from 1926, illustrates the departure of these soldiers for the Western front.

SNCF started LGV Est Europeen
LGV Est
The LGV Est européenne is an extension to the French high-speed rail network, connecting currently Vaires-sur-Marne and Baudrecourt , and later Vaires-sur-Marne and Vendenheim . , it is the newest high-speed line in France and still under construction, with of a planned in service...
services from the Gare de l'Est on 10 June 2007, with TGV
TGV
The TGV is France's high-speed rail service, currently operated by SNCF Voyages, the long-distance rail branch of SNCF, the French national rail operator....
and ICE
InterCityExpress
The Intercity-Express or ICE is a system of high-speed trains predominantly running in Germany and neighbouring countries. It is the highest service category offered by DB Fernverkehr and is the flagship of Deutsche Bahn...
services to north-eastern France, Luxembourg, southern Germany and Switzerland. Trains are initially planned to run at 320 km/h (198 mph), with the potential to run at 350 km/h (217 mph), cutting travel times by up to 2 hours.

Important destinations served by trains from the Gare de l'Est