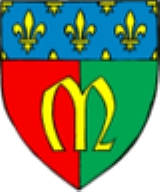 Encyclopedia
Meaux is a commune
Communes of France
The commune is the lowest level of administrative division in the French Republic. French communes are roughly equivalent to incorporated municipalities or villages in the United States or Gemeinden in Germany...
in the Seine-et-Marne
Seine-et-Marne
Seine-et-Marne is a French department, named after the Seine and Marne rivers, and located in the Île-de-France region.- History:Seine-et-Marne is one of the original 83 departments, created on March 4, 1790 during the French Revolution in application of the law of December 22, 1789...
department in the Île-de-France
Île-de-France (région)
Île-de-France is the wealthiest and most populated of the twenty-two administrative regions of France, composed mostly of the Paris metropolitan area....
region
Régions of France
France is divided into 27 administrative regions , 22 of which are in Metropolitan France, and five of which are overseas. Corsica is a territorial collectivity , but is considered a region in mainstream usage, and is even shown as such on the INSEE website...
in the metropolitan area
Aire urbaine
The aire urbaine is a statistical region created by the INSEE that comprises a commuter belt surrounding a contiguous urban core...
of Paris
Paris
Paris is the capital and largest city in France, situated on the river Seine, in northern France, at the heart of the Île-de-France region...
, France
France
The French Republic , The French Republic , The French Republic , (commonly known as France , is a unitary semi-presidential republic in Western Europe with several overseas territories and islands located on other continents and in the Indian, Pacific, and Atlantic oceans. Metropolitan France...
. It is located 41.1 km (25.5 mi) east-northeast from the center of Paris
Kilometre Zero
In many countries, Kilometre Zero or similar terms in other languages, is a particular location , from which distances are traditionally measured...
. Meaux is a sub-prefecture of the department and the seat of an arondissement. Although it is the most populous commune in the Seine-et-Marne, it is not the capital, which is Melun
Melun
Melun is a commune in the Seine-et-Marne department in the Île-de-France region in north-central France. Located in the south-eastern suburbs of Paris, Melun is the capital of the department, as the seat of an arrondissement...
.

Meaux is known for Brie de Meaux
Brie de Meaux
Brie de Meaux is a French brie cheese of the Brie region and a designated AOC product since 1980. Its name comes from the Brie region and the town of Meaux. As of 2003, 6,774 tonnes were produced.-Description:...
(a variety of Brie cheese
Brie (cheese)
Brie is a soft cow's cheese named after Brie, the French region from which it originated . It is pale in color with a slight grayish tinge under a rind of white mold; very soft and savory with a hint of ammonia...
) and the local variety of mustard
Mustard (condiment)
Mustard is a condiment made from the seeds of a mustard plant...
. 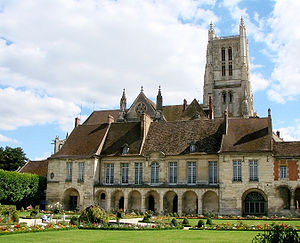 Meaux was the capital of the ancient Gaul
Gaul
Gaul was a region of Western Europe during the Iron Age and Roman era, encompassing present day France, Luxembourg and Belgium, most of Switzerland, the western part of Northern Italy, as well as the parts of the Netherlands and Germany on the left bank of the Rhine. The Gauls were the speakers of...
ish tribe of the Meldi.

The Siege of Meaux was fought in 1422 between the English, under Henry V, and the French during the Hundred Years' War. The town's defence was led by the Bastard of Vaurus, by all accounts cruel and evil, but a brave commander all the same. The siege commenced in October and mining and bombardment soon brought down the walls. Casualties began to mount in the English army, including John Clifford, 7th Baron de Clifford
John Clifford, 7th Baron de Clifford
Sir John Clifford, 7th Baron de Clifford, also 7th Lord of Skipton, KG , hereditary High Sheriff of Westmorland was an English peer.-Life:...
who had been at the siege of Harfleur, the Battle of Agincourt, and received the surrender of Cherbourg. The English also began to fall sick rather early into the siege, and it is estimated that one sixteenth of the besiegers died from dysentery and smallpox. On 9 March 1422, the town surrendered, although the garrison held out. Under continued bombardment, the garrison gave in as well on 10 March, following a siege of 8 months. The Bastard of Vaurus was decapitated, as was a trumpeter named Orace, who had once mocked Henry.