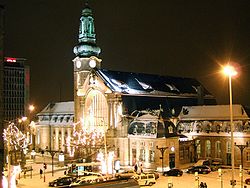 It is the central hub of Luxembourg's domestic railway network, serving as a terminus for all but one of Luxembourg's railway lines (the exception being Line 80
CFL Line 80
Line 80 is a Luxembourgian railway line connecting Rodange to Belgium. It is designated Chemins de Fer Luxembourgeois, but predominantly operated by NMBS/SNCB. The services overlap with those designated as Line 70...
, which only stops at one station in Luxembourg). It also functions as the country's international railway station, with services into each of the surrounding countries: Belgium
Belgium
Belgium , officially the Kingdom of Belgium, is a federal state in Western Europe. It is a founding member of the European Union and hosts the EU's headquarters, and those of several other major international organisations such as NATO.Belgium is also a member of, or affiliated to, many...
, France
France
The French Republic , The French Republic , The French Republic , (commonly known as France , is a unitary semi-presidential republic in Western Europe with several overseas territories and islands located on other continents and in the Indian, Pacific, and Atlantic oceans. Metropolitan France...
, and Germany
Germany
Germany , officially the Federal Republic of Germany , is a federal parliamentary republic in Europe. The country consists of 16 states while the capital and largest city is Berlin. Germany covers an area of 357,021 km2 and has a largely temperate seasonal climate...
. Since June 2007, the LGV Est
LGV Est
The LGV Est européenne is an extension to the French high-speed rail network, connecting currently Vaires-sur-Marne and Baudrecourt , and later Vaires-sur-Marne and Vendenheim . , it is the newest high-speed line in France and still under construction, with of a planned in service...
has connected the station to the French TGV
TGV
The TGV is France's high-speed rail service, currently operated by SNCF Voyages, the long-distance rail branch of SNCF, the French national rail operator....
network.

The station has some voltage-switchable tracks for Line 50
CFL Line 50
Line 50 is a Luxembourgian railway line connecting Luxembourg City to the west of the country, leading to Kleinbettingen and on to Arlon, in south-eastern Belgium. The terminus at the eastern end is Luxembourg railway station...
to Arlon, which is electrified with the Belgian voltage of 3kV DC.

The original train station was built entirely from timber
Timber
Timber may refer to:* Timber, a term common in the United Kingdom and Australia for wood materials * Timber, Oregon, an unincorporated community in the U.S...
, and was opened in 1859. The position of the new station on the south bank of the Pétrusse, away from the original built-up area of the city, was on account of Luxembourg's role as a German Confederation
German Confederation
The German Confederation was the loose association of Central European states created by the Congress of Vienna in 1815 to coordinate the economies of separate German-speaking countries. It acted as a buffer between the powerful states of Austria and Prussia...
fortress. The first connection to the city proper came in 1861, with the construction of the Passerelle
Passerelle
The Passerelle, also known as the Luxembourg Viaduct, is a viaduct in Luxembourg City, in southern Luxembourg. It runs southwards from the city centre, Ville Haute, carrying road traffic across the Pétrusse valley and connecting Boulevard Franklin Delano Roosevelt to Avenue de la Gare...
viaduct
Viaduct
A viaduct is a bridge composed of several small spans. The term viaduct is derived from the Latin via for road and ducere to lead something. However, the Ancient Romans did not use that term per se; it is a modern derivation from an analogy with aqueduct. Like the Roman aqueducts, many early...
. After the 1867 Treaty of London
Treaty of London, 1867
The Treaty of London , often called the Second Treaty of London after the 1839 Treaty, was an international treaty signed on 11 May 1867. Agreed in the aftermath of the Austro-Prussian War and the Luxembourg Crisis, it had wide-reaching consequences for Luxembourg and for relations between...
, the fortifications were demolished, leading to the expansion of the city around the station.

The old wooden station was replaced by the modern building between 1907 and 1913, at the height of an economic boom, fuelled by iron from the Red Lands
Red Lands
The Red Lands form a geographic region in southern and south-western Luxembourg. They are called this way for their red iron-laden earth.The Red Lands roughly correspond with the southern part of the canton of Esch-sur-Alzette, along the border with France...
. The new station was designed by a trio of German
German Empire
The German Empire refers to Germany during the "Second Reich" period from the unification of Germany and proclamation of Wilhelm I as German Emperor on 18 January 1871, to 1918, when it became a federal republic after defeat in World War I and the abdication of the Emperor, Wilhelm II.The German...
architects (Rüdell, Jüsgen, and Scheuffel) in the Moselle
Moselle River
The Moselle is a river flowing through France, Luxembourg, and Germany. It is a left tributary of the Rhine, joining the Rhine at Koblenz. A small part of Belgium is also drained by the Mosel through the Our....
Baroque Revival style that dominates Luxembourg's major public buildings. The station lies at the end of the Avenue de la Liberté
Avenue de la Liberté
Avenue de la Liberté is a street in Luxembourg City, in southern Luxembourg. The avenue is a one-way arterial road, with four lanes conveying traffic from the north of the Gare quarter to the south of that quarter, at Luxembourg railway station....
, one of the city's major thoroughfare
Thoroughfare
A thoroughfare is a place of transportation intended to connect one location to another. Highways, roads, and trails are examples of thoroughfares used by a variety of general traffic. On land a thoroughfare may refer to anything from a rough trail to multi-lane highway with grade separated...
s, and its imposing clock tower
Clock tower
A clock tower is a tower specifically built with one or more clock faces. Clock towers can be either freestanding or part of a church or municipal building such as a town hall. Some clock towers are not true clock towers having had their clock faces added to an already existing building...
can be seen from a considerable distance.

Since 2006, under the auspices of the Ministry of Transport, Luxembourg station has been undergoing major renovation work which, by 2009, had already resulted in new ticketing and sales facilities inside the main hall, widening of the platforms, new lifts and a new passenger subway. Future work will include renewal of the overhead electrical wiring
Overhead lines
Overhead lines or overhead wires are used to transmit electrical energy to trams, trolleybuses or trains at a distance from the energy supply point...
, installation of two platform escalators, a new entrance porch and a redesigned forecourt. In 2011, work will start on a glass passenger hall and on a four-storey car park, to be completed in 2012.