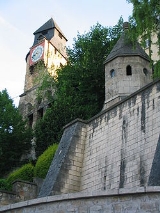 Encyclopedia
Bar-le-Duc, formerly known as Bar, is a commune
Communes of France
The commune is the lowest level of administrative division in the French Republic. French communes are roughly equivalent to incorporated municipalities or villages in the United States or Gemeinden in Germany...
in the Meuse
Meuse
Meuse is a department in northeast France, named after the River Meuse.-History:Meuse is one of the original 83 departments created during the French Revolution on March 4, 1790...
département, of which it is the préfecture (capital). The department is in Lorraine
Lorraine (région)
Lorraine is one of the 27 régions of France. The administrative region has two cities of equal importance, Metz and Nancy. Metz is considered to be the official capital since that is where the regional parliament is situated...
in north-eastern France

The lower, more modern and busier part of the town extends along a narrow valley, shut in by wooded or vine
Vine
A vine in the narrowest sense is the grapevine , but more generally it can refer to any plant with a growth habit of trailing or scandent, that is to say climbing, stems or runners...
-clad hills, and is traversed throughout its length by the Ornain
Ornain
The Ornain is a 116 km long river in northeastern France, right tributary of the Saulx . It is formed near the village Gondrecourt-le-Château by the confluence of the small rivers Ognon and Maldite. It flows generally northwest...
, which is crossed by several bridges. It is limited towards the north-east by the Marne-Rhine Canal
Marne-Rhine Canal
The Marne-Rhine Canal is a canal in north eastern France. It connects the river Marne in Vitry-le-François with the Rhine in Strasbourg. Combined with the canalised part of the Marne, it allows transport between Paris and eastern France. The original objective of the canal was to connect Paris...
, on the south-west by a small arm of the Ornain, called the Canal des Usines, on the left bank of which the upper town (Ville Haute) is situated.

Bar-le-Duc was at one time the seat of the countship, later duchy
Duchy
A duchy is a territory, fief, or domain ruled by a duke or duchess.Some duchies were sovereign in areas that would become unified realms only during the Modern era . In contrast, others were subordinate districts of those kingdoms that unified either partially or completely during the Medieval era...
, of Bar. Though probably of ancient origin, the town was unimportant till the 10th century when it became the residence of the counts. Originally part of the early medieval duchy of Upper Lorraine, at some stage in the early modern period it was acquired by the neighbouring dukes of Lorraine
Lorraine (province)
The Duchy of Upper Lorraine was an historical duchy roughly corresponding with the present-day northeastern Lorraine region of France, including parts of modern Luxembourg and Germany. The main cities were Metz, Verdun, and the historic capital Nancy....
. 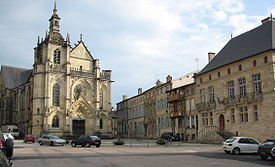 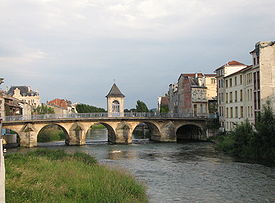 The Ville Haute, which is reached by staircases and steep narrow thoroughfares, is intersected by a long, quiet street, bordered by houses of the 15th, 16th and 17th centuries. In this quarter are the remains (16th century) of the chateau of the dukes of Bar, dismantled in 1670, the old clock-tower, and the college, built in the latter half of the 16th century. Its church of Saint-Étienne (constructed during the 14th and 15th centuries) contains a skillfully-carved effigy in white stone of a half-decayed corpse, erected to the memory of René of Châlon
René of Châlon
René of Châlon , also known as Renatus of Châlon, was a Prince of Orange and stadtholder of Holland, Zeeland, Utrecht and Gelre....
(d. 1544), the work of 16th century artist Ligier Richier
Ligier Richier
Ligier Richier was a French sculptor active in Saint-Mihiel.Richier primarily worked in the churches of his native Saint-Mihiel. From 1530, he was under the protection of Duke Antoine of Lorraine, for whom he did important work. Ligier Richier did work in wood, but preferred pale, soft limestone...
, a pupil of Michelangelo
Michelangelo
Michelangelo di Lodovico Buonarroti Simoni , commonly known as Michelangelo, was an Italian Renaissance painter, sculptor, architect, poet, and engineer who exerted an unparalleled influence on the development of Western art...
.

The lower town contains the official buildings and the churches of Notre-Dame, the most ancient in the town, and St. Antony, with 14th century frescoes. Among the statues of distinguished natives of the town is one to Nicolas Oudinot
Nicolas Oudinot
Nicolas Charles Oudinot, 1st Comte Oudinot, 1st Duc de Reggio , was a Marshal of France.-Early life:...
, whose house serves as the hotel-de-ville. Other sights include the Notre-Dame Bridge, with five arches surmounted by a chapel in the middle.

Bar-le-Duc is twinned with: Tambov
Tambov
Tambov is a city and the administrative center of Tambov Oblast, Russia, located at the confluence of the Tsna and Studenets Rivers southeast of Moscow...
, Russia Griesheim
Griesheim
Griesheim is a town in the Darmstadt-Dieburg district, in Hessen, Germany. It is situated approx. 7 km west of Darmstadt.-History:...
, Germany Wilkau-Haßlau
Wilkau-Haßlau
Wilkau-Haßlau is a town in the Zwickau district, in the Free State of Saxony, Germany. It is situated on the river Zwickauer Mulde, about 6 km south of Zwickau....
, Germany Gyönk
Gyönk
-History:Gyönk was mentioned for the first time in 1280, but the neighborhood was already a populated area by then. The village was inhabited by Turks for some time, and the time of Rákóczi it was depopulated. In the early 1700s Hungarian and German families arrived in the village. The school was...
, Hungary