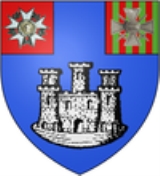 It has a population of 31,000 (2003 figure) and is a subprefecture of the department. Although Saint-Dizier is marginally the most populous commune in Haute-Marne, the préfecture (capital) resides in the somewhat smaller commune of Chaumont
Chaumont, Haute-Marne
Chaumont is a commune of France, and the capital of the Haute-Marne department. , it has a of 24,039.The city stands on the Marne River and is situated on the railway linking Paris and Basel, which runs over a 52 m tall and 600 m long viaduct built in 1856.- History :Historically the...
.

Located approximately 120 miles (193 km) east of Paris
Paris
Paris is the capital and largest city in France, situated on the river Seine, in northern France, at the heart of the Île-de-France region...
, halfway to Strasbourg
Strasbourg
Strasbourg is the capital and principal city of the Alsace region in eastern France and is the official seat of the European Parliament. Located close to the border with Germany, it is the capital of the Bas-Rhin département. The city and the region of Alsace are historically German-speaking,...
, it is five miles from Western Europe's largest man-made lake, Lake Der-Chantecoq
Lake Der-Chantecoq
Lake Der-Chantecoq is situated close to the commune of Saint-Dizier in the departments of Marne and Haute-Marne. It is the largest artificial lake in Western Europe, covering 48 km² with 350 million m³ of water...
.

The town originated as a fortified settlement around a thirteenth century château
Château
A château is a manor house or residence of the lord of the manor or a country house of nobility or gentry, with or without fortifications, originally—and still most frequently—in French-speaking regions...
, eventually becoming a royal fortress to guard the French kingdom's eastern approaches. The town was besieged and captured by Charles V, Holy Roman Emperor
Charles V, Holy Roman Emperor
Charles V was ruler of the Holy Roman Empire from 1519 and, as Charles I, of the Spanish Empire from 1516 until his voluntary retirement and abdication in favor of his younger brother Ferdinand I and his son Philip II in 1556.As...
, in the summer of 1544. A fire in 1775 destroyed two-thirds of the town centre. The château was owned by the Orléans family
House of Orleans
Orléans is the name used by several branches of the Royal House of France, all descended in the legitimate male line from the dynasty's founder, Hugh Capet. It became a tradition during France's ancien régime for the duchy of Orléans to be granted as an appanage to a younger son of the king...
until the French Revolution
French Revolution
The French Revolution , sometimes distinguished as the 'Great French Revolution' , was a period of radical social and political upheaval in France and Europe. The absolute monarchy that had ruled France for centuries collapsed in three years...
, was a base for German troops during World War II
World War II
World War II, or the Second World War , was a global conflict lasting from 1939 to 1945, involving most of the world's nations—including all of the great powers—eventually forming two opposing military alliances: the Allies and the Axis...
, and currently houses the Municipal Museum.

Saint-Dizier is the birthplace of