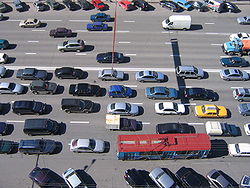 The Garden Ring, also known as the "B" Ring , is a circular avenue
Avenue (landscape)
__notoc__In landscaping, an avenue or allée is traditionally a straight route with a line of trees or large shrubs running along each, which is used, as its French source venir indicates, to emphasize the "coming to," or arrival at a landscape or architectural feature...
around the central Moscow
Moscow
Moscow is the capital, the most populous city, and the most populous federal subject of Russia. The city is a major political, economic, cultural, scientific, religious, financial, educational, and transportation centre of Russia and the continent...
, its course corresponding to what used to be the city ramparts surrounding Zemlyanoy Gorod
Zemlyanoy Gorod
Zemlyanoy Gorod in 17th-century Moscow was the outer ring of the city, surrounded by ramparts and a moat.It surrounded the older moat built by Aloisio the New in the early 16th century which delimited Bely Gorod....
in the 17th century.

The Ring consists of seventeen individually named streets and fifteen squares. It has a circumference
Circumference
The circumference is the distance around a closed curve. Circumference is a special perimeter.-Circumference of a circle:The circumference of a circle is the length around it....
of sixteen kilometres. At its narrowest point, Krymsky Bridge
Krymsky Bridge
Krymsky Bridge or Crimean Bridge is a steel suspension bridge in Moscow. The bridge spans the Moskva River 1,800 metres south-west from the Kremlin and carries the Garden Ring across the river. The bridge links the Crimean Square to the north with Krymsky Val street to the south...
, the Ring has six lanes; at its widest, Zubovskaya Square, it has eighteen lanes. The Ring emerged in the 1820s, replacing fortifications, in the form of ramparts
Defensive wall
A defensive wall is a fortification used to protect a city or settlement from potential aggressors. In ancient to modern times, they were used to enclose settlements...
, that were no longer of military value.

Garden Ring is a direct descendant of the Skorodom (Скородом, literally Quick Building) and Earth Rampart (Земляной Вал, Zemlyanoy Val) fortifications, erected in the reign of Feodor I of Russia
Feodor I of Russia
Fyodor I Ivanovich 1598) was the last Rurikid Tsar of Russia , son of Ivan IV and Anastasia Romanovna. In English he is sometimes called Feodor the Bellringer in consequence of his strong faith and inclination to travel the land and ring the bells at churches. However, in Russian the name...
after a disastrous raid by Ğazı II Giray (1591). Although Boris Godunov
Boris Godunov
Boris Fyodorovich Godunov was de facto regent of Russia from c. 1585 to 1598 and then the first non-Rurikid tsar from 1598 to 1605. The end of his reign saw Russia descend into the Time of Troubles.-Early years:...
, de-facto regent
Regent
A regent, from the Latin regens "one who reigns", is a person selected to act as head of state because the ruler is a minor, not present, or debilitated. Currently there are only two ruling Regencies in the world, sovereign Liechtenstein and the Malaysian constitutive state of Terengganu...
of Russia, prevented Crimeans
Crimean Tatars
Crimean Tatars or Crimeans are a Turkic ethnic group that originally resided in Crimea. They speak the Crimean Tatar language...
from taking the city north of Moskva River
Moskva River
The Moskva River is a river that flows through the Moscow and Smolensk Oblasts in Russia, and is a tributary of the Oka River.-Etymology:...
, he anticipated future raids and arranged construction of another defence ring. 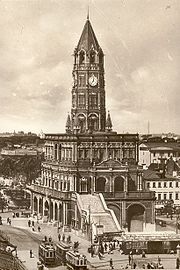 When the Time of troubles
Time of troubles
Time of troubles can refer to:*a general period in Arnold Toynbee's model of the lifecycle of civilizations *Time of Troubles, a particular period in early 17th-century Russian history...
ended, instead of rebuilding Skorodom, Mikhail Romanov government replaced it with a new, taller rampart known as Zemlyanoy Val (Земляной Вал, Earth Rampart), completed in 1630-1638. Its name survives in present-day Zemlyanoy Val Street (former Chkalov Street) in the south-eastern segment of Garden Ring.

Instead of towers, the Rampart had 34 gates for passage. As a defense measure, Streltsy
Streltsy
Streltsy were the units of Russian guardsmen in the 16th - early 18th centuries, armed with firearms. They are also collectively known as Marksman Troops .- Origins and organization :...
sloboda
Sloboda
Sloboda was a kind of settlement in the history of Russia, Belarus and Ukraine. The name is derived from the early Slavic word for "freedom" and may be vaguely translated as "free settlement"....
s were located next to these gates, especially in southern Yakimanka
Yakimanka District
Yakimanka District is a district of Central Administrative Okrug of Moscow, Russia. Population: It is named after the former church of Saint Joachim and Saint Anne...
and Zamoskvorechye Districts. Effective against Tatar raiders, Streltsy were politically unstable. After Streltsy Uprising
Streltsy Uprising
The Streltsy Uprising of 1698 was an uprising of the Moscow Streltsy regiments. Some Russian historians believe that the Streltsy uprising was a reactionary rebellion against progressive innovations of Peter the Great...
of 1698, Peter I
Peter I of Russia
Peter the Great, Peter I or Pyotr Alexeyevich Romanov Dates indicated by the letters "O.S." are Old Style. All other dates in this article are New Style. ruled the Tsardom of Russia and later the Russian Empire from until his death, jointly ruling before 1696 with his half-brother, Ivan V...
arranged mass executions of Streltsy on the Earth Rampart, hanging 36 soldiers at each of Zamoskoverchye gates and 56 at Taganka
Taganka
Tagansky District is a district of Central Administrative Okrug of Moscow, Russia, located between the Moskva River and the Yauza River near the mouth of the latter. Population:...
gates; the remainder of Streltsy troops were disbanded by the end of Peter's reign. In 1683-1718, the Rampart served as Moscow customs border; traders, evading taxation, set numerous markets right outside of city gates; the last of these, Zatsepa Market, was closed in 1970s. Eventually, Peter I lifted this taxation in 1722, but it resumed in 1730s at the new city border, Kamer-Kollezhsky Val
Kamer-Kollezhsky Val
Kamer-Kollezhsky Val is a ring of streets around the center of Moscow, Russia. It is the third historical ring of Moscow , with a total length of 37 kilometers, partially integrated into the modern Third Ring circular highway...
.

The rampart lost its military value in 18th century; in fact, many segments of the rampart were built out with private and state properties, including triumphal Red Gates and similat triumphal arch in Triumphalnaya Square (continuously rebuilt in 1721, 1731, 1742, 1762 and 1775). In the same 1775, local authorities entertained the idea of restoring the rampart but were set back by the number of state institutions that had to be demolished. The Fire of Moscow (1812)
Fire of Moscow (1812)
The 1812 Fire of Moscow broke out on September 14, 1812 in Moscow on the day when Russian troops and most residents abandoned the city and Napoleon's vanguard troops entered the city following the Battle of Borodino...
destroyed these properties, so nothing stood in the way of city development plans.

Instead of rebuilding the useless rampart, the city levelled it; census records set demolition date as 1818-1826. The new free land was developed according to local social status: upper-class western segment of the Ring acquired central boulevard
Boulevard
A Boulevard is type of road, usually a wide, multi-lane arterial thoroughfare, divided with a median down the centre, and roadways along each side designed as slow travel and parking lanes and for bicycle and pedestrian usage, often with an above-average quality of landscaping and scenery...
s, flanged by side streets. Present-day streets in this segments are still called Boulevards (Zubovsky Boulevard, etc.). Elsewhere, Garden Ring was set as a 10-20 sazhen (22–43 meters) wide street; unused side territories were allocated to existing homeowners on condition that they plant and maintain gardens at their own expense. These streets usually have a name beginning with Sadovaya.., e.g. Sadovo-Triumphalnaya Street. By 1850, all buildings in this street were completely hidden from view by foliage; the street, indeed, was running through a garden. In south-eastern segment (Tagansky District), the Ring was not as wide, thus Zemlyanoy Val name persisted. Largest square - actually, a combination of two market squares - was created at Red Gates in the north-eastern segment.

In 1830s-1862, Novinsky Boulevard has become a popular amusement park with cheap theaters and carousels. In 1841, local entrepreneurs set up a short railroad with a real Mercury tank engine - a pleasure ride for the party crowds.

Rails for horsecar
Horsecar
A horsecar or horse-drawn tram is an animal-powered streetcar or tram.These early forms of public transport developed out of industrial haulage routes that had long been in existence, and from the omnibus routes that first ran on public streets in the 1820s, using the newly improved iron or steel...
s (called konka (конка) in Russian) were installed in Moscow since 1872, however, the first lines were built on radial streets; rail construction on Garden Ring peaked in 1891. Likewise, the first electrical tram
Tram
A tram is a passenger rail vehicle which runs on tracks along public urban streets and also sometimes on separate rights of way. It may also run between cities and/or towns , and/or partially grade separated even in the cities...
was launched in 1899, but Garden Ring was electrified in 1907-1910. Circular line traversing the Ring was known as the "B" route (or a "bug" (букашка) in popular language). Gradually, new rental housing of 4-5-6 storey buildings replaced old two-story blocks; Moscow's tallest "skyscraper", an 8-story Art Nouveau
Art Nouveau
Art Nouveau is an international philosophy and style of art, architecture and applied art—especially the decorative arts—that were most popular during 1890–1910. The name "Art Nouveau" is French for "new art"...
Afremov Building, was inaugurated in Sadovaya-Spasskaya Street in 1904.

1935 Joseph Stalin
Joseph Stalin
Joseph Vissarionovich Stalin was the Premier of the Soviet Union from 6 May 1941 to 5 March 1953. He was among the Bolshevik revolutionaries who brought about the October Revolution and had held the position of first General Secretary of the Communist Party of the Soviet Union's Central Committee...
's master plan of Moscow provided for expansion of Garden Ring to at least 30-40 meter width, and demolition of buildings set at the ends of Garden Ring boulevards to create wide open squares. Grand stalinist buildings, envisioned on all the ring, where initially planned only for major squares like Kursky Rail Terminal
Kursky Rail Terminal
Kursky Rail Terminal is one of the nine rail terminals in Moscow. It was built in 1896.There are currently plans in the pipeline to completely rebuild or refurbish the Kursky Rail Terminal.-Long distance from Moscow:-Long distance via Moscow:...
Square and Triumphalnaya Square. However, one end-of-boulevard block survives, precisely on Triumphalnaya Square, atop the six-lane tunnel. The same plan required removal of tram tracks in line with Moscow Metro
Moscow Metro
The Moscow Metro is a rapid transit system serving Moscow and the neighbouring town of Krasnogorsk. Opened in 1935 with one line and 13 stations, it was the first underground railway system in the Soviet Union. As of 2011, the Moscow Metro has 182 stations and its route length is . The system is...
construction. In fact, removal of tram tracks proceeded well in advance of subway construction; by 1938, tram remained only in southern and south-eastern segments of the Ring (this segment was closed in 1961 ).

Air raids in 1941 destroyed the historical Gagarin
Gagarin family
thumb|right|250px|The Gagarin Coat of ArmsGagarin is a Rurikid princely family descending from sovereign rulers of Starodub-on-the-Klyazma.-Origins:...
mansion in Novinsky boulevard, Zatsepa market and many lesser buildings. In 1944, the ring saw a march of thousands of German prisoners, captured during Operation Bagration.