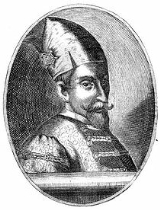 Feodor was a simple minded man who took little interest in politics
Politics
Politics is a process by which groups of people make collective decisions. The term is generally applied to the art or science of running governmental or state affairs, including behavior within civil governments, but also applies to institutions, fields, and special interest groups such as the...
, and was never considered a candidate for the Russian throne until the death of his elder brother Ivan Ivanovich. He was of pious character and spent most of his time in prayers.

Unlike his father, Feodor had no enthusiasm in maintaining exclusive trading rights with the Kingdom of England
Kingdom of England
The Kingdom of England was, from 927 to 1707, a sovereign state to the northwest of continental Europe. At its height, the Kingdom of England spanned the southern two-thirds of the island of Great Britain and several smaller outlying islands; what today comprises the legal jurisdiction of England...
. Feodor declared his kingdom open to all foreigners, and dismissed the English ambassador Sir Jerome Bowes, whose pomposity had been tolerated by Feodor's father. Elizabeth I
Elizabeth I of England
Elizabeth I was queen regnant of England and Ireland from 17 November 1558 until her death. Sometimes called The Virgin Queen, Gloriana, or Good Queen Bess, Elizabeth was the fifth and last monarch of the Tudor dynasty...
sent a new ambassador, Giles Fletcher, the Elder
Giles Fletcher, the Elder
Giles Fletcher, the Elder was an English poet and diplomat, member of the English Parliament.Giles Fletcher was the son of Richard Fletcher, vicar of Bishop's Stortford. He spent his early life at Cranbrook before entering Eton College about 1561...
, to demand Boris Godunov to convince the tsar to reconsider. The negotiations failed, due to Fletcher addressing Feodor with two of his titles omitted. Elizabeth continued to appeal to Feodor in half appealing, half reproachful letters. She proposed an alliance, something which she had refused to do when offered one by Feodor's father, but was turned down.

He married in 1580 Irina (Alexandra) Feodorovna Godunova (1557 – 26 October/23 November 1603). In 1588 he added on to Saint Basil's Cathedral
Saint Basil's Cathedral
The Cathedral of the Protection of Most Holy Theotokos on the Moat , popularly known as Saint Basil's Cathedral , is a Russian Orthodox church erected on the Red Square in Moscow in 1555–61. Built on the order of Ivan the Terrible to commemorate the capture of Kazan and Astrakhan, it marks the...
in the Red Square
Red Square
Red Square is a city square in Moscow, Russia. The square separates the Kremlin, the former royal citadel and currently the official residence of the President of Russia, from a historic merchant quarter known as Kitai-gorod...
, originally constructed between 1555-1561 by his father. Feodor built more towers on the eastern side of the cathedral over the grave of St. Basil the blessed.

Having inherited a land devastated by the excesses of his father, he left the task of governing the country to his wife's able brother, Boris Godunov
Boris Godunov
Boris Fyodorovich Godunov was de facto regent of Russia from c. 1585 to 1598 and then the first non-Rurikid tsar from 1598 to 1605. The end of his reign saw Russia descend into the Time of Troubles.-Early years:...
. Feodor I's weakness and inability to rule effectively have been sometimes attributed to mental retardation
Mental retardation
Mental retardation is a generalized disorder appearing before adulthood, characterized by significantly impaired cognitive functioning and deficits in two or more adaptive behaviors...
.

After almost twelve years of marriage, Tsaritsa Irina gave birth to a daughter, Feodosia, in 1592. Feodosia died in 1594 aged two. Feodor's failure to sire other children brought an end to the centuries-old central branch of the Rurik dynasty
Rurik Dynasty
The Rurik dynasty or Rurikids was a dynasty founded by the Varangian prince Rurik, who established himself in Novgorod around the year 862 AD...
(although many princes of later times are descendants of Rurik as well). Feodor was succeeded as tsar by Godunov, who had for many years ruled in Feodor's name. Termination of the dynasty can also be considered to be one of the reasons of the Time of Troubles
Time of Troubles
The Time of Troubles was a period of Russian history comprising the years of interregnum between the death of the last Russian Tsar of the Rurik Dynasty, Feodor Ivanovich, in 1598, and the establishment of the Romanov Dynasty in 1613. In 1601-1603, Russia suffered a famine that killed one-third...
. He died in Moscow
Moscow
Moscow is the capital, the most populous city, and the most populous federal subject of Russia. The city is a major political, economic, cultural, scientific, religious, financial, educational, and transportation centre of Russia and the continent...
and was buried at Archangel Cathedral, Kremlin
Moscow Kremlin
The Moscow Kremlin , sometimes referred to as simply The Kremlin, is a historic fortified complex at the heart of Moscow, overlooking the Moskva River , Saint Basil's Cathedral and Red Square and the Alexander Garden...
.

His troubled reign was dramatised by Aleksey Konstantinovich Tolstoy
Aleksey Konstantinovich Tolstoy
Count Aleksey Konstantinovich Tolstoy, often referred to as A. K. Tolstoy , was a Russian poet, novelist and playwright, considered to be the most important nineteenth-century Russian historical dramatist...
in his verse
Blank verse
Blank verse is poetry written in unrhymed iambic pentameter. It has been described as "probably the most common and influential form that English poetry has taken since the sixteenth century" and Paul Fussell has claimed that "about three-quarters of all English poetry is in blank verse."The first...
drama
Drama
Drama is the specific mode of fiction represented in performance. The term comes from a Greek word meaning "action" , which is derived from "to do","to act" . The enactment of drama in theatre, performed by actors on a stage before an audience, presupposes collaborative modes of production and a...
Tsar Fiodor Ioannovich
Tsar Fiodor Ioannovich
Tsar Fiodor Ioannovich is a 1868 historical drama by Aleksey Konstantinovich Tolstoy. It is the second part of a trilogy that begins with The Death of Ivan the Terrible and concludes with Tsar Boris. All three plays were banned by the censor...
(1868).
The source of this article is wikipedia, the free encyclopedia.  The text of this article is licensed under the GFDL.