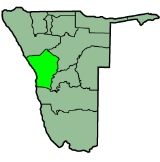 Encyclopedia
Erongo is one of the 13 regions of Namibia
Regions of Namibia
The administrative division of Namibia is tabled by Delimitation Commissions and accepted or declined by the National Assembly. The First Delimitation Commission chaired by Judge President Johan Strydom suggested in 1992 that Namibia be divided into 13 Regions, a number that has not been amended...
. It comprises the Swakopmund
Swakopmund
Swakopmund is a city on the coast of northwestern Namibia, west of Windhoek, Namibia's capital. It is the capital of the Erongo administrative district. As a seaside resort, the weather is cooler here in December to January so the territorial administration moves to Swakopmund for these months...
magisterial district up to the Ugab River
Ugab River
The Ugab River is an ephemeral river that only flows above the surface of its sandy bed a few days each year, but even during much of the dry season its subterranean water surfaces as pools in places, and provides an important resource for species in the Damaraland region of northern Namibia...
and includes Walvis Bay
Walvis Bay
Walvis Bay , is a city in Namibia and the name of the bay on which it lies...
, Omaruru and Karibib magisterial districts. This region is named after Erongo mountain, a well known landmark in Namibia and in this area. All the main centres within this region are connected by paved roads.

In the west, Erongo has a shoreline on the Atlantic Ocean
Atlantic Ocean
The Atlantic Ocean is the second-largest of the world's oceanic divisions. With a total area of about , it covers approximately 20% of the Earth's surface and about 26% of its water surface area...
. On land, it borders the following regions:

The Omaruru, Karibib, and Okombahe/Uis/Tsubeses areas are all situated in a semi-arid farming region and have a homogenous farming pattern, which is mostly stock-raising. It also combines communal farming with commercial farming. The needs for production and marketing are therefore very similar and the farming community has a distinct mutual interest which distinguishes their area from the Okahandja
Okahandja
Okahandja is a town of 14,000 inhabitants in Otjozondjupa Region, central Namibia, and the district capital of the Okahandja electoral constituency. It is known as the Garden Town of Namibia. It is located 70km north of Windhoek on the B1 road...
or the Otjiwarongo
Otjiwarongo
Otjiwarongo is a city of 20,000 inhabitants in the Otjozondjupa Region of Namibia. It is the district capital of the Otjiwarongo electoral constituency and also the capital of Otjozondjupa....
areas whose needs are more centred around industrial farming.

Various mining
Mining
Mining is the extraction of valuable minerals or other geological materials from the earth, from an ore body, vein or seam. The term also includes the removal of soil. Materials recovered by mining include base metals, precious metals, iron, uranium, coal, diamonds, limestone, oil shale, rock...
operations occur within this region at places such as Navachab
Navachab Gold Mine
The Navachab Gold Mine is an open-pit gold mine situated near Karibib, in the Erongo Region of Namibia. The operation is owned by AngloGold Ashanti....
and on a smaller scale at places surrounding Uis and the desert area. Karibib also has a marble industry. Walvis Bay, fully incorporated into the Erongo Region in 1994, is the principal home of Namibia's fishing industry. Swakopmund and Langstrand
Langstrand
Langstrand is a small beach resort on the Atlantic coast in western Namibia...
are popular beach resorts; Arandis supports mining industry and Swakopmund boasts manufacturing.

This region, with its link to the coast of Namibia, is well developed. Facilities such as schools, hospitals and clinics, the supply of electricity and telecommunication services are, with a few exceptions, well established.

The most commonly spoken languages at home were Oshiwambo (37% of households), Afrikaans
Afrikaans
Afrikaans is a West Germanic language, spoken natively in South Africa and Namibia. It is a daughter language of Dutch, originating in its 17th century dialects, collectively referred to as Cape Dutch .Afrikaans is a daughter language of Dutch; see , , , , , .Afrikaans was historically called Cape...
(22%), and Damara/Nama (21%). For those 15 years and older, the literacy rate was 92%. In terms of education, 89% of girls and 86% of boys between the ages of 6-15 were attending school, and of those older than 15, 79% had left school, 9% were currently at school, and 8% had never attended.

Among households, 96% had safe water, 12% no toilet facility, 73% electricity for lighting, 89% access to radio
Radio
Radio is the transmission of signals through free space by modulation of electromagnetic waves with frequencies below those of visible light. Electromagnetic radiation travels by means of oscillating electromagnetic fields that pass through the air and the vacuum of space...
, and 20% had wood or charcoal for cooking. In terms of household's main sources of income, 4% derived it from farming, 67% from wages and salaries, 8% cash remittances, 8% from business or non-farming, and 10% from pension.

For every 1000 live births there were 43 female infant deaths and 54 male. The life expectancy at birth was 59 years for females and 54 for males. Among children younger than 15, 3% had lost a mother, 5% a father, and 1% were orphaned by both parents. 4% of the entire population had a disability, of which 21% were deaf, 41% blind, 10% had a speech disability, 10% hand disability, 22% leg disability, and 4% mental disability.
The source of this article is wikipedia, the free encyclopedia.  The text of this article is licensed under the GFDL.