Encyclopedia
Okahandja is a town of 14,000 inhabitants in Otjozondjupa Region
Otjozondjupa
Otjozondjupa region is one of the thirteen regions of Namibia. An outstanding landmark within this region is the Waterberg Plateau Park. Administration offices are based in Otjiwarongo which is the largest town in the region....
, central Namibia
Namibia
Namibia, officially the Republic of Namibia , is a country in southern Africa whose western border is the Atlantic Ocean. It shares land borders with Angola and Zambia to the north, Botswana to the east and South Africa to the south and east. It gained independence from South Africa on 21 March...
, and the district capital of the Okahandja electoral constituency
Okahandja Constituency
Okahandja Constituency is an electoral constituency in the Otjozondjupa Region of Namibia. It has 18,155 inhabitants and consists of the town of Okahandja and the surrounding rural area....
. It is known as the Garden Town of Namibia. It is located 70km north of Windhoek
Windhoek
Windhoek is the capital and largest city of the Republic of Namibia. It is located in central Namibia in the Khomas Highland plateau area, at around above sea level. The 2001 census determined Windhoek's population was 233,529...
on the B1 road
B1 road (Namibia)
The B1 is one of the most important roads in Namibia, passing through the centre of the country in a north-south direction. It connects Noordoewer on the South African border with Oshikango in the north on the Angolan border...
. It was founded around 1800, by two local groups, the Herero and the Nama
Namaqua
Nama are an African ethnic group of South Africa, Namibia and Botswana. They traditionally speak the Nama language of the Khoe-Kwadi language family, although many Nama now speak Afrikaans. The Nama are the largest group of the Khoikhoi people, most of whom have largely disappeared as a group,...
.

Okahandja means the place where two rivers flow into each other to form one wide one in Otjiherero.

A German
Germany
Germany , officially the Federal Republic of Germany , is a federal parliamentary republic in Europe. The country consists of 16 states while the capital and largest city is Berlin. Germany covers an area of 357,021 km2 and has a largely temperate seasonal climate...
pastor, Heinrich Schmelen
Heinrich Schmelen
Reverend Johann Heinrich Schmelen was a German missionary and linguist who worked in South Africa and South-West Africa. Traveling through the area of today's northern South Africa and central and southern Namibia he founded the mission stations at Bethanie and Steinkopf and discovered the natural...
, became the first European
European ethnic groups
The ethnic groups in Europe are the various ethnic groups that reside in the nations of Europe. European ethnology is the field of anthropology focusing on Europe....
to visit the town in 1827. In 1844, two missionaries were permanently assigned to the town, and a church dates from this period. A military post was established in Okahandja in 1894, and it is this date that is officially recognized as the town's founding.

Maharero
Maharero
Maharero was one of the most powerful paramount chiefs of the Herero people in South-West Africa, today's Namibia.-Biography:...
and his sons, Jan Jonker Afrikaner
Jan Jonker Afrikaner
Jan Jonker Afrikaner was the second oldest son of Jonker Afrikaner and Beetje Boois...
, Hosea Kutako
Hosea Kutako
Chief Hosea Kutako was an early Namibian nationalist leader and member of the South West African People's Organization. Kutako, alongside Rev. Michael Scott led petitions to the United Nations which eventually led to the recognition of Namibia's status as a sovereign country under colonial control...
and Clemens Kapuuo
Clemens Kapuuo
Clemens Kapuuo was a Namibian school teacher, shopkeeper and chief of the Herero people of Namibia. Kapuuo was one of the leading opponents of South African rule of his country up until his assassination following the Turnhalle Constitutional Conference in March 1978.-Biography:Clemens Kapuuo was...
are buried in the town.

The National Institute for Educational Development (NIED) is today situated in Okahandja. NIED was created after independence as the institute from where a new national system of education was created, replacing the previous racist system of apartheid.

Von Bach Dam
Von Bach Dam
The Von Bach Dam and accompanying Recreational Resort is a dam and vacation resort in Okahandja, Otjozondjupa Region, Namibia. Built in 1968 and commissioned in 1970, the dam provides Namibia's capital of Windhoek with much of the city's water....
is situated outside of Okahandja. It provides most the water for Windhoek
Windhoek
Windhoek is the capital and largest city of the Republic of Namibia. It is located in central Namibia in the Khomas Highland plateau area, at around above sea level. The 2001 census determined Windhoek's population was 233,529...
.

An open-air curio market attracts tourists, and the town serves as the administrative centre for the Herero people. 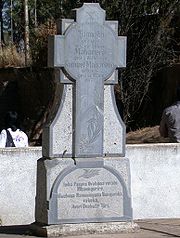 A station on the Trans-Namib Railway was built in 1909, which led to further growth and development in the area.

In the 1870s Rhenish missionaries
Rhenish Missionary Society
The Rhenish Missionary Society was one of the largest missionary societies in Germany. Formed from smaller missions founded as far back as 1799, the Society was amalgamated on 23 September 1828, and its first missionaries were ordained and sent off to South Africa by the end of the year.The...
established the first school. The Augustineum School was reopened at Okahandja on 9 November 1905; it was later moved to Windhoek
Windhoek
Windhoek is the capital and largest city of the Republic of Namibia. It is located in central Namibia in the Khomas Highland plateau area, at around above sea level. The 2001 census determined Windhoek's population was 233,529...
.
Okahandja has six primary schools and two high schools. Namwater Vocational, situated outside the main town, is the only institute of higher education in Okahandja.