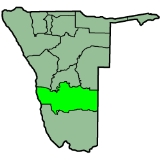 Encyclopedia
Hardap is one of the thirteen regions of Namibia
Regions of Namibia
The administrative division of Namibia is tabled by Delimitation Commissions and accepted or declined by the National Assembly. The First Delimitation Commission chaired by Judge President Johan Strydom suggested in 1992 that Namibia be divided into 13 Regions, a number that has not been amended...
. It is home to the Hardap Dam
Hardap Dam
Hardap Dam is a dam close to Mariental, Hardap Region, Namibia. Created in 1962 while Namibia was under South African occupation, Hardap Dam is the largest Dam in the country. The reservoir dams the Fish River and has a surface area of 25 km²...
.

Hardap stretches the entire width of Namibia, from the Atlantic Ocean
Atlantic Ocean
The Atlantic Ocean is the second-largest of the world's oceanic divisions. With a total area of about , it covers approximately 20% of the Earth's surface and about 26% of its water surface area...
in the west to Namibia's eastern national border. In the northeast, it borders the Kgalagadi District of Botswana
Botswana
Botswana, officially the Republic of Botswana , is a landlocked country located in Southern Africa. The citizens are referred to as "Batswana" . Formerly the British protectorate of Bechuanaland, Botswana adopted its new name after becoming independent within the Commonwealth on 30 September 1966...
, and in the southeast, it borders the Northern Cape
Northern Cape
The Northern Cape is the largest and most sparsely populated province of South Africa. It was created in 1994 when the Cape Province was split up. Its capital is Kimberley. It includes the Kalahari Gemsbok National Park, part of an international park shared with Botswana...
Province of South Africa
South Africa
The Republic of South Africa is a country in southern Africa. Located at the southern tip of Africa, it is divided into nine provinces, with of coastline on the Atlantic and Indian oceans...
. Domestically, it borders the following regions:

The most commonly spoken languages at home were Afrikaans
Afrikaans
Afrikaans is a West Germanic language, spoken natively in South Africa and Namibia. It is a daughter language of Dutch, originating in its 17th century dialects, collectively referred to as Cape Dutch .Afrikaans is a daughter language of Dutch; see , , , , , .Afrikaans was historically called Cape...
(44% of households), and Nama
Nama language
The Khoekhoe language, or Khoekhoegowab, also known by the ethnic term Nàmá and previously the now-discouraged term Hottentot, is the most widespread of the Khoisan languages. It belongs to the Khoe language family, and is spoken in Namibia, Botswana, and South Africa by three ethnic groups, the...
/Damara (44%). For those 15 years and older, the literacy rate was 83%. In terms of education, 84% of girls and 83% of boys between the ages of 6-15 were attending school, and of those older than 15, 73% had left school, 9% were currently at school, and 13% had never attended.

Among households, 95% had safe water, 34% no toilet facility, 51% electricity for lighting, 77% access to radio
Radio
Radio is the transmission of signals through free space by modulation of electromagnetic waves with frequencies below those of visible light. Electromagnetic radiation travels by means of oscillating electromagnetic fields that pass through the air and the vacuum of space...
, and 20% had wood or charcoal for cooking. In terms of household's main sources of income, 9% derived it from farming, 61% from wages and salaries, 7% cash remittances, 5% from business or non-farming, and 15% from pension.

For every 1000 live births there were 62 female infant deaths and 64 male. The life expectancy at birth was 53 years for females and 51 for males. Among children younger than 15, 4% had lost a mother, 6% a father, and 1% were orphaned by both parents. 6% of the entire population had a disability, of which 19% were deaf, 47% blind, 7% had a speech disability, 10% hand disability, 28% leg disability, and 6% mental disability.
The source of this article is wikipedia, the free encyclopedia.  The text of this article is licensed under the GFDL.