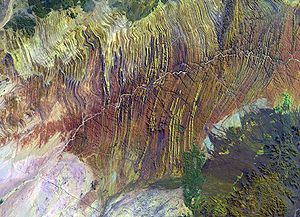 The Ugab River is an ephemeral river that only flows above the surface of its sand
Sand
Sand is a naturally occurring granular material composed of finely divided rock and mineral particles.The composition of sand is highly variable, depending on the local rock sources and conditions, but the most common constituent of sand in inland continental settings and non-tropical coastal...
y bed a few days each year, but even during much of the dry season its subterranean water
Water
Water is a chemical substance with the chemical formula H2O. A water molecule contains one oxygen and two hydrogen atoms connected by covalent bonds. Water is a liquid at ambient conditions, but it often co-exists on Earth with its solid state, ice, and gaseous state . Water also exists in a...
surfaces as pools in places, and provides an important resource for species in the Damaraland
Damaraland
Damaraland was a name given to the north-central part of what later became Namibia, inhabited by the Damaras. It was bounded roughly by Ovamboland in the north, the Namib Desert in the west, the Kalahari Desert in the east, and Windhoek in the south....
region of northern Namibia
Namibia
Namibia, officially the Republic of Namibia , is a country in southern Africa whose western border is the Atlantic Ocean. It shares land borders with Angola and Zambia to the north, Botswana to the east and South Africa to the south and east. It gained independence from South Africa on 21 March...
. The Ugab's mean run-off is roughly 20 million cubic metres per annum.
The Ugab River's large subterranean water content makes it a major Namibian River. Stretching for almost 500 km, the river provides water for species such as the rare desert elephant
Elephant
Elephants are large land mammals in two extant genera of the family Elephantidae: Elephas and Loxodonta, with the third genus Mammuthus extinct...
as well as giraffe
Giraffe
The giraffe is an African even-toed ungulate mammal, the tallest of all extant land-living animal species, and the largest ruminant...
, mountain zebra
Zebra
Zebras are several species of African equids united by their distinctive black and white stripes. Their stripes come in different patterns unique to each individual. They are generally social animals that live in small harems to large herds...
and the largest population of free roaming black rhinoceros
Black Rhinoceros
The Black Rhinoceros or Hook-lipped Rhinoceros , is a species of rhinoceros, native to the eastern and central areas of Africa including Kenya, Tanzania, Cameroon, South Africa, Namibia, Zimbabwe, and Angola...
es in the world. The Ugab Wilderness Area was established here to protect the future of these rare animals.

People can trek the length of the sandy river, passing local Herero farmers and the pink granite 'inselbergs' (islands of rock left behind after volcanic activity) dotted throughout the region. These bizarre stones have been shaped over the years into vaguely recognisable shapes, some look like toadstools, while others are eerie hollow structures known as the 'Petrified Ghosts'.

Quite a few plants grow there; much of the visible vegetation is the exotic wild tobacco, Nicotiana glauca
Nicotiana glauca
Nicotiana glauca is a species of wild tobacco known by the common names tree tobacco and incorrectly also Mustard tree. Its leaves are attached to the stalk by petioles , and its leaves and stems are neither pubescent nor sticky like Nicotiana tabacum...
. Also found there indigenously are some stunted acacia
Acacia
Acacia is a genus of shrubs and trees belonging to the subfamily Mimosoideae of the family Fabaceae, first described in Africa by the Swedish botanist Carl Linnaeus in 1773. Many non-Australian species tend to be thorny, whereas the majority of Australian acacias are not...
trees, nara bushes, Acanthosicyos horridus
Acanthosicyos horridus
Acanthosicyos horridus is an unusual melon that occurs only in Namibia; it is locally called !nara.The edible seeds are known locally as butterpips....
, with their (almost leafless) spiky green stems, and improbably large melons.
The source of this article is wikipedia, the free encyclopedia.  The text of this article is licensed under the GFDL.