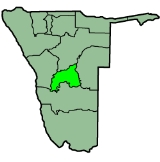 Encyclopedia
Khomas is one of the thirteen regions
Regions of Namibia
The administrative division of Namibia is tabled by Delimitation Commissions and accepted or declined by the National Assembly. The First Delimitation Commission chaired by Judge President Johan Strydom suggested in 1992 that Namibia be divided into 13 Regions, a number that has not been amended...
of Namibia
Namibia
Namibia, officially the Republic of Namibia , is a country in southern Africa whose western border is the Atlantic Ocean. It shares land borders with Angola and Zambia to the north, Botswana to the east and South Africa to the south and east. It gained independence from South Africa on 21 March...
. It contains the capital city Windhoek
Windhoek
Windhoek is the capital and largest city of the Republic of Namibia. It is located in central Namibia in the Khomas Highland plateau area, at around above sea level. The 2001 census determined Windhoek's population was 233,529...
and provides for this reason superior transportation infrastructure. It has well-developed economical, financial, and trade sectors. Khomas Region occupies 4.5% of the land area of Namibia but has the highest population of any of its regions (15%). Whites and coloureds are about 46.7% of population.

Khomas is one of only three regions to have neither shoreline nor a foreign border. It borders the following regions:

The region comprises nine constituencies
Constituencies of Namibia
Each of the 13 regions in Namibia are further subdivided into electoral constituencies. The number and size of each constituency varies with the size and population of each region. There are currently 107 constituencies in Namibia...
:
Khomas is important electorally, as nearly 17% of the total votes in the 2004 election came from this region.

SWAPO won Khomas Region by a wide majority, though with a lower percentage of the total vote than nationally.

The most commonly spoken languages at home were Oshiwambo (37% of households), Afrikaans
Afrikaans
Afrikaans is a West Germanic language, spoken natively in South Africa and Namibia. It is a daughter language of Dutch, originating in its 17th century dialects, collectively referred to as Cape Dutch .Afrikaans is a daughter language of Dutch; see , , , , , .Afrikaans was historically called Cape...
(24%), and Nama
Nama language
The Khoekhoe language, or Khoekhoegowab, also known by the ethnic term Nàmá and previously the now-discouraged term Hottentot, is the most widespread of the Khoisan languages. It belongs to the Khoe language family, and is spoken in Namibia, Botswana, and South Africa by three ethnic groups, the...
/Damara (13%). For those 15 years and older, the literacy rate was 94%. In terms of education, 87% of girls and 86% of boys between the ages of 6-15 were attending school, and of those 15 years and older, 76% had left school, 12% were currently at school, and 8% had never attended.

Among households, 98% had safe water, 20% no toilet facility, 69% electricity for lighting, 83% access to radio
Radio
Radio is the transmission of signals through free space by modulation of electromagnetic waves with frequencies below those of visible light. Electromagnetic radiation travels by means of oscillating electromagnetic fields that pass through the air and the vacuum of space...
, and 9% had wood or charcoal for cooking. In terms of households' main sources of income, 1% derived it from farming, 74% from wages and salaries, 7% cash remittances, 11% from business or non-farming, and 4% from pension.

For every 1000 live births there were 53 female infant deaths and 54 male. The life expectancy at birth was 56 years for females and 54 for males. Among children younger than 15, 5% had lost a mother, 10% a father, and 1% were orphaned by both parents. 4% of the entire population had a disability, of which 22% were deaf, 44% blind, 11% had a speech disability, 9% hand disability, 15% leg disability, and 4% mental disability.
The source of this article is wikipedia, the free encyclopedia.  The text of this article is licensed under the GFDL.