Walvis Bay is a city in Namibia
Namibia
Namibia, officially the Republic of Namibia , is a country in southern Africa whose western border is the Atlantic Ocean. It shares land borders with Angola and Zambia to the north, Botswana to the east and South Africa to the south and east. It gained independence from South Africa on 21 March...
and the name of the bay
Bay
A bay is an area of water mostly surrounded by land. Bays generally have calmer waters than the surrounding sea, due to the surrounding land blocking some waves and often reducing winds. Bays also exist as an inlet in a lake or pond. A large bay may be called a gulf, a sea, a sound, or a bight...
on which it lies. The town has 85,000 inhabitants and owns 29 square kilometres (11.2 sq mi) of land.

The bay has been a haven for sea vessels because of its natural deepwater harbour, protected by the Pelican Point sand spit, being the only natural harbour of any size along the country's coast. Being rich in plankton
Plankton
Plankton are any drifting organisms that inhabit the pelagic zone of oceans, seas, or bodies of fresh water. That is, plankton are defined by their ecological niche rather than phylogenetic or taxonomic classification...
and marine life, these waters also drew large numbers of whale
Whale
Whale is the common name for various marine mammals of the order Cetacea. The term whale sometimes refers to all cetaceans, but more often it excludes dolphins and porpoises, which belong to suborder Odontoceti . This suborder also includes the sperm whale, killer whale, pilot whale, and beluga...
s attracting whalers and fishing vessels. The Dutch referred to it as Walvisch Baye and the English as Whale Bay. In its eventual proclamation it came to be called Walfish Bay, then Walvish Bay, and ultimately Walvis Bay. It has also been referred to as Walwich Bay or Walwisch Bay.

The town is situated just north of the Tropic of Capricorn
Tropic of Capricorn
The Tropic of Capricorn, or Southern tropic, marks the most southerly latitude on the Earth at which the Sun can be directly overhead. This event occurs at the December solstice, when the southern hemisphere is tilted towards the Sun to its maximum extent.Tropic of Capricorn is one of the five...
in the Kuiseb River delta and lies at the end of the TransNamib Railway
TransNamib
TransNamib is the railway parastatal of Namibia. Organised as a holding company, it provides freight by rail and road as well as passenger services. Its administration is located in Windhoek.-History:...
to Windhoek
Windhoek
Windhoek is the capital and largest city of the Republic of Namibia. It is located in central Namibia in the Khomas Highland plateau area, at around above sea level. The 2001 census determined Windhoek's population was 233,529...
, and on the B2 road
B2 road (Namibia)
The B2 is a major road in Namibia. The highway runs east-west between the major sea port of Walvis Bay and the nation's capital Windhoek....
.

Walvis Bay, with its large bay and sand dunes, is the tourism activity centre of Namibia. Other attractions include the artificial Bird Island
Bird Island (Namibia)
Bird Island is a man-made platform off the coast of Namibia between Walvis Bay and Swakopmund. It serves as a breeding ground for birds and yields a large amount of guano which is collected and sold.- History :...
, centre of a guano
Guano
Guano is the excrement of seabirds, cave dwelling bats, and seals. Guano manure is an effective fertilizer due to its high levels of phosphorus and nitrogen and also its lack of odor. It was an important source of nitrates for gunpowder...
collection industry, the Dune 7 sand dune, salt works, birdlife and a museum
Museum
A museum is an institution that cares for a collection of artifacts and other objects of scientific, artistic, cultural, or historical importance and makes them available for public viewing through exhibits that may be permanent or temporary. Most large museums are located in major cities...
. Kuisebmund Stadium
Kuisebmund Stadium
Kuisebmund Stadium is an open air stadium in Walvis Bay, Namibia. It is home to several teams in the Namibia Premier League, including the Eleven Arrows and Blue Waters football clubs. The stadium has capacity for 4,000 spectators....
, home to two clubs in the Namibia Premier League
Namibia Premier League
The Namibia Premier League , also known as MTC Namibia Premier League due to sponsorship reasons, is the highest level of domestic association football in Namibia...
, is also located in the city and the beach resort of Langstrand
Langstrand
Langstrand is a small beach resort on the Atlantic coast in western Namibia...
lies just a few kilometers north. The Walvis Bay Export Processing Zone
Walvis Bay Export Processing Zone
The Walvis Bay Export Processing Zone is a free trade zone in the coastal city of Walvis Bay, Namibia. Rather than being a specific area or complex, the Zone encompasses the entire city. The Walvis Bay EPZ was opened in 1996, two years after the city rejoined Namibia....
is an important facet of the local economy. 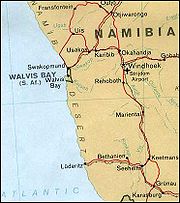 The Portuguese navigator Diogo Cão
Diogo Cão
Diogo Cão was a Portuguese explorer and one of the most remarkable navigators of the Age of Discovery, who made two voyages sailing along the west coast of Africa to Namibia in the 1480s.-Early life and family:...
reached Cape Cross
Cape Cross
Cape Cross is a cape in the South Atlantic on the coast of Namibia, on the C34 highway some 60 kilometres north of Hentiesbaai and 120 km north of Swakopmund on the west coast of Namibia....
, north of the bay, in 1485. There followed Bartolomeu Dias
Bartolomeu Dias
Bartolomeu Dias , a nobleman of the Portuguese royal household, was a Portuguese explorer who sailed around the southernmost tip of Africa in 1488, the first European known to have done so.-Purposes of the Dias expedition:...
, who anchored his flagship São Cristóvão in what is now Walvis Bay on 8 December 1487, on his expedition to discover a sea route to the East via the Cape of Good Hope
Cape of Good Hope
The Cape of Good Hope is a rocky headland on the Atlantic coast of the Cape Peninsula, South Africa.There is a misconception that the Cape of Good Hope is the southern tip of Africa, because it was once believed to be the dividing point between the Atlantic and Indian Oceans. In fact, the...
. He named the bay "O Golfo de Santa Maria da Conceição." However, the Portuguese did not formally stake a claim to Walvis Bay. 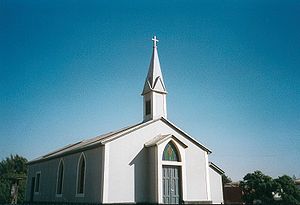 In 1971, anticipating an imminent ceding of its control over South-West Africa, South Africa transferred control of Walvis Bay back to its Cape Province, thus making it an exclave. In 1977, in an attempt to avoid losing control of Walvis Bay to a possibly hostile SWAPO
South-West Africa People's Organisation
The South West Africa People's Organization is a political party and former liberation movement in Namibia. It has been the governing party in Namibia since achieving independence in 1990...
-led government, the South African government reimposed direct rule and reasserted its claim of sovereignty based on the original annexation. In 1978, the United Nations Security Council
United Nations Security Council
The United Nations Security Council is one of the principal organs of the United Nations and is charged with the maintenance of international peace and security. Its powers, outlined in the United Nations Charter, include the establishment of peacekeeping operations, the establishment of...
provided for bilateral negotiations between South Africa and a future Namibia to resolve the political status of Walvis Bay.

In 1990 South-West Africa gained independence as Namibia
Namibia
Namibia, officially the Republic of Namibia , is a country in southern Africa whose western border is the Atlantic Ocean. It shares land borders with Angola and Zambia to the north, Botswana to the east and South Africa to the south and east. It gained independence from South Africa on 21 March...
, but Walvis Bay remained under South African sovereignty. At midnight on 28 February 1994 South Africa formally transferred sovereignty over Walvis Bay and the Penguin Islands to Namibia.

In Walvis Bay there are a number of public (government-run) and private schools. Examples of such schools are Duinesig primary school, De duine secondary school, International School of Walvis Bay, Kuisebmond secondary school, Walvis Bay Private High School and others. There are also a number of kindergartens to cater to young children. Tertiary institutions such as NAMFI (dedicated to the training of deck officers, fishermen, marine engineers and other careers in fishing and under-water work), Monitronic success college and IUM also exist.

Walvis Bay contains open spaces, scenic beauty and unique marine and plant life. It is well suited for the outdoor lifestyle, boasting sports such as sandboarding, kiting, surfing, swimming, angling, sailing, golf and other in- and outdoor sport codes.There is Walvis Bay Lagoon and Aquatic Activities, Kuiseb River Delta and the beach itself where by people enjoy swimming and catching fish.
The low peninsula gives the bay a unique combination of strong wind and shallow waves, ideal for record attempting vessels like Vestas Sailrocket

Walvis Bay has twinning agreements with Lobatse in Botswana
Botswana
Botswana, officially the Republic of Botswana , is a landlocked country located in Southern Africa. The citizens are referred to as "Batswana" . Formerly the British protectorate of Bechuanaland, Botswana adopted its new name after becoming independent within the Commonwealth on 30 September 1966...
and with Drakenstein
Drakenstein Local Municipality
Drakenstein Municipality is a local municipality located within the Cape Winelands District Municipality, in the Western Cape province of South Africa. As of 2007, it had a population of 217,089...
in South Africa
South Africa
The Republic of South Africa is a country in southern Africa. Located at the southern tip of Africa, it is divided into nine provinces, with of coastline on the Atlantic and Indian oceans...
since 2011.