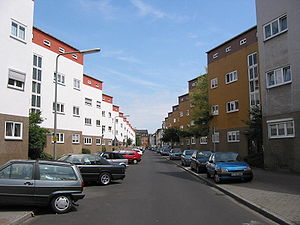 Ernst May was a German
Germany
Germany , officially the Federal Republic of Germany , is a federal parliamentary republic in Europe. The country consists of 16 states while the capital and largest city is Berlin. Germany covers an area of 357,021 km2 and has a largely temperate seasonal climate...
architect and city planner.

May successfully applied urban design
Urban design
Urban design concerns the arrangement, appearance and functionality of towns and cities, and in particular the shaping and uses of urban public space. It has traditionally been regarded as a disciplinary subset of urban planning, landscape architecture, or architecture and in more recent times has...
techniques to the city of Frankfurt am Main during Germany's Weimar
Weimar Republic
The Weimar Republic is the name given by historians to the parliamentary republic established in 1919 in Germany to replace the imperial form of government...
period, and in 1930 less successfully exported those ideas to Soviet Union
Soviet Union
The Soviet Union , officially the Union of Soviet Socialist Republics , was a constitutionally socialist state that existed in Eurasia between 1922 and 1991....
cities, newly created under Stalinist
Stalinism
Stalinism refers to the ideology that Joseph Stalin conceived and implemented in the Soviet Union, and is generally considered a branch of Marxist–Leninist ideology but considered by some historians to be a significant deviation from this philosophy...
rule. It is said May's "brigade" of German architects and planners established twenty cities in three years, including Magnitogorsk
Magnitogorsk
Magnitogorsk is a mining and industrial city in Chelyabinsk Oblast, Russia, located on the eastern side of the extreme southern extent of the Ural Mountains by the Ural River. Population: 418,545 ;...
. May's travels left him a stateless person when the Nazis
Nazi Germany
Nazi Germany , also known as the Third Reich , but officially called German Reich from 1933 to 1943 and Greater German Reich from 26 June 1943 onward, is the name commonly used to refer to the state of Germany from 1933 to 1945, when it was a totalitarian dictatorship ruled by...
seized German rule, and he spent many years in Africa
Africa
Africa is the world's second largest and second most populous continent, after Asia. At about 30.2 million km² including adjacent islands, it covers 6% of the Earth's total surface area and 20.4% of the total land area...
n exile before returning to Germany near the end of his life.

May was born as the son of a leather goods manufacturer. His education from 1908 through 1912 included time in the United Kingdom
United Kingdom
The United Kingdom of Great Britain and Northern IrelandIn the United Kingdom and Dependencies, other languages have been officially recognised as legitimate autochthonous languages under the European Charter for Regional or Minority Languages...
, studying under Raymond Unwin
Raymond Unwin
Sir Raymond Unwin was a prominent and influential English engineer, architect and town planner, with an emphasis on improvements in working class housing.-Early years:...
, and absorbing the lessons and principles of the garden city movement
Garden city movement
The garden city movement is a method of urban planning that was initiated in 1898 by Sir Ebenezer Howard in the United Kingdom. Garden cities were intended to be planned, self-contained communities surrounded by "greenbelts" , containing proportionate areas of residences, industry and...
. He finished a study at the Technical University of Munich
Technical University of Munich
The Technische Universität München is a research university with campuses in Munich, Garching, and Weihenstephan...
, working with Friedrich von Thiersch and Theodor Fischer
Theodor Fischer
Theodor Fischer was a German architect and teacher.Fischer planned public housing projects for the city of Munich beginning in 1893. He was the joint founder and first chairman of the Deutscher Werkbund , as well as member of the German version of the Garden city movement...
, a co-founder of the Deutscher Werkbund
Deutscher Werkbund
The Deutscher Werkbund was a German association of artists, architects, designers, and industrialists. The Werkbund was to become an important event in the development of modern architecture and industrial design, particularly in the later creation of the Bauhaus school of design...
.

Working for himself and others through the 1910s, in 1921 he helped win a competition for rural housing estate developments in Breslau. His concepts of decentralized planning, some of which had been imported from the garden city movement, he won the job of city architect and planner for his home city from 1925 through 1930. Working under Mayor Ludwig Landmann
Ludwig Landmann
Dr. Ludwig Landmann was a liberal German politician of the Weimar Republic...
, the position gave him broad powers of zoning, financing, and hiring. There was copious funding and an available labor pool. He used them. 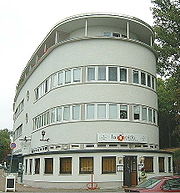 In the context of a housing shortage and a degree of political instability, May assembled a powerful staff of progressive architects and initiated a large-scale housing development program. May's developments were remarkable for the time for being compact, semi-independent, well-equipped with community elements like playgrounds, schools, theatres, and common washing areas. For the sake of economy and construction speed May used simplified, prefabricated forms. These settlements are still marked by their functionality and the way they manifest egalitarian ideals such as equal access to sunlight, air, and common areas. Of these settlements the best known is probably Römerstadt, and some of the structures are colloquially known as Zickzackhausen.

In 1926 May sent for Austria
Austria
Austria , officially the Republic of Austria , is a landlocked country of roughly 8.4 million people in Central Europe. It is bordered by the Czech Republic and Germany to the north, Slovakia and Hungary to the east, Slovenia and Italy to the south, and Switzerland and Liechtenstein to the...
n architect Margarete Schütte-Lihotzky
Margarete Schütte-Lihotzky
Margarete Schütte-Lihotzky was the first female Austrian architect and an activist in the Nazi resistance movement. She is mostly remembered today for designing the so-called Frankfurt Kitchen.-Training:...
to join him in Frankfurt. Lihotsky was a kindred spirit and applied the same sort of functional clarity to household problems, and so in Frankfurt, after much analysis of work habits and footsteps, she developed the prototype of the modern installed kitchen
Frankfurt kitchen
The Frankfurt kitchen was a milestone in domestic architecture, considered the fore-runner of modern fitted kitchens, for it realised for the first time a kitchen built after a unified concept, designed to enable efficient work and to be built at low cost...
, and pursued her idea that "housing is the organized implementation of living habits".

May's Frankfurt was a civic and critical success. This has been described (by John R. Mullin) as "one of the most remarkable city planning experiments in the twentieth century". In two years May produced more than 5,000 building units, up to 15,000 units in five years, published his own magazine (Zeitschrift Das Neue Frankfurt) and in 1929 won international attention at the Congrès International d'Architecture Moderne
Congrès International d'Architecture Moderne
The Congrès internationaux d'architecture moderne – CIAM was an organization founded in 1928 and disbanded in 1959, responsible for a series of events and congresses arranged around the world by the most prominent architects of the time, with the objective of spreading the principles of the Modern...
. This also brought him to the attention of the Soviet Union.


The 'May Brigade' in the USSR

In 1930 May took virtually his entire Frankfurt staff to Russia. May's Brigade amounted to a task force of 17 people, including Lihotsky, her husband Wilhelm Schuette, Arthur Korn
Arthur Korn (architect)
Arthur Korn was a German Jewish architect and urban planner who was a proponent of modernism in Germany and the UK.-Life and career:...
, the Hungarian-born Fred Forbat
Fred Forbát
Fred Forbát was a Hungarian-born architect with significant work in Germany and Sweden.Forbát was born of Jewish parents in Pécs...
, the Swiss
Switzerland
Switzerland name of one of the Swiss cantons. ; ; ; or ), in its full name the Swiss Confederation , is a federal republic consisting of 26 cantons, with Bern as the seat of the federal authorities. The country is situated in Western Europe,Or Central Europe depending on the definition....
Hans Schmidt
Hans Schmidt
Hans Schmidt is the name of:* Hans Schmidt , American Roman Catholic priest executed for committing murder* Hans Schmidt , stage name of Guy Larose, Canadian wrestler* Hans Schmidt , German bobsledder...
, the Austrian-born Erich Mauthner and the Dutch
Netherlands
The Netherlands is a constituent country of the Kingdom of the Netherlands, located mainly in North-West Europe and with several islands in the Caribbean. Mainland Netherlands borders the North Sea to the north and west, Belgium to the south, and Germany to the east, and shares maritime borders...
Mart Stam
Mart Stam
Mart Stam was a Dutch architect, urban planner, and furniture designer. Stam was extraordinarily well-connected, and his career intersects with important moments in the history of 20th century European architecture, including chair design at the Bauhaus, the Weissenhof Estate, the "Van Nelle...
. The promise of the "Socialist
Socialism
Socialism is an economic system characterized by social ownership of the means of production and cooperative management of the economy; or a political philosophy advocating such a system. "Social ownership" may refer to any one of, or a combination of, the following: cooperative enterprises,...
paradise" was still fresh, and May's Brigade and other groups of western planners had the hope of constructing entire cities. The first was to be Magnitogorsk. Although May's group is indeed credited with building 20 cities in three years, the reality was that May found Magnitogorsk already under construction and the town site dominated by the mine. Officials were indecisive, then distrustful, corruption and delay frustrated their efforts, and May himself made misjudgements about the climate. May's contract expired in 1933, and he left for British East Africa (Kenya
Kenya
Kenya , officially known as the Republic of Kenya, is a country in East Africa that lies on the equator, with the Indian Ocean to its south-east...
). Some of his architects found themselves unwanted by Russia, and stateless.

The 1995 documentary film Sotsgorod ("Socialist Cities") interviewed some of the last survivors of these groups: Lihotzky, Jan Rutgers, and Phillipp Tolziner of the Bauhaus Brigade, and visited four of the planned cities: Magnitogorsk, Orsk
Orsk
Orsk is the second largest city in Orenburg Oblast, Russia, located on the steppe about southeast of the southern tip of the Ural Mountains. The city straddles the Ural River. Since this river is considered a boundary between Europe and Asia, Orsk can be said to lie in two continents. It is...
, Novokuznetsk
Novokuznetsk
Novokuznetsk is a city in Kemerovo Oblast, Russia. It serves as the administrative center of Novokuznetsky District, but it is not administratively a part of it...
and Kemerovo
Kemerovo
Kemerovo is an industrial city in Russia, situated on the Tom River, east-northeast of Novosibirsk. It is the administrative center of Kemerovo Oblast, located in the major coal mining region of the Kuznetsk Basin...
.

May worked, farmed and completed some architectural work in Kenya, then returned to Germany after the end of World War II
World War II
World War II, or the Second World War , was a global conflict lasting from 1939 to 1945, involving most of the world's nations—including all of the great powers—eventually forming two opposing military alliances: the Allies and the Axis...
. From 1954 through 1956 he led the planning department in Hamburg, was involved in several large housing projects in other cities, and died in 1970.