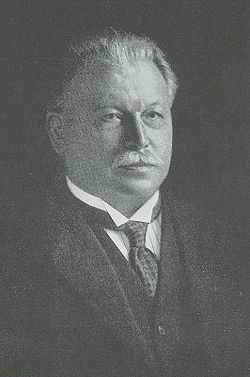 Dr. Ludwig Landmann was a liberal German politician of the Weimar Republic. Landmann belonged first to the National Social
National-Social Association
The National-Social Association was a political party in the German Empire, founded in 1896 by Friedrich Naumann.In the second half of the 19th century Germany underwent a rapid industrialization, which was connected with rising social problems...
party, then the Progressive People's Party
Progressive People's Party (Germany)
The Progressive People's Party was a liberal party of late Imperial Germany. It was formed in 6 March, 1910 as a merger of Freeminded People's Party, Freeminded Union, and German People's Party in order to unify the various liberal groups represented in parliament...
, and finally, after the German revolution
German Revolution
The German Revolution was the politically-driven civil conflict in Germany at the end of World War I, which resulted in the replacement of Germany's imperial government with a republic...
of 1918, the German Democratic Party.

He eventually moved from Mannheim to Frankfurt
Frankfurt
Frankfurt am Main , commonly known simply as Frankfurt, is the largest city in the German state of Hesse and the fifth-largest city in Germany, with a 2010 population of 688,249. The urban area had an estimated population of 2,300,000 in 2010...
, where he became Mayor of Frankfurt from 1924 until 1933 and led a significant expansion of the city. Through reorganizations and construction, Landmann gave the city new luster. Landmann was the first Jewish
Judaism
Judaism ) is the "religion, philosophy, and way of life" of the Jewish people...
mayor of Frankfurt. 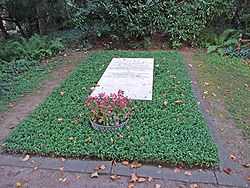 At the time he was mayor, Frankfurt led the nation with new housing projects, helping to soothe the housing shortage in the city, and founded the Nassau home, an organization that helped guarantee every citizen had access to decent housing.

After the Nazi election victory in the municipal elections on March 12, 1933, he was expelled from his office. He then handed in his official resignation as mayor. He was succeeded by Friedrich Krebs of the NSDAP.

Landmann left then for Berlin. But because of his Jewish faith, he was exposed to various Nazi anti-semitic harassments; among other things, his pension payments were temporarily stopped. In 1939, he left Germany and emigrated to the Netherlands
Netherlands
The Netherlands is a constituent country of the Kingdom of the Netherlands, located mainly in North-West Europe and with several islands in the Caribbean. Mainland Netherlands borders the North Sea to the north and west, Belgium to the south, and Germany to the east, and shares maritime borders...
, the home of his wife. After the German occupation of the Netherlands from 1940, he was hidden by relatives and friends to protect him from deportation, and possible death. He died in 1945 in hiding from malnutrition
Malnutrition
Malnutrition is the condition that results from taking an unbalanced diet in which certain nutrients are lacking, in excess , or in the wrong proportions....
during Holland's 'Hunger Winter'.

Today Ludwig Landmann Street in Frankfurt is dedicated to his memory. A portrait of the mayor by William Runze, a painter from the Sossenheim
Sossenheim (Frankfurt am Main)
Sossenheim is a district or Stadtteil of Frankfurt am Main, Germany. It is part of the Ortsbezirk West, and is subdivided into the Stadtbezirke Sossenheim-Ost and Sossenheim-West. It has been a district since 1928 and makes part of the northwest border of the city...
district of Frankfurt, hangs in the Council Hall at the Römer, Frankfurt's City Hall
Romer
A Reference Card or "Romer" is a device for increasing the accuracy when reading a grid reference from a map. Made from transparent plastic, paper or other materials, they are also found on most baseplate compasses. Essentially, it is a specially marked-out ruler which matches the scale of the map...
.
The source of this article is wikipedia, the free encyclopedia.  The text of this article is licensed under the GFDL.