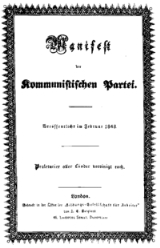 Overview
Socialism icon is an economic system
Economic system
An economic system is the combination of the various agencies, entities that provide the economic structure that defines the social community. These agencies are joined by lines of trade and exchange along which goods, money etc. are continuously flowing. An example of such a system for a closed...
characterized by social ownership of the means of production
Means of production
Means of production refers to physical, non-human inputs used in production—the factories, machines, and tools used to produce wealth — along with both infrastructural capital and natural capital. This includes the classical factors of production minus financial capital and minus human capital...
and cooperative management of the economy; or a political philosophy
Political philosophy
Political philosophy is the study of such topics as liberty, justice, property, rights, law, and the enforcement of a legal code by authority: what they are, why they are needed, what, if anything, makes a government legitimate, what rights and freedoms it should protect and why, what form it...
advocating such a system. "Social ownership" may refer to any one of, or a combination of, the following: cooperative
Cooperative
A cooperative is a business organization owned and operated by a group of individuals for their mutual benefit...
enterprises, common ownership
Common ownership
Common ownership is a principle according to which the assets of an enterprise or other organization are held indivisibly rather than in the names of the individual members or by a public institution such as a governmental body. It is therefore in contrast to public ownership...
, autonomous public ownership or state ownership. As a form of social organization, socialism is based on co-operative social relations and self-management
Workers' self-management
Worker self-management is a form of workplace decision-making in which the workers themselves agree on choices instead of an owner or traditional supervisor telling workers what to do, how to do it and where to do it...
; relatively equal power-relations and the reduction or elimination of hierarchy in the management of economic and political affairs.

Socialist economies are based upon production for use
Production for use
Production for use is a defining criterion of a socialist economy and distinguishes socialism from capitalism...
and the direct allocation of economic inputs to satisfy economic demands and human needs (use value
Use value
Use value or value in use is the utility of consuming a good; the want-satisfying power of a good or service in classical political economy. In Marx's critique of political economy, any labor-product has a value and a use-value, and if it is traded as a commodity in markets, it additionally has an...
); accounting is based on physical quantities
Calculation in kind
Calculation in kind is a type of accounting based on physical magnitudes and physical quantities rather than a common unit of accounting for economic calculation. Calculation in kind, or valueless calculation, is often described as the form of calculation that would supersede monetary calculation...
of resources, some physical magnitude, or a direct measure of labour-time
Time-based currency
In economics, a time-based currency is an alternative currency where the unit of exchange is the man-hour.Some time-based currencies value everyone’s contributions equally. One hour equals one service credit...
.

What are ten facts about socialism

What are ten question about this
More

What is the basic funda of socialism?

When did Socialism first take shape?

Are there more liberal forms of socialism?

Isn't Socialism in a way one man rulership?
More

The historical experience of socialist countries has sadly demonstrated that collectivism does not do away with alienation but rather increases it, adding to it a lack of basic necessities and economic inefficiency.

The Idiots of socialism are slaves, but they are no one's property and therefore no one's loss.

Under communism (socialism), there is no incentive to supply people with anything they need or want, including safety.