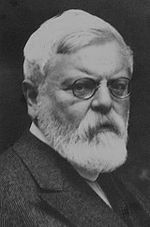 Theodor Fischer was a German
Germany
Germany , officially the Federal Republic of Germany , is a federal parliamentary republic in Europe. The country consists of 16 states while the capital and largest city is Berlin. Germany covers an area of 357,021 km2 and has a largely temperate seasonal climate...
architect
Architect
An architect is a person trained in the planning, design and oversight of the construction of buildings. To practice architecture means to offer or render services in connection with the design and construction of a building, or group of buildings and the space within the site surrounding the...
and teacher.

Fischer planned public housing projects for the city of Munich beginning in 1893. He was the joint founder and first chairman of the Deutscher Werkbund
Deutscher Werkbund
The Deutscher Werkbund was a German association of artists, architects, designers, and industrialists. The Werkbund was to become an important event in the development of modern architecture and industrial design, particularly in the later creation of the Bauhaus school of design...
(German work federation, 1907), as well as member of the German version of the Garden city movement
Garden city movement
The garden city movement is a method of urban planning that was initiated in 1898 by Sir Ebenezer Howard in the United Kingdom. Garden cities were intended to be planned, self-contained communities surrounded by "greenbelts" , containing proportionate areas of residences, industry and...
. In 1909 Fischer accepted a position as professor for architecture at the Technical University of Munich
Technical University of Munich
The Technische Universität München is a research university with campuses in Munich, Garching, and Weihenstephan...
.

Famous pupils of Fischer include Paul Bonatz
Paul Bonatz
Paul Bonatz was a German architect, member of the Stuttgart School and professor at the technical university in that city during part of World War II and from 1954 until his death....
, Hugo Häring
Hugo Häring
Hugo Häring was a German architect and architectural writer best known for his writings on "organic architecture", and as a figure in architectural debates about functionalism in the 1920s and 1930s, though he had an important role as an expressionist architect.A student of the great Theodor...
, Ernst May
Ernst May
Ernst May was a German architect and city planner.May successfully applied urban design techniques to the city of Frankfurt am Main during Germany's Weimar period, and in 1930 less successfully exported those ideas to Soviet Union cities, newly created under Stalinist rule...
, Erich Mendelsohn
Erich Mendelsohn
Erich Mendelsohn was a Jewish German architect, known for his expressionist architecture in the 1920s, as well as for developing a dynamic functionalism in his projects for department stores and cinemas.-Early life:...
, JJP Oud, Bruno Taut
Bruno Taut
Bruno Julius Florian Taut , was a prolific German architect, urban planner and author active during the Weimar period....
, German Bestelmeyer
German Bestelmeyer
German Bestelmeyer was a German architect, university lecturer, and proponent of Nazi architecture.-Life:...
and Paul Schmitthenner
Paul Schmitthenner
Paul Schmitthenner was a German architect and city planner from Lauterbourg, Alsace-Lorraine, one of Adolf Hitler's architects. He graduated from the University of Stuttgart and later became a Professor there, where he formed together with Paul Bonatz the architectural style of the Stuttgart School...
.

Originally an imitator of historical styles, he changed direction, seeking a style which was closer to German tradition; his rediscovery of the expressive qualities of stone influenced many of his pupils, and his search for a more genuinely volkisch style explains his nationalist utterances in the early part of the Third Reich. Fischer described his own style as something between historicism
Historicism
Historicism is a mode of thinking that assigns a central and basic significance to a specific context, such as historical period, geographical place and local culture. As such it is in contrast to individualist theories of knowledges such as empiricism and rationalism, which neglect the role of...
and art nouveau
Art Nouveau
Art Nouveau is an international philosophy and style of art, architecture and applied art—especially the decorative arts—that were most popular during 1890–1910. The name "Art Nouveau" is French for "new art"...
. He tried to always work in the local context, and the socio-cultural character of the region, with an eye toward the social effect of his plans.
The source of this article is wikipedia, the free encyclopedia.  The text of this article is licensed under the GFDL.