This page is about a place in the Philippines, for the novel, see Ermita (novel)
Ermita (novel)
Ermita: A Filipino Novel is a novel by the known Filipino author F. Sionil Jose written in the English language.-Scenes:F. Sionil José brings the reader to a story to a time in Philippine history before the declaration of Martial Law by Ferdinand Marcos during the 1950s. José also brings his...
.

Ermita is a district of Manila
Manila
Manila is the capital of the Philippines. It is one of the sixteen cities forming Metro Manila.Manila is located on the eastern shores of Manila Bay and is bordered by Navotas and Caloocan to the north, Quezon City to the northeast, San Juan and Mandaluyong to the east, Makati on the southeast,...
, Philippines located halfway between Intramuros
Intramuros
Intramuros is the oldest district in the present day city of Manila, the capital of the Republic of the Philippines. Nicknamed the "Walled City", Intramuros is the historic fortified city of Manila, the seat ot the government during the Spanish Colonial Period. Its name in Latin, intramuros,...
(the old walled city) and Malate
Malate, Manila
Malate is an old district of the city of Manila in Metro Manila, the Philippines. The district is located at the southern end of the city of Manila, bordered by Pasay City to the south, by Manila Bay to the west, by the district of Ermita to the north and by the districts of Paco and San Andres to...
.

Ermita was founded in the late 16th century. The name was taken from La Hermita, the Spanish
Spanish language
Spanish , also known as Castilian , is a Romance language in the Ibero-Romance group that evolved from several languages and dialects in central-northern Iberia around the 9th century and gradually spread with the expansion of the Kingdom of Castile into central and southern Iberia during the...
word for "hermitage", after the fact that on this site was built a hermitage housing an image of the Virgin Mary
Mary (mother of Jesus)
Mary , commonly referred to as "Saint Mary", "Mother Mary", the "Virgin Mary", the "Blessed Virgin Mary", or "Mary, Mother of God", was a Jewish woman of Nazareth in Galilee...
known as the Nuestra Señora de Guia (Our Lady of Guidance). The hermitage has since evolved into Ermita Church, which has been rebuilt several times since the early 17th century.

Ermita was rebuilt after the devastation of the war. University life remained vibrant therein. However, as decades passed, Ermita started earning a reputation as the red-light district
Red-light district
A red-light district is a part of an urban area where there is a concentration of prostitution and sex-oriented businesses, such as sex shops, strip clubs, adult theaters, etc...
of Manila. During the term of Mayor Alfredo Lim
Alfredo Lim
Alfredo Siojo Lim is the incumbent Mayor of the City of Manila and a former senator of the Philippines. A widower, he first served as mayor of Manila from 1992 to 1998 and returned to that post after winning in the 2007 mayoral election.-Early life and career:Born on December 21, 1929 in 1324 J...
, an effort was made to "clean up" Ermita, helping improve its reputation since then. However, a local city ordinance prohibiting the establishment, on grounds of public morality, of motels, lodging houses and other similar establishments, was later declared unconstitutional by the Supreme Court
Supreme Court of the Philippines
The Supreme Court of the Philippines is the Philippines' highest judicial court, as well as the court of last resort. The court consists of 14 Associate Justices and 1 Chief Justice...
. As a result of the clean-up efforts, nightlife in the area dwindled though it has picked up of late with the help of the emergence of the nearby Malate district and the Roxas Blvd. Baywalk area in the nightlife scene.

Ermiteño was a Spanish-creole that was spoken in Ermita, and lingua franca in the neighbourhood until the end of WWII. It is believed to be extinct today. 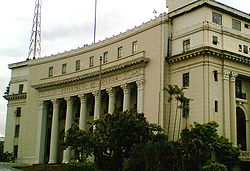 Several government institutions are housed in Ermita, including the
and other offices found along the old government center designed during the American era by architect and urban planner Daniel Burnham
Daniel Burnham
Daniel Hudson Burnham, FAIA was an American architect and urban planner. He was the Director of Works for the World's Columbian Exposition in Chicago. He took a leading role in the creation of master plans for the development of a number of cities, including Chicago and downtown Washington DC...
, such as the

Other sites of interest in Ermita include:

A number of educational institutions are also found in Ermita, including: