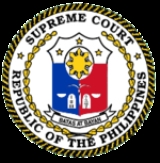 Hi All, Need some help here. My wife file for a gender correction in her birth certificate last year. After attending all the hearing. There were n...

They sat justice delayed is Justice denied, is there a time frame for each court to render decision on time? how to make follow up on court cases? The...

Is an unsigned insurance bond by the principal but notarized a lawfully valid document? Is it admissible in the court as legal document?

An unsigned insurance bond by the principal but notarized is a valid document? Is it admissible in our court as legal document?

How many days to appeal, after the rtc decision received?

1) What are the priority development programs/projects of the Philippine judiciary today? 2) Can you identify some of the priorities of the Judicia...

How to file an appeal in COURT of APPEALS (PHILIPPINES)

Is justice Corona's appointment could be considered legal?