Encyclopedia
Malate is an old district of the city of Manila
Manila
Manila is the capital of the Philippines. It is one of the sixteen cities forming Metro Manila.Manila is located on the eastern shores of Manila Bay and is bordered by Navotas and Caloocan to the north, Quezon City to the northeast, San Juan and Mandaluyong to the east, Makati on the southeast,...
in Metro Manila
Metro Manila
Metropolitan Manila , the National Capital Region , or simply Metro Manila, is the metropolitan region encompassing the City of Manila and its surrounding areas in the Philippines...
, the Philippines
Philippines
The Philippines , officially known as the Republic of the Philippines , is a country in Southeast Asia in the western Pacific Ocean. To its north across the Luzon Strait lies Taiwan. West across the South China Sea sits Vietnam...
. The district is located at the southern end of the city of Manila, bordered by Pasay City
Pasay City
The City of Pasay is one of the cities and municipalities that make up Metro Manila in the Philippines. It is bordered on the north by the country's capital, Manila, to the northeast by Makati City, to the east by Taguig City, and Parañaque City to the south.Pasay City was one of the original four...
to the south, by Manila Bay
Manila Bay
Manila Bay is a natural harbor which serves the Port of Manila , in the Philippines.The bay is considered to be one of the best natural harbors in Southeast Asia and one of the finest in the world...
to the west, by the district of Ermita
Ermita, Manila
Ermita is a district of Manila, Philippines located halfway between Intramuros and Malate.-History:Ermita was founded in the late 16th century...
to the north and by the districts of Paco
Paco, Manila
Paco, is a district of Manila, Philippines. It is located south of Pasig River, and San Miguel, west of Santa Ana, southwest of Pandacan, north of Malate, northwest of San Andres, and east of Ermita. According to the 2000 census, it has a population of 64,184 people in 13,438 households...
and San Andres
San Andres, Manila
San Andrés is a district located in the south east of the City of Manila in the Philippines, and includes what used to be the pre-World War II district of Singalong as well as parts of the Malate, and Paco districts. San Andrés shares its northeastern border with Santa Ana, and Paco, while to its...
to the east.

The word Malate is believed to have stemmed from the corruption of the Tagalog
Tagalog language
Tagalog is an Austronesian language spoken as a first language by a third of the population of the Philippines and as a second language by most of the rest. It is the first language of the Philippine region IV and of Metro Manila...
word "maalat," meaning "salty." Legends have it that tidewaters from Manila Bay flowed in-land as far as where the Remedios Circle is presently located. The salty sea water polluted the fresh water collected from wells, thus making drinking water in the area as salty as seawater.

Malate during the Spanish colonial period was an open space with a small fishing village. During the Spanish period, the center of activity was focused around the Malate church, the Our Lady of Remedios Parish that had a cult following among pregnant women having a difficult pregnancy.

When the Americans came to the country by the turn of the 19th century, American urban planners envisioned the development of Malate as the newest and trendiest exclusive residential area for American families. American expatriates and some of the old Spanish mestizo families populated the district in modern high rise apartments and wide aread bungalows.

After World War II, the extensive damage and carnage left behind by retreating Japanese occupational forces in the area and by the mortar shelling done by liberating by joint Filipino and American forces was not enough to level all the buildings and houses. Displaced wealthy families who abandoned their posh Malate homes returned and re-built their private villas and kept the whole district exclusively residential until the 1970s.

There are two sides of Malate, the domain of wealthy expatriates west of Taft Avenue from Pedro Gil street to Quirino Avenue and the lower middle class families east of Taft Avenue.

The once exclusive residential areas on the western portion of Malate started to transform in the 1970s into a commercial area with some big lotted houses and residential apartments being converted into small hotels and pensionne houses. Specialty restaurants and cafes also started to open in the district, as a result of the spill over of business from next-door Ermita district, which was for a time the red-light district of Manila.

Malate has been called the center of gay night life, and has a Gay Pride Parade
Gay pride parade
Pride parades for the LGBT community are events celebrating lesbian, gay, bisexual and transgender culture. The events also at times serve as demonstrations for legal rights such as same-sex marriage...
every year.

The western side of Malate across Taft Avenue remains as the quiet middle class homes with several apartment rows converted into dormitories for students enrolled at nearby schools.

The district can be directly accessed by main roads like the Roxas Boulevard, Quirino Avenue and Taft Avenue with well-known streets like Mabini and M.H. del Pilar.

In the 1990s, Malate and its neighbor Ermita has been "cleaned-up" and legitimate big businesses have sprouted in the district with hotels like the Hyatt Hotel and Casino, the Pan Pacific Hotel, the Manila Diamond Hotel, Sheraton Hotel, Grand Boulevard Hotel and the Cherry Blossoms Hotel.

Malate, east of Taft Avenue is continuously transforming itself as the center of recreation and entertainment for Manila with more restaurants, boutiques, entertainment halls, bars, discos and novelty stores opening for business. Life in the area that usually starts as soon as the famous Manila Bay sunset is over and the neon lights and loud glaring sounds are turned-on.

The block bounded by the streets; Maria Orosa, Julio Nakpil, Adriatico and Remedios have become synonymous to "street parties," al fresco drinking and dining, street dancing and even ground-level concerts.

The only public school managed and operated by the city government of Manila in the district is the Doña Aurora Quezon Elementary School. 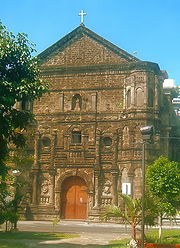 In front of the Malate Church or the historical Parish of Our Lady of Remedios is the Rajah Sulayman Park that boasts of a dancing water fountain. Further down Remedios street towards the east is the Remedios Circle that was improved and renovated under the administration of Mayor Jose L. Atienza, Jr.
Lito Atienza
Jose Livioko Atienza, Jr. , commonly known by his nickname Lito Atienza, is the former city mayor of Manila and former secretary of the Department of Environment and Resources. He stepped down as mayor of Manila on June 30, 2007, after serving a three-year three-term limit for local government...
in 2006.

Several restaurants have been erected at Baywalk
Baywalk
The Baywalk is a promenade overlooking Manila Bay along Roxas Boulevard in the city of Manila, Philippines. The Manila Baywalk is a two kilometre stretch between the US Embassy and the Cultural Center of the Philippines just past the Manila Yacht Club....
in Roxas Boulevard
Roxas Boulevard
Roxas Boulevard is a boulevard in Metro Manila, and an eight-lane arterial road that connects the center of Manila with Pasay City, Parañaque City. It is one of the major arteries in the city's metropolitan network, designated as Radial Road 1...
. However, because of a city ordinance, the businesses are now located in the bayside of SM
SM Prime Holdings
SM Prime Holdings, Inc. or SM Prime is the parent company of the SM Group's shopping malls. It is the largest shopping mall and retail operator in the Philippines...
Mall of Asia. An open playground across the Manila Zoological and Botanical Garden was also renovated and improved and is now called, the Leveriza Children's Park. 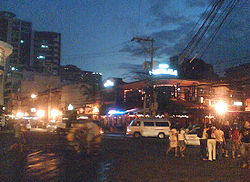 Night clubs, bars and discothèques are along the Malate portion of M.H. del PIlar, Mabini and Adriatico streets. Upscale restaurants line up from the corner of Adriatico and Remedios streets with the opening of landmark restaurants like the Cafe Adriatico, Larry's Bar and the Korean Village.

Visual and performing artists found a haven in Malate and in the 1980s, the open and nonexclusive watering hole for artists was Penguin Bar along Remedios Street fronting the Remedios Circle. Further along Remedios street is the M Chereville Hotel, for those who want the quiet and seclusion, nestled in the pulsating heart of Manila.

For a period of time, Malate was the place where artists, poets, writers, actors, and film industry professionals gathered, where there was no degree of hypocrisy practiced, just the basic rule of "come and be yourself, express yourself."