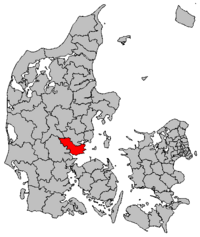 Hedensted Kommune is a municipality
Municipalities of Denmark
This is a list of Municipalities of Denmark.-Region Hovedstaden:* Albertslund Municipality* Allerød Municipality* Ballerup Municipality* Bornholm Regional Municipality* Brøndby Municipality* Copenhagen Municipality* Dragør Municipality* Egedal Municipality...
(Danish
Danish language
Danish is a North Germanic language spoken by around six million people, principally in the country of Denmark. It is also spoken by 50,000 Germans of Danish ethnicity in the northern parts of Schleswig-Holstein, Germany, where it holds the status of minority language...
, kommune) in Region Midtjylland
Region Midtjylland
Central Denmark Region or Central Jutland Region is an administrative region of Denmark established on January 1, 2007 as part of the 2007 Danish Municipal Reform, which replaced the traditional counties with five larger regions. At the same time, smaller municipalities were merged into larger...
on the Jutland
Jutland
Jutland , historically also called Cimbria, is the name of the peninsula that juts out in Northern Europe toward the rest of Scandinavia, forming the mainland part of Denmark. It has the North Sea to its west, Kattegat and Skagerrak to its north, the Baltic Sea to its east, and the Danish–German...
peninsula in central Denmark
Denmark
Denmark is a Scandinavian country in Northern Europe. The countries of Denmark and Greenland, as well as the Faroe Islands, constitute the Kingdom of Denmark . It is the southernmost of the Nordic countries, southwest of Sweden and south of Norway, and bordered to the south by Germany. Denmark...
. Its seat and main town is Hedensted
Hedensted
Hedensted is a Danish town, seat of Hedensted Municipality, in Region Midtjylland. Its population, including its northern neighbouring town Løsning, is of 11,282. The municipality as a whole has a population of 45,982 .-History:...
.

The municipality covers an area of 565 km² and has a total population of 45,954 (2009). Its mayor is Kirsten Terkilsen, a member of the liberal party
Venstre (Denmark)
VenstreThe party name is officially not translated into any other language, but is in English often referred to as the Liberal Party. Similar rules apply for the name of the party's youth wing Venstres Ungdom. , full name Venstre, Danmarks Liberale Parti , is the largest political party in Denmark...
Venstre. The main town and the site of its municipal council is the town of Hedensted.