The Dragon Throne is the English
English language
English is a West Germanic language that arose in the Anglo-Saxon kingdoms of England and spread into what was to become south-east Scotland under the influence of the Anglian medieval kingdom of Northumbria...
term used to identify the throne
Throne
A throne is the official chair or seat upon which a monarch is seated on state or ceremonial occasions. "Throne" in an abstract sense can also refer to the monarchy or the Crown itself, an instance of metonymy, and is also used in many expressions such as "the power behind the...
of the Emperor of China
Emperor of China
The Emperor of China refers to any sovereign of Imperial China reigning between the founding of Qin Dynasty of China, united by the King of Qin in 221 BCE, and the fall of Yuan Shikai's Empire of China in 1916. When referred to as the Son of Heaven , a title that predates the Qin unification, the...
. As the dragon was the emblem of imperial power, the throne of the Emperor was known as the Dragon Throne. The term can refer to very specific seating, as in the special seating in various structures in the Forbidden City
Forbidden City
The Forbidden City was the Chinese imperial palace from the Ming Dynasty to the end of the Qing Dynasty. It is located in the middle of Beijing, China, and now houses the Palace Museum...
of Beijing
Beijing
Beijing , also known as Peking , is the capital of the People's Republic of China and one of the most populous cities in the world, with a population of 19,612,368 as of 2010. The city is the country's political, cultural, and educational center, and home to the headquarters for most of China's...
or in the palaces of the Old Summer Palace
Old Summer Palace
The Old Summer Palace, known in China as Yuan Ming Yuan , and originally called the Imperial Gardens, was a complex of palaces and gardens in Beijing...
. In an abstract sense, the "Dragon Throne" also refers rhetorically to the head of state
Head of State
A head of state is the individual that serves as the chief public representative of a monarchy, republic, federation, commonwealth or other kind of state. His or her role generally includes legitimizing the state and exercising the political powers, functions, and duties granted to the head of...
and to the monarchy
Monarchy
A monarchy is a form of government in which the office of head of state is usually held until death or abdication and is often hereditary and includes a royal house. In some cases, the monarch is elected...
itself. The Daoguang Emperor
Daoguang Emperor
The Daoguang Emperor was the eighth emperor of the Manchurian Qing dynasty and the sixth Qing emperor to rule over China, from 1820 to 1850.-Early years:...
is said to have referred to his throne as "the divine utensil."

"My sacred and indulgent father had, in the year that he began to rule alone, silently settled that the divine utensil (the throne) should devolve on my contemptible person. I, knowing the feebleness of my virtue, at first felt much afraid I should not be competent to the office; but on reflecting that the sages, my ancestors, have left to posterity their plans; that his late majesty has laid the duty on me -— and heaven's throne should not be long vacant -— I have done violence to my feelings, and forced myself to intermit awhile my heartfelt grief, that I may with reverence obey the unalterable decree and on the 27th of the 8th moon (October 3rd), I purpose devoutly to announce the event to heaven, to earth, to my ancestors, and to the gods of the land and of the grain, and shall then sit down on the imperial throne."

When European and American military forces pushed their way into the Pekin
Pekin
-United States:*Pekin, Illinois*Pekin, Indiana*Pekin, Iowa*Pekin, Kentucky, now Paducah, Kentucky*Pekin, Maryland*Pekin Township, Michigan*Pekin, New York, hamlet in town of Cambria, New York*Pekin, North Dakota-Animals:*Red-billed Leiothrix, or Pekin Robin...
after the Boxer Rebellion
Boxer Rebellion
The Boxer Rebellion, also called the Boxer Uprising by some historians or the Righteous Harmony Society Movement in northern China, was a proto-nationalist movement by the "Righteous Harmony Society" , or "Righteous Fists of Harmony" or "Society of Righteous and Harmonious Fists" , in China between...
in 1900, they were the first men from the West to appear in the presence of the Dragon Throne since Isaac Titsingh
Isaac Titsingh
Isaac Titsingh FRS was a Dutch surgeon, scholar, merchant-trader and ambassador.During a long career in East Asia, Titsingh was a senior official of the Dutch East India Company . He represented the European trading company in exclusive official contact with Tokugawa Japan...
and Andreas Everardus van Braam Houckgeest
Andreas Everardus van Braam Houckgeest
Andreas Everardus van Braam Houckgeest Dutch-American merchant who is mostly known for his participation in the last Dutch embassy to China under the tributary system.- Early career :...
were received with grace and ceremony by Emperor Qianlong in 1795. William Elliot Griffis
William Elliot Griffis
William Elliot Griffis was an American orientalist, Congregational minister, lecturer, and prolific author....
was among those who did actually stand with cameras and notebooks before the Dragon Throne on a sunny September day in 1900; and he described what he saw:

There was the throne itself, a great three-leaved affair. Over the ample seat in the centre, with a high reredos, two great wings spread off from the central division. All was white marble and jade, liberally sculptured according to the canons of Chinese art. Along the top lay and leered dragons, each one " swinging the scaly horror of his folded tail" toward the central seat, his head projecting outward in the air. Below the throne were the three steps, on the broad second one of which the suppliant performed the nine prostrations or knocks of the head. 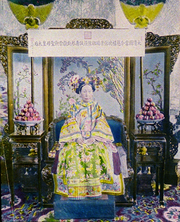 In Imperial China, the seat of power was called the Dragon's Seat or the Dragon Throne. The process of accession, the ceremonies of enthronement and the act being seated on the Dragon's Throne were roughly interchangeable.

The Dragon Throne was an hereditary monarchy
Monarchy
A monarchy is a form of government in which the office of head of state is usually held until death or abdication and is often hereditary and includes a royal house. In some cases, the monarch is elected...
in China before 1912. In much the same sense as the British Crown
The Crown
The Crown is a corporation sole that in the Commonwealth realms and any provincial or state sub-divisions thereof represents the legal embodiment of governance, whether executive, legislative, or judicial...
, the Dragon Throne became an abstract metonymic concept which represented the monarch and the legal authority for the existence of the government. Unlike its British counterpart, the concepts of Chinese monarchy evolved differently before 1912 when there was, for example, little perceived separation of the property of the nation-state from the person and personal holdings of the emperor.

According to tradition, the Chinese Empire began with the Qin Dynasty
Qin Dynasty
The Qin Dynasty was the first imperial dynasty of China, lasting from 221 to 207 BC. The Qin state derived its name from its heartland of Qin, in modern-day Shaanxi. The strength of the Qin state was greatly increased by the legalist reforms of Shang Yang in the 4th century BC, during the Warring...
in 221 BC; and the chronology of the emperors continued in unbroken succession until the fall of the Qing Dynasty
Qing Dynasty
The Qing Dynasty was the last dynasty of China, ruling from 1644 to 1912 with a brief, abortive restoration in 1917. It was preceded by the Ming Dynasty and followed by the Republic of China....
in 1912.

This flexible English term is also a rhetorical trope
Trope (literature)
A literary trope is the usage of figurative language in literature, or a figure of speech in which words are used in a sense different from their literal meaning...
. Depending on context, the Dragon Throne can be construed as a metonymy
Metonymy
Metonymy is a figure of speech used in rhetoric in which a thing or concept is not called by its own name, but by the name of something intimately associated with that thing or concept...
, which is a rhetorical device for an allusion relying on proximity or correspondence, as for example referring to actions of the Emperor
Emperor
An emperor is a monarch, usually the sovereign ruler of an empire or another type of imperial realm. Empress, the female equivalent, may indicate an emperor's wife or a woman who rules in her own right...
or as "actions of the Dragon Throne."

The Dragon Throne is also understood as a synecdoche
Synecdoche
Synecdoche , meaning "simultaneous understanding") is a figure of speech in which a term is used in one of the following ways:* Part of something is used to refer to the whole thing , or...
, which is related to metonymy and metaphor in suggesting a play on words by identifying a closely related conceptualization, e.g.,

In 1368, "[o]ne of the Hongwu Emperor
Hongwu Emperor
The Hongwu Emperor , known variably by his given name Zhu Yuanzhang and by his temple name Taizu of Ming , was the founder and first emperor of the Ming Dynasty of China...
's first acts upon ascending the Dragon Throne was to set up a network to spy on his subordinates and to register the entire population of China for the first time."

In 1418, "[t]he fleet moored just outside Malindi
Malindi
Malindi is a town on Malindi Bay at the mouth of the Galana River, lying on the Indian Ocean coast of Kenya. It is 120 kilometres northeast of Mombasa. The population of Malindi is 117,735 . It is the capital of the Malindi District.Tourism is the major industry in Malindi. The city is...
's coral reefs (off the east coast of what is today known as Kenya
Kenya
Kenya , officially known as the Republic of Kenya, is a country in East Africa that lies on the equator, with the Indian Ocean to its south-east...
). From the belly of the big ships came small rowboats and men in lavish silk robes. And among the faces were some the king recognized. These men he knew. They were his own ambassadors whom he had dispatched months ago on a tribute-bearing mission. Now emissaries of the Dragon Throne were returning them home, and they brought wondrous things to trade. But had so many men and so many ships come in peace or had they come to make the citizens of Malindi subjects of the Son of Heaven
Son of Heaven
Son of Heaven may refer to:* Emperor of China* Emperor of Japan* Emperors of Vietnam* Son of God* Son of Heaven , book on Guangxu Emperor by Princess Der Ling...
?"

In 1921, "... the movement for the restoration of the Throne will eventually have the hearty approval of the vast majority of the people. They will welcome it, not only because the Dragon Throne has been for ages an essential part of the Confucian system, inseparable from the ideas of an agricultural race born and bred on patriarchal Theism, but also because of the callous corruption and disorder with which the present administration has been identified all over the country.