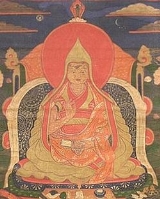 Overview
The Dalai Lama is a high lama in the Gelug
Gelug
The Gelug or Gelug-pa , also known as the Yellow Hat sect, is a school of Buddhism founded by Je Tsongkhapa , a philosopher and Tibetan religious leader...
or "Yellow Hat" branch of Tibetan Buddhism
Tibetan Buddhism
Tibetan Buddhism is the body of Buddhist religious doctrine and institutions characteristic of Tibet and certain regions of the Himalayas, including northern Nepal, Bhutan, and India . It is the state religion of Bhutan...
. The name is a combination of the Mongolian
Mongolian language
The Mongolian language is the official language of Mongolia and the best-known member of the Mongolic language family. The number of speakers across all its dialects may be 5.2 million, including the vast majority of the residents of Mongolia and many of the Mongolian residents of the Inner...
word далай (dalai) meaning "Ocean" and the Tibetan
Tibetan language
The Tibetan languages are a cluster of mutually-unintelligible Tibeto-Burman languages spoken primarily by Tibetan peoples who live across a wide area of eastern Central Asia bordering the Indian subcontinent, including the Tibetan Plateau and the northern Indian subcontinent in Baltistan, Ladakh,...
word bla-ma (with a silent "b") meaning "teacher". According to the current Dalai Lama, the Tibetan word "lama" corresponds precisely to the better known Sanskrit
Sanskrit
Sanskrit , is a historical Indo-Aryan language and the primary liturgical language of Hinduism, Jainism and Buddhism.Buddhism: besides Pali, see Buddhist Hybrid Sanskrit Today, it is listed as one of the 22 scheduled languages of India and is an official language of the state of Uttarakhand...
word "guru
Guru
A guru is one who is regarded as having great knowledge, wisdom, and authority in a certain area, and who uses it to guide others . Other forms of manifestation of this principle can include parents, school teachers, non-human objects and even one's own intellectual discipline, if the...
".

In religious terms, the Dalai Lama is believed by his devotees to be the rebirth
Rebirth (Buddhism)
Rebirth in Buddhism is the doctrine that the evolving consciousness or stream of consciousness upon death , becomes one of the contributing causes for the arising of a new aggregation...
of a long line of tulku
Tulku
In Tibetan Buddhism, a tulku is a particular high-ranking lama, of whom the Dalai Lama is one, who can choose the manner of his rebirth. Normally the lama would be reincarnated as a human, and of the same sex as his predecessor. In contrast to a tulku, all other sentient beings including other...
s who are considered to be manifestations of the bodhisattva
Bodhisattva
In Buddhism, a bodhisattva is either an enlightened existence or an enlightenment-being or, given the variant Sanskrit spelling satva rather than sattva, "heroic-minded one for enlightenment ." The Pali term has sometimes been translated as "wisdom-being," although in modern publications, and...
of compassion, Avalokiteśvara
Avalokitesvara
Avalokiteśvara is a bodhisattva who embodies the compassion of all Buddhas. He is one of the more widely revered bodhisattvas in mainstream Mahayana Buddhism....
.

How to plant in the soul the perfect condition desired?
More
x