Encyclopedia
The Peacock Throne, called Takht-e Tâvus in Persian
Persian language
Persian is an Iranian language within the Indo-Iranian branch of the Indo-European languages. It is primarily spoken in Iran, Afghanistan, Tajikistan and countries which historically came under Persian influence...
, is the name originally given to a Mughal
Mughal Empire
The Mughal Empire ,‎ or Mogul Empire in traditional English usage, was an imperial power from the Indian Subcontinent. The Mughal emperors were descendants of the Timurids...
throne
Throne
A throne is the official chair or seat upon which a monarch is seated on state or ceremonial occasions. "Throne" in an abstract sense can also refer to the monarchy or the Crown itself, an instance of metonymy, and is also used in many expressions such as "the power behind the...
of India
India
India , officially the Republic of India , is a country in South Asia. It is the seventh-largest country by geographical area, the second-most populous country with over 1.2 billion people, and the most populous democracy in the world...
, which was later adopted and used to describe the thrones of the Persian emperors from Nader Shah Afshari and erroneously to Mohammad Reza Shah Pahlavi whose throne was a reconstruction of the Achemenid throne. 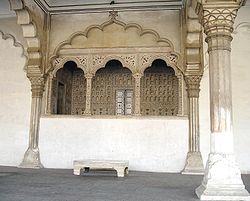 The name comes from the shape of a throne, having the figures of two peacocks standing behind it, their tails being expanded and the whole so inlaid with sapphires, rubies, emeralds, pearls and other precious stones of appropriate colors as to represent life, created for the Mughal
Mughal Empire
The Mughal Empire ,‎ or Mogul Empire in traditional English usage, was an imperial power from the Indian Subcontinent. The Mughal emperors were descendants of the Timurids...
Badshah Shah Jahan
Shah Jahan
Shah Jahan Shah Jahan (also spelled Shah Jehan, Shahjehan, , Persian: شاه جهان) (January 5, 1592 – January 22, 1666) Shah Jahan (also spelled Shah Jehan, Shahjehan, , Persian: شاه جهان) (January 5, 1592 – January 22, 1666) (Full title: His Imperial Majesty Al-Sultan al-'Azam wal Khaqan...
of India in the 17th century, which was in his imperial capital Delhi's
Delhi
Delhi , officially National Capital Territory of Delhi , is the largest metropolis by area and the second-largest by population in India, next to Mumbai. It is the eighth largest metropolis in the world by population with 16,753,265 inhabitants in the Territory at the 2011 Census...
Public audience hall, the Diwan-i-Am. Shah Jahan had the famous Koh-i-noor
Koh-i-Noor
The Kōh-i Nūr which means "Mountain of Light" in Persian, also spelled Koh-i-noor, Koh-e Noor or Koh-i-Nur, is a 105 carat diamond that was once the largest known diamond in the world. The Kōh-i Nūr originated in the state of Andhra Pradesh in India along with its double, the Darya-ye Noor...
diamond placed in this throne.

The French jeweller Tavernier, who saw Delhi in 1665, described the throne as of the shape of a bed (a "takhteh" or platform), 6 ft. by 4 ft., supported by four golden feet, 20 to 25 in. high, from the bars above which rose twelve columns to support the canopy; the bars were decorated with crosses of rubies and emeralds, and also with diamonds and pearls. In all there were 108 large rubies on the throne, and 116 emeralds, but many of the latter had flaws. The twelve columns supporting the canopy were decorated with rows of splendid pearls, and Tavernier considered these to be the most valuable part of the throne. Estimates of its value varied between Rs. 40 million (Bernier) and Rs. 100 million (Tavernier).

Nader Shah
Nader Shah
Nāder Shāh Afshār ruled as Shah of Iran and was the founder of the Afsharid dynasty. Because of his military genius, some historians have described him as the Napoleon of Persia or the Second Alexander...
invaded the Mughal Empire
Mughal Empire
The Mughal Empire ,‎ or Mogul Empire in traditional English usage, was an imperial power from the Indian Subcontinent. The Mughal emperors were descendants of the Timurids...
in 1738, and returned to Persia in 1739 with the original Peacock Throne as well as many other treasures taken from the Mughal emperor Muhammad Shah
Muhammad Shah
Muhammad Shah also known as Roshan Akhtar, was a Mughal emperor of India between 1719 and 1748. He was son of Khujista Akhtar Jahan Shah, the fourth son of Bahadur Shah I. Ascending the throne at 17 with the help of the Sayyid Brothers, he later got rid of them with the help of Nizam-ul-Mulk Chin...
.

According to an article by the Sunday Tribune,

It was, accordingly, ordered that, in addition to the jewels in the imperial jewel house, rubies, garnets, diamonds, rich pearls and emeralds in all weighing 230 kg should be brought for the inspection of the Emperor and they should be handed over to Bebadal Khan, the superintendent of the goldsmith’s department. There was also to be given to him 1150 kg of pure gold... The throne was to be three yards in length, two-and-a-half in breadth and five in height and was to be set with the above mentioned jewels. The outside of the canopy was to be of enamel work with occasional gems, the inside was to be thickly set with rubies, garnets and other jewels, and it was to be supported by 12 emerald columns. On the top of each pillar there were to be two peacocks, thick-set with gems and between each two peacocks a tree set with rubies and diamonds, emeralds and pearls. The ascent was to consist of three steps set with jewels of fine water". Of the 11 jewelled recesses formed around it for cushions, the middle one was intended for the seat it for Emperor. Among the historical diamonds decorating it were the famous Kohinoor (186 carats), the Akbar Shah (95 carats), the Shah (88.77 carats), the Jehangir (83 carats) and the second largest spinel ruby in the world — the Timur ruby (283 carats). A-20 couplet poem by the Mughal poet-laureate Qudsi, praising the Emperor in emerald letters was embedded in the throne. On March 12, 1635, Emperor Shah Jahan ascended for the first time the newly completed Peacock Throne. The French jeweller and traveller, Jean Baptiste Tavennier, who had the opportunity to examine the throne at close quarters, confirms the court chronicler’s description... Its place in the two fortress-palaces of Delhi and Agra was usually at the Hall of Private Audience known as Diwan-I-Khas, although it was kept at the Hall of Public Audience known as the Diwan-I-Am when larger audience were expected.

After Nader Shah
Nader Shah
Nāder Shāh Afshār ruled as Shah of Iran and was the founder of the Afsharid dynasty. Because of his military genius, some historians have described him as the Napoleon of Persia or the Second Alexander...
was assassinated in 1747, the original Peacock Throne disappeared from the records, stolen or dismantled in the chaos that ensued. Rumors were generated claiming that the throne was given to the Ottoman Sultan. However, later Iranian thrones were erroneously referred to as Peacock Thrones, although they resemble a chair rather than a platform. An example of such a throne is the Naderi throne
Naderi throne
The Naderi Throne of Iran is a gemmed and enameled throne made during Qajar era, now kept in the national treasure of the Central Bank of Iran. The throne has no relation to Nader Shah but the Persian word 'nader' that means "rare" or "unique" in the Persian language...
, built in 1812 for Fath Ali Shah Qajar. Another Iranian throne, built in 1836 for Mohammad Shah Qajar
Mohammad Shah Qajar
Mohammad Shah Qajar was king of Persia from the Qajar dynasty .- Rise to power :...
, is in fact in the shape of platform and sports legs that uncannily resemble the Indian Mughal paintings of the original Peacock Throne, and may indeed incorporate parts of the original throne. This throne, however, was known at the Takht-i Khurshid of the "Sun Throne" (after a radiant sun disk affixed to it headboard). In time, this throne has come to commandeer the name of the legendary the Peacock Throne, although only the legs and some other unspecified parts may belong to the original throne.

Although the Qajars referred to their throne as Peacock throne, the Pahlavi throne was a reconstruction of the Achemenid throne. Since then, the term Peacock Throne has consistently been misused to refer to the throne of the Pahlavi monarchy.

The Peacock Throne is a flexible English term. It is also a rhetorical trope
Trope (literature)
A literary trope is the usage of figurative language in literature, or a figure of speech in which words are used in a sense different from their literal meaning...
. Depending on context, the Peacock Throne can be construed as a metonymy
Metonymy
Metonymy is a figure of speech used in rhetoric in which a thing or concept is not called by its own name, but by the name of something intimately associated with that thing or concept...
, which is a rhetorical device for an allusion relying on proximity or correspondence, as for example referring to actions of the Mughal ruler or the shah or as "actions of the throne." The throne is also understood as a synecdoche
Synecdoche
Synecdoche , meaning "simultaneous understanding") is a figure of speech in which a term is used in one of the following ways:* Part of something is used to refer to the whole thing , or...
, which is related to metonymy and metaphor in suggesting a play on words by identifying a closely related conceptualization, e.g.,

"The bitter example of their own family history would sooner or later have driven Dara and Shuja and Aurangzeb and Murad to contend for the Peacock Throne with desperate fury."