Encyclopedia
The is the English
English language
English is a West Germanic language that arose in the Anglo-Saxon kingdoms of England and spread into what was to become south-east Scotland under the influence of the Anglian medieval kingdom of Northumbria...
term used to identify the throne
Throne
A throne is the official chair or seat upon which a monarch is seated on state or ceremonial occasions. "Throne" in an abstract sense can also refer to the monarchy or the Crown itself, an instance of metonymy, and is also used in many expressions such as "the power behind the...
of the Emperor of Japan
Emperor of Japan
The Emperor of Japan is, according to the 1947 Constitution of Japan, "the symbol of the state and of the unity of the people." He is a ceremonial figurehead under a form of constitutional monarchy and is head of the Japanese Imperial Family with functions as head of state. He is also the highest...
. The term can refer to very specific seating, such as the takamikura (高御座) throne in the Shishin-den at Kyoto Imperial Palace.

Various other thrones or seats that are used by the emperor in an official function, such as in Tokyo Imperial Palace or the throne used by the Emperor in the Diet of Japan
Diet of Japan
The is Japan's bicameral legislature. It is composed of a lower house, called the House of Representatives, and an upper house, called the House of Councillors. Both houses of the Diet are directly elected under a parallel voting system. In addition to passing laws, the Diet is formally...
during ceremonies associated with the delivery of his Speech from the Throne, are however not known as "Chrysanthemum Throne".

In a metonymic
Metonymy
Metonymy is a figure of speech used in rhetoric in which a thing or concept is not called by its own name, but by the name of something intimately associated with that thing or concept...
sense, the "Chrysanthemum Throne" also refers rhetorically to the head of state
Head of State
A head of state is the individual that serves as the chief public representative of a monarchy, republic, federation, commonwealth or other kind of state. His or her role generally includes legitimizing the state and exercising the political powers, functions, and duties granted to the head of...
and the institution of the Japanese monarchy
Monarchy
A monarchy is a form of government in which the office of head of state is usually held until death or abdication and is often hereditary and includes a royal house. In some cases, the monarch is elected...
itself. 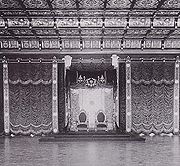 Japan is the oldest continuing hereditary monarchy
Monarchy
A monarchy is a form of government in which the office of head of state is usually held until death or abdication and is often hereditary and includes a royal house. In some cases, the monarch is elected...
in the world. In much the same sense as the British Crown
The Crown
The Crown is a corporation sole that in the Commonwealth realms and any provincial or state sub-divisions thereof represents the legal embodiment of governance, whether executive, legislative, or judicial...
, the Chrysanthemum Throne is an abstract metonymic concept that represents the monarch and the legal authority for the existence of the government.

Unlike its British counterpart, the concepts of Japanese monarchy evolved differently before 1947 when there was, for example, no perceived separation of the property of the nation-state from the person and personal holdings of the emperor.

According to legend, the Japanese monarchy is said to have been founded in 660 BC by Emperor Jimmu
Emperor Jimmu
was the first Emperor of Japan, according to the traditional order of succession. He is also known as Kamuyamato Iwarebiko and personally as Wakamikenu no Mikoto or Sano no Mikoto....
and the current Emperor
Akihito
is the current , the 125th emperor of his line according to Japan's traditional order of succession. He acceded to the throne in 1989.-Name:In Japan, the emperor is never referred to by his given name, but rather is referred to as "His Imperial Majesty the Emperor" which may be shortened to . In...
is the 125th monarch to occupy the Chrysanthemum Throne. The extant historical records only reach back to Emperor Ōjin
Emperor Ojin
, also known as Homutawake or , was the 15th emperor of Japan, according to the traditional order of succession.No firm dates can be assigned to this emperor's life or reign, but he is conventionally considered to have reigned from 270 to 310....
, who is considered to have reigned into the early 4th century.

In the 1920s, Hirohito
Hirohito
, posthumously in Japan officially called Emperor Shōwa or , was the 124th Emperor of Japan according to the traditional order, reigning from December 25, 1926, until his death in 1989. Although better known outside of Japan by his personal name Hirohito, in Japan he is now referred to...
served as Regent
Regent
A regent, from the Latin regens "one who reigns", is a person selected to act as head of state because the ruler is a minor, not present, or debilitated. Currently there are only two ruling Regencies in the world, sovereign Liechtenstein and the Malaysian constitutive state of Terengganu...
during several years of his father's reign, when Emperor Taishō
Emperor Taishō
The was the 123rd emperor of Japan, according to the traditional order of succession, reigning from 30 July 1912, until his death in 1926.The Emperor’s personal name was . According to Japanese customs, the emperor has no name during his reign and is only called the Emperor...
was physically unable to fulfill his Imperial duties. However, the Prince Regent lacked the symbolic powers of the throne which he could only attain after his father's death.

The metonymic
Metonymy
Metonymy is a figure of speech used in rhetoric in which a thing or concept is not called by its own name, but by the name of something intimately associated with that thing or concept...
meanings of "Chrysanthemum Throne" encompass the modern monarchy and the chronological list of legendary and historical monarchs of Japan. It is a term with fungible uses.

The throne takamikura (高御座) is located in Kyoto Imperial Palace and the oldest surviving throne used by the monarchy. It sits on an octagonal dais, five meters above the floor, and could be separated from the rest of the room by a curtain. The sliding door that hid the Emperor from view is called kenjō no shōji (賢聖障子), and had an image of 32 Chinese saints painted upon it, which became one of the primary models for all of Heian period painting. The throne is used mainly for the enthronment ceremony, along with a twin throne for the empress-consort.

This flexible English term is also a rhetorical trope. Depending on context, the Chrysanthemum Throne can be construed as a metonymy
Metonymy
Metonymy is a figure of speech used in rhetoric in which a thing or concept is not called by its own name, but by the name of something intimately associated with that thing or concept...
, which is a rhetorical device for an allusion relying on proximity or correspondence, as for example referring to actions of the Emperor
Emperor
An emperor is a monarch, usually the sovereign ruler of an empire or another type of imperial realm. Empress, the female equivalent, may indicate an emperor's wife or a woman who rules in her own right...
or as "actions of the Chrysanthemum Throne." The Chrysanthemum throne is also understood as a synecdoche
Synecdoche
Synecdoche , meaning "simultaneous understanding") is a figure of speech in which a term is used in one of the following ways:* Part of something is used to refer to the whole thing , or...
, which is related to metonymy and metaphor in suggesting a play on words by identifying a closely related conceptualization, e.g.,

January 20, 877 (Gangyō
Gangyo
was a after Jōgan and before Ninna. This period spanned the years from April 877 through February 885. The reigning emperor was .-Change of era:* January 18, 877 : The new era name was created to mark an event or series of events...
1, on the 3rd day of the 1st month) Yōzei was formally installed on the Chrysanthemum Throne; and the beginning of a new nengō was proclaimed.


During the State Visit in 2007 of the Emperor and Empress of Japan to the United Kingdom, the Times reported that "last night’s dinner was as informal as it could get when the House of Windsor entertains the Chrysanthemum Throne."