Encyclopedia
The Phoenix Throne is the English
English language
English is a West Germanic language that arose in the Anglo-Saxon kingdoms of England and spread into what was to become south-east Scotland under the influence of the Anglian medieval kingdom of Northumbria...
term used to identify the throne
Throne
A throne is the official chair or seat upon which a monarch is seated on state or ceremonial occasions. "Throne" in an abstract sense can also refer to the monarchy or the Crown itself, an instance of metonymy, and is also used in many expressions such as "the power behind the...
of the hereditary monarchs of Korea. In an abstract sense, the Phoenix Throne also refers rhetorically to the head of state
Head of State
A head of state is the individual that serves as the chief public representative of a monarchy, republic, federation, commonwealth or other kind of state. His or her role generally includes legitimizing the state and exercising the political powers, functions, and duties granted to the head of...
of the Joseon dynasty
Joseon Dynasty
Joseon , was a Korean state founded by Taejo Yi Seong-gye that lasted for approximately five centuries. It was founded in the aftermath of the overthrow of the Goryeo at what is today the city of Kaesong. Early on, Korea was retitled and the capital was relocated to modern-day Seoul...
(1392-1897) and the Empire of Korea (1897-1910).

The Phoenix motif symbolizs the king's supreme authority. The phoenix has a long association with Korean royalty — for example, in Goguryeo
Goguryeo
Goguryeo or Koguryŏ was an ancient Korean kingdom located in present day northern and central parts of the Korean Peninsula, southern Manchuria, and southern Russian Maritime province....
tomb murals like that of the Middle Gangseo Tumulus where the painted image of a phoenix is featured. 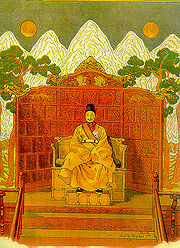 This flexible English term is also a rhetorical trope. Depending on context, the Phoenix Throne can be construed as a metonymy
Metonymy
Metonymy is a figure of speech used in rhetoric in which a thing or concept is not called by its own name, but by the name of something intimately associated with that thing or concept...
, which is a rhetorical device for an allusion relying on proximity or correspondence, as for example referring to actions of the monarch or as "actions of the Phoenix Throne."

The Phoenix Throne is also understood as a synecdoche
Synecdoche
Synecdoche , meaning "simultaneous understanding") is a figure of speech in which a term is used in one of the following ways:* Part of something is used to refer to the whole thing , or...
, which is related to metonymy and metaphor in suggesting a play on words by identifying a closely related conceptualization, e.g.,