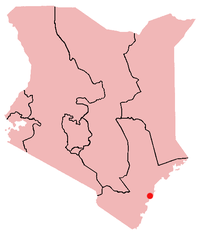 Malindi is a town on Malindi Bay at the mouth of the Galana River, lying on the Indian Ocean
Indian Ocean
The Indian Ocean is the third largest of the world's oceanic divisions, covering approximately 20% of the water on the Earth's surface. It is bounded on the north by the Indian Subcontinent and Arabian Peninsula ; on the west by eastern Africa; on the east by Indochina, the Sunda Islands, and...
coast of Kenya
Kenya
Kenya , officially known as the Republic of Kenya, is a country in East Africa that lies on the equator, with the Indian Ocean to its south-east...
. It is 120 kilometres northeast of Mombasa
Mombasa
Mombasa is the second-largest city in Kenya. Lying next to the Indian Ocean, it has a major port and an international airport. The city also serves as the centre of the coastal tourism industry....
. The population of Malindi is 117,735 (in 1999 census). It is the capital of the Malindi District
Malindi District
Malindi District is an administrative district in the Coast Province of Kenya. Its capital is the coastal town of Malindi. The district has a population of 544,303 . Malindi Town is increasingly becoming known as Kenya’s version of "Little Italy"...
.

Tourism is the major industry in Malindi. The city is exceptionally popular among Italian tourists. Malindi is served with a domestic airport and a highway between Mombasa and Lamu
Lamu
-Threats to Lamu:In a 2010 report titled Saving Our Vanishing Heritage, Global Heritage Fund identified Lamu as one of 12 worldwide sites most "On the Verge" of irreparable loss and damage, citing insufficient management and development pressure as primary causes.- See also :* Juma and the Magic...
. The nearby Watamu
Watamu
Watamu is a beach resort on the Indian Ocean coast of Kenya. It lies on a small headland, between the Blue Lagoon and Watamu Bay. Its main industries are tourism and fishing...
resort and Gedi Ruins (also known as Gede) are south of Malindi. The mouth of the Sabaki River
Athi-Galana-Sabaki River
Athi-Galana-Sabaki River is the second longest river in Kenya . It has a total length of 390 km, and drains a basin area of 70,000 km². The river rises at 1° 42' S...
lies in northern Malindi. The Watamu
Watamu Marine National Park
Watamu Marine National Park and Reserve is located in Kenya. Established in 1968, it was one of Kenya's first marine parks. It is located about north of Mombasa, Kenya's second largest city. Its coral gardens are merely from the shore and are home to approximately 600 species of fish, 110...
and Malindi Marine National Parks form a continuous protected coastal area south of Malindi. The area shows classic examples of Swahili architecture
Swahili architecture
Swahili architecture is a style of building along the eastern and southeastern coasts of Africa. Though essentially of Arabic or Persian style and origin; archaeological, written, linguistic, and cultural evidence also suggests strong African influence and sustainment. There is evidence of enduring...
.

Malindi is home to the Malindi Airport
Malindi Airport
-Location:Malindi Airport is located in Malindi District, Coast Province, in the town of Malindi, in southeastern Kenya, at the Indian Ocean coast....
and Broglio Space Centre.

Malindi has been a Swahili
Swahili people
The Swahili people are a Bantu ethnic group and culture found in East Africa, mainly in the coastal regions and the islands of Kenya, Tanzania and north Mozambique. According to JoshuaProject, the Swahili number in at around 1,328,000. The name Swahili is derived from the Arabic word Sawahil,...
settlement since the 14th century. Once rivaled only by Mombasa
Mombasa
Mombasa is the second-largest city in Kenya. Lying next to the Indian Ocean, it has a major port and an international airport. The city also serves as the centre of the coastal tourism industry....
for dominance in this part of East Africa, Malindi has traditionally been a port
Port
A port is a location on a coast or shore containing one or more harbors where ships can dock and transfer people or cargo to or from land....
city for foreign powers. In 1414, the town was visited by the fleet of the Chinese
China
Chinese civilization may refer to:* China for more general discussion of the country.* Chinese culture* Greater China, the transnational community of ethnic Chinese.* History of China* Sinosphere, the area historically affected by Chinese culture...
explorer Zheng He
Zheng He
Zheng He , also known as Ma Sanbao and Hajji Mahmud Shamsuddin was a Hui-Chinese mariner, explorer, diplomat and fleet admiral, who commanded voyages to Southeast Asia, South Asia, the Middle East, and East Africa, collectively referred to as the Voyages of Zheng He or Voyages of Cheng Ho from...
. Malindi's ruler sent a personal envoy with a giraffe as a present to China on that fleet.

Many traditional buildings
Swahili architecture
Swahili architecture is a style of building along the eastern and southeastern coasts of Africa. Though essentially of Arabic or Persian style and origin; archaeological, written, linguistic, and cultural evidence also suggests strong African influence and sustainment. There is evidence of enduring...
survive, including the Juma Mosque and palace
Palace
A palace is a grand residence, especially a royal residence or the home of a head of state or some other high-ranking dignitary, such as a bishop or archbishop. The word itself is derived from the Latin name Palātium, for Palatine Hill, one of the seven hills in Rome. In many parts of Europe, the...
on the beach
Beach
A beach is a geological landform along the shoreline of an ocean, sea, lake or river. It usually consists of loose particles which are often composed of rock, such as sand, gravel, shingle, pebbles or cobblestones...
, a stretch popular with tourists.

Malindi forms a municipal council with the following thirteen wards: Barani, Ganda/Mkaumoto, Gede, Gede North, Gede South, Kijiwetanga, Madunguni, Malimo, Malindi Central, Malindi North, Maweni, Shella, Watamu Town
Watamu
Watamu is a beach resort on the Indian Ocean coast of Kenya. It lies on a small headland, between the Blue Lagoon and Watamu Bay. Its main industries are tourism and fishing...
. All of them are located within Malindi Constituency
Malindi Constituency
Malindi Constituency is an electoral constituency in Kenya. It is one of two constituencies in Malindi District.- Members of Parliament :- Locations and wards :- External links :*...
.

The mayor of Malindi is Mohamed Menza.

Malindi is one of four administrative divisions
Divisions of Kenya
||The districts of Kenya are divided into 262 divisions . Divisions of Kenya are further subdivided into locations. The divisions are listed below, by district:-Baringo District:*Kabarnet*Kabartonjo*Marigat*Mochongoi*Mogotio*Nginyang...
in Malindi District. It has the following eight locations
Locations of Kenya
||Locations are a type of administrative region in Kenya. Location are a fourth level subdivision below Provinces, Districts and Divisions. Locations are further subdivided into Sub-locations . As of 1999 census there were 2,427 locations and 6,612 sublocations in Kenya .Each division in Kenya is...
: Chakama, Ganda, Gede, Goshi, Jilore, Langobaya, Malindi and Watamu.