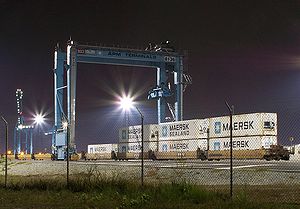 Another consideration is the maximum weight of a train. A maximum length train in Europe, 750 m (2,461 ft) long can have 50 container cars with a total weight of 2250 t (2,480.2 ST; 2,214.5 LT), and more if 20 ft containers are included. This is not so far from the limit using standard European couplers. Double-stacking requires allowing higher train weight to be meaningful, since it is higher train weights that saves costs. In the US, the AAR coupler used allows much higher train weight.

Double stack requires a higher clearance above the tracks, or loading gauge
Loading gauge
A loading gauge defines the maximum height and width for railway vehicles and their loads to ensure safe passage through bridges, tunnels and other structures...
, than do other forms of rail freight. Double-stack cars are most common in North America
North America
North America is a continent wholly within the Northern Hemisphere and almost wholly within the Western Hemisphere. It is also considered a northern subcontinent of the Americas...
where intermodal traffic is heavy and electrification
Railway electrification system
A railway electrification system supplies electrical energy to railway locomotives and multiple units as well as trams so that they can operate without having an on-board prime mover. There are several different electrification systems in use throughout the world...
is less widespread; thus overhead clearances are typically more manageable. Nonetheless, North American railroads have invested large sums to raise bridges and tunnel clearances along their routes and remove other obstacles to allow greater use of double stack trains and to give them more direct routes.


The last clearance offers the most flexibility, allowing two high cube containers to be stacked.

Southern Pacific Railroad
Southern Pacific Railroad
The Southern Pacific Transportation Company , earlier Southern Pacific Railroad and Southern Pacific Company, and usually simply called the Southern Pacific or Espee, was an American railroad....
(SP), along with Malcom McLean
Malcom McLean
Malcom Purcell McLean , born in Maxton, North Carolina, was an American entrepreneur, often called "the father of containerization"...
, came up with the idea of the first double-stack intermodal car in 1977. SP then designed the first car with ACF Industries
American Car and Foundry Company
American Car and Foundry is a manufacturer of railroad rolling stock. One of its subsidiaries was once a manufacturer of motor coaches and trolley coaches under the brand names of ACF and ACF-Brill. Today ACF is known as ACF Industries LLC and is based in St. Charles, Missouri...
that same year. At first it was slow to become an industry standard, then in 1984 American President Lines
American President Lines
American President Lines Ltd. is the world's seventh-largest container transportation and shipping company, providing services to more than 140 countries through a network combining intermodal freight transport operations with IT and e-commerce...
, started working with the SP and that same year, the first all double-stack train left Los Angeles, California
Los Angeles, California
Los Angeles , with a population at the 2010 United States Census of 3,792,621, is the most populous city in California, USA and the second most populous in the United States, after New York City. It has an area of , and is located in Southern California...
for South Kearny, New Jersey
South Kearny, New Jersey
South Kearny is an industrial district and distinct area of Hudson County, New Jersey at the northern end of Newark Bay in the town of Kearny, New Jersey. It is on larger peninisula once called New Barbadoes Neck, which also include the other Kearny districts of the Uplands and the Kearny Meadows...
, under the name of "Stacktrain" rail service. Along the way the train transferred from the SP to Conrail
Consolidated Rail Corporation
The Consolidated Rail Corporation, commonly known as Conrail , was the primary Class I railroad in the Northeast U.S. between 1976 and 1999. The federal government created it to take over the potentially profitable lines of bankrupt carriers, including the Penn Central Transportation Company and...
.

Low bridges and narrow tunnels in various locations prevent the operation of double-stack trains until costly upgrades are made. Some Class I railroad
Class I railroad
A Class I railroad in the United States and Mexico, or a Class I rail carrier in Canada, is a large freight railroad company, as classified based on operating revenue.Smaller railroads are classified as Class II and Class III...
companies in the U.S., often in partnership with government agencies, have recently initiated improvement programs to remove obstructions to double-stack trains, while other projects are in preliminary stages. Recent and proposed double-stack projects include:

Europe has a more restricted loading gauge
Loading gauge
A loading gauge defines the maximum height and width for railway vehicles and their loads to ensure safe passage through bridges, tunnels and other structures...
and train weights so there is no operation of double-stack cars so far.

Since electrification generally predated double stacking, the overhead wiring was too low to accommodate it. Many bridges and tunnels are too low for double-stacking, by far too expensive to rebuild for this reason. However, India is building some freight-only corridors with the overhead wiring at 7.45 m (24.4 ft) above rail, which is high enough. In India (passenger), Pakistan (passenger), Finland, Russia and Kazakhstan, 25 kV AC overhead wiring at 6.5 m (21.3 ft) above rail. Australia
Australia
Australia , officially the Commonwealth of Australia, is a country in the Southern Hemisphere comprising the mainland of the Australian continent, the island of Tasmania, and numerous smaller islands in the Indian and Pacific Oceans. It is the world's sixth-largest country by total area...
- double stack trains operate between Perth
Perth, Western Australia
Perth is the capital and largest city of the Australian state of Western Australia and the fourth most populous city in Australia. The Perth metropolitan area has an estimated population of almost 1,700,000....
, Adelaide
Adelaide
Adelaide is the capital city of South Australia and the fifth-largest city in Australia. Adelaide has an estimated population of more than 1.2 million...
, Darwin
Darwin, Northern Territory
Darwin is the capital city of the Northern Territory, Australia. Situated on the Timor Sea, Darwin has a population of 127,500, making it by far the largest and most populated city in the sparsely populated Northern Territory, but the least populous of all Australia's capital cities...
and Parkes, NSW 6.5 m (21 ft) clearances India
India
India , officially the Republic of India , is a country in South Asia. It is the seventh-largest country by geographical area, the second-most populous country with over 1.2 billion people, and the most populous democracy in the world...
- Mundra Port
Mundra Port
Mundra Port and Special Economic Zone Limited manages the largest privately owned port in the country. The port project was initiated in 1988 by the Adani Group as a logistics base for their international trade operations when the sector was opened for private sector...
operates double stack diesel trains on gauge using flatcar
Flatcar
A flatcar is a piece of railroad or railway rolling stock that consists of an open, flat deck on four or six wheels or a pair of trucks or bogies . The deck of the car can be wood or steel, and the sides of the deck can include pockets for stakes or tie-down points to secure loads...
s. It is one of only 3 countries to commercially double stack 9 in 6 in (2,895.6 mm) tall containers on a train.

Because of the broad gauge
Broad gauge
Broad-gauge railways use a track gauge greater than the standard gauge of .- List :For list see: List of broad gauges, by gauge and country- History :...
used in India and Pakistan, trains can carry standard shipping containers double-stacked on standard flatcar
Flatcar
A flatcar is a piece of railroad or railway rolling stock that consists of an open, flat deck on four or six wheels or a pair of trucks or bogies . The deck of the car can be wood or steel, and the sides of the deck can include pockets for stakes or tie-down points to secure loads...
s, which is more economical than single containers, but standard gauge railways in North American and elsewhere must use special double-stack cars to lower the center of gravity
Center of gravity
In physics, a center of gravity of a material body is a point that may be used for a summary description of gravitational interactions. In a uniform gravitational field, the center of mass serves as the center of gravity...
and reduce the loading gauge
Loading gauge
A loading gauge defines the maximum height and width for railway vehicles and their loads to ensure safe passage through bridges, tunnels and other structures...
. Indian Railways is able to carry containers double-stacked on standard flatcars at 100 km/h (62 mph). (Triple-stacked operation with lower, 6 in 6 in (1,981.2 mm) containers, is planned ). Flatcars, in addition to being much less expensive than well cars, can carry more containers in a given length of train.Experiments for double stacking under 25 kV AC overhead lines
Overhead lines
Overhead lines or overhead wires are used to transmit electrical energy to trams, trolleybuses or trains at a distance from the energy supply point...
have begun because of funds given by Japan. China
China
Chinese civilization may refer to:* China for more general discussion of the country.* Chinese culture* Greater China, the transnational community of ethnic Chinese.* History of China* Sinosphere, the area historically affected by Chinese culture...
- using double stacked container trains under 25 kV AC overhead lines
Overhead lines
Overhead lines or overhead wires are used to transmit electrical energy to trams, trolleybuses or trains at a distance from the energy supply point...
. Netherlands
Netherlands
The Netherlands is a constituent country of the Kingdom of the Netherlands, located mainly in North-West Europe and with several islands in the Caribbean. Mainland Netherlands borders the North Sea to the north and west, Belgium to the south, and Germany to the east, and shares maritime borders...
- The Betuweroute
Betuweroute
The Betuweroute is a double track freight railway from Rotterdam to Germany. Betuweroute is the official name, after the Betuwe area through which it passes, but the line is popularly referred to as Betuwelijn, after an older track in the same region. The Germans have named their part the...
, a freight rail between Rotterdam to the German border built 2007 is prepared for double-stacking insofar that tunnels are being built to accommodate double stack trains to reduce the cost and time of any future upgrade to the network. The current catenary wire is too low for double stack rail transport and the upgrade is dependent on the German section of the rail road connection. Great Britain
Great Britain
Great Britain or Britain is an island situated to the northwest of Continental Europe. It is the ninth largest island in the world, and the largest European island, as well as the largest of the British Isles...
- The small structure gauge
Structure gauge
The structure gauge, also called the minimum clearance outline, is the minimum height and width of tunnels and bridges as well as the minimum height and width of the doors that allow a rail siding access into a warehouse...
s and consequently small loading gauges on the British Railways mean that double stacking is not possible and that well cars are required to be able to transport 9 in 6 in (2,895.6 mm) high intermodal container
Intermodal container
An intermodal container is a standardized reusable steel box used for the safe, efficient and secure storage and movement of materials and products within a global containerized intermodal freight transport system...
s.


Many countries, like New Zealand
New Zealand
New Zealand is an island country in the south-western Pacific Ocean comprising two main landmasses and numerous smaller islands. The country is situated some east of Australia across the Tasman Sea, and roughly south of the Pacific island nations of New Caledonia, Fiji, and Tonga...
, have numerous low tunnels and bridges, which limits expansion for economic reasons.
The source of this article is wikipedia, the free encyclopedia.  The text of this article is licensed under the GFDL.