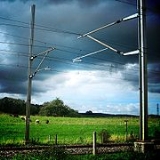 Overview
Overhead lines or overhead wires are used to transmit electrical energy to tram
Tram
A tram is a passenger rail vehicle which runs on tracks along public urban streets and also sometimes on separate rights of way. It may also run between cities and/or towns , and/or partially grade separated even in the cities...
s, trolleybus
Trolleybus
A trolleybus is an electric bus that draws its electricity from overhead wires using spring-loaded trolley poles. Two wires and poles are required to complete the electrical circuit...
es or trains at a distance from the energy supply point. These overhead lines are known variously as

In this article the generic term overhead line is used.

Overhead line is designed on the principle of one or more overhead wire
Wire
A wire is a single, usually cylindrical, flexible strand or rod of metal. Wires are used to bear mechanical loads and to carry electricity and telecommunications signals. Wire is commonly formed by drawing the metal through a hole in a die or draw plate. Standard sizes are determined by various...
s or rails
Rail profile
The rail profile is the cross sectional shape of a railway rail, perpendicular to the length of the rail.In all but very early cast iron rails, a rail is hot rolled steel of a specific cross sectional profile designed for use as the fundamental component of railway track.Unlike some other uses of...
(particularly in tunnels) situated over rail tracks
Rail tracks
The track on a railway or railroad, also known as the permanent way, is the structure consisting of the rails, fasteners, sleepers and ballast , plus the underlying subgrade...
, raised to a high electrical potential by connection to feeder stations at regular intervals.

CAN WE BUILD OVERHEAD LINES ON WOODEN POLES FOR 33 KV LINES WITH 600 Sqmm ACSR Conductor.What shold be the span length & the height of wooden poles.
More
x