Encyclopedia
The Demographics of Poland is about the demographic
Demographics
Demographics are the most recent statistical characteristics of a population. These types of data are used widely in sociology , public policy, and marketing. Commonly examined demographics include gender, race, age, disabilities, mobility, home ownership, employment status, and even location...
features of the population
Population
A population is all the organisms that both belong to the same group or species and live in the same geographical area. The area that is used to define a sexual population is such that inter-breeding is possible between any pair within the area and more probable than cross-breeding with individuals...
of Poland
Poland
Poland , officially the Republic of Poland , is a country in Central Europe bordered by Germany to the west; the Czech Republic and Slovakia to the south; Ukraine, Belarus and Lithuania to the east; and the Baltic Sea and Kaliningrad Oblast, a Russian exclave, to the north...
, including population density
Population density
Population density is a measurement of population per unit area or unit volume. It is frequently applied to living organisms, and particularly to humans...
, ethnicity
Ethnic group
An ethnic group is a group of people whose members identify with each other, through a common heritage, often consisting of a common language, a common culture and/or an ideology that stresses common ancestry or endogamy...
, education level, health of the populace, economic status, religious affiliations and other aspects of the population. 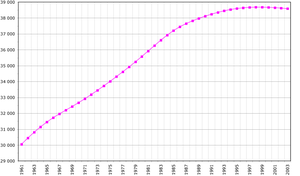 A number of censuses have assessed this data, including a national census in 2002, and a survey by the Helsinki Foundation for Human Rights (HFHR), which confirmed there are numerous autochthonous
Indigenous peoples
Indigenous peoples are ethnic groups that are defined as indigenous according to one of the various definitions of the term, there is no universally accepted definition but most of which carry connotations of being the "original inhabitants" of a territory....
ethnic groups in Poland. Estimates by INTEREG and Eurominority present a similar demographics picture of Poland but they provide estimates only for the most numerous of the autochthonous ethnic groups.

For many centuries, until the end of Second World War, the Polish population was composed of many significant ethnic minorities. The population of Poland decreased due to the losses sustained during World War II, and became one of the most ethnically homogeneous in Europe as a result of radically altered borders after the war. The subsequent repatriation
Repatriation
Repatriation is the process of returning a person back to one's place of origin or citizenship. This includes the process of returning refugees or soldiers to their place of origin following a war...
s were accompanied by two waves of forced migrations ordered by joint Polish and Soviet
Soviet Union
The Soviet Union , officially the Union of Soviet Socialist Republics , was a constitutionally socialist state that existed in Eurasia between 1922 and 1991....
authorities, who wished to remove the sizable Polish minorities from Lithuania
Lithuania
Lithuania , officially the Republic of Lithuania is a country in Northern Europe, the biggest of the three Baltic states. It is situated along the southeastern shore of the Baltic Sea, whereby to the west lie Sweden and Denmark...
, Belarus
Belarus
Belarus , officially the Republic of Belarus, is a landlocked country in Eastern Europe, bordered clockwise by Russia to the northeast, Ukraine to the south, Poland to the west, and Lithuania and Latvia to the northwest. Its capital is Minsk; other major cities include Brest, Grodno , Gomel ,...
and Ukraine
Ukraine
Ukraine is a country in Eastern Europe. It has an area of 603,628 km², making it the second largest contiguous country on the European continent, after Russia...
, deport Ukrainians back to USSR and expel the Germans from lands ceded to Poland after the Yalta Conference
Yalta Conference
The Yalta Conference, sometimes called the Crimea Conference and codenamed the Argonaut Conference, held February 4–11, 1945, was the wartime meeting of the heads of government of the United States, the United Kingdom, and the Soviet Union, represented by President Franklin D...
.

96.7% of the people of Poland
Poland
Poland , officially the Republic of Poland , is a country in Central Europe bordered by Germany to the west; the Czech Republic and Slovakia to the south; Ukraine, Belarus and Lithuania to the east; and the Baltic Sea and Kaliningrad Oblast, a Russian exclave, to the north...
claim Polish nationality
Poles
thumb|right|180px|The state flag of [[Poland]] as used by Polish government and diplomatic authoritiesThe Polish people, or Poles , are a nation indigenous to Poland. They are united by the Polish language, which belongs to the historical Lechitic subgroup of West Slavic languages of Central Europe...
, and 97.8% declare that they speak Polish
Polish language
Polish is a language of the Lechitic subgroup of West Slavic languages, used throughout Poland and by Polish minorities in other countries...
at home (Census 2002).

10,590 (2009) applications, mostly from the Russian Federation, Georgia
Georgia (country)
Georgia is a sovereign state in the Caucasus region of Eurasia. Located at the crossroads of Western Asia and Eastern Europe, it is bounded to the west by the Black Sea, to the north by Russia, to the southwest by Turkey, to the south by Armenia, and to the southeast by Azerbaijan. The capital of...
, and Armenia
Armenia
Armenia , officially the Republic of Armenia , is a landlocked mountainous country in the Caucasus region of Eurasia...
.

Polish 96.7%, German
Germans
The Germans are a Germanic ethnic group native to Central Europe. The English term Germans has referred to the German-speaking population of the Holy Roman Empire since the Late Middle Ages....
152.897 Ukrainians
Ukrainians
Ukrainians are an East Slavic ethnic group native to Ukraine, which is the sixth-largest nation in Europe. The Constitution of Ukraine applies the term 'Ukrainians' to all its citizens...
- 150.000 Belarusians
Belarusians
Belarusians ; are an East Slavic ethnic group who populate the majority of the Republic of Belarus. Introduced to the world as a new state in the early 1990s, the Republic of Belarus brought with it the notion of a re-emerging Belarusian ethnicity, drawn upon the lines of the Old Belarusian...
- 47.640 Vietnamese
Vietnamese people
The Vietnamese people are an ethnic group originating from present-day northern Vietnam and southern China. They are the majority ethnic group of Vietnam, comprising 86% of the population as of the 1999 census, and are officially known as Kinh to distinguish them from other ethnic groups in Vietnam...
- 40.000 Armenians
Armenians
Armenian people or Armenians are a nation and ethnic group native to the Armenian Highland.The largest concentration is in Armenia having a nearly-homogeneous population with 97.9% or 3,145,354 being ethnic Armenian....
- 20.858 Russians
Russians
The Russian people are an East Slavic ethnic group native to Russia, speaking the Russian language and primarily living in Russia and neighboring countries....
(including Chechens) - 12.550 Chinese
Chinese people
The term Chinese people may refer to any of the following:*People with Han Chinese ethnicity ....
- 8.016 Arabs - 4.072 Indians
India
India , officially the Republic of India , is a country in South Asia. It is the seventh-largest country by geographical area, the second-most populous country with over 1.2 billion people, and the most populous democracy in the world...
- 2.094

definition:
age 15 and over can read and write