Encyclopedia
Pomeranian Voivodeship, or Pomerania Province (in Polish
Polish language
Polish is a language of the Lechitic subgroup of West Slavic languages, used throughout Poland and by Polish minorities in other countries...
województwo pomorskie w), is a voivodeship
Voivodeships of Poland
The voivodeship, or province, called in Polish województwo , has been a high-level administrative subdivision of Poland since the 14th century....
, or province
Province
A province is a territorial unit, almost always an administrative division, within a country or state.-Etymology:The English word "province" is attested since about 1330 and derives from the 13th-century Old French "province," which itself comes from the Latin word "provincia," which referred to...
, in north-central Poland
Poland
Poland , officially the Republic of Poland , is a country in Central Europe bordered by Germany to the west; the Czech Republic and Slovakia to the south; Ukraine, Belarus and Lithuania to the east; and the Baltic Sea and Kaliningrad Oblast, a Russian exclave, to the north...
. It comprises most of Pomerelia
Pomerelia
Pomerelia is a historical region in northern Poland. Pomerelia lay in eastern Pomerania: on the southern shore of the Baltic Sea and west of the Vistula and its delta. The area centered on the city of Gdańsk at the mouth of the Vistula...
(the easternmost part of historical Pomerania
Pomerania
Pomerania is a historical region on the south shore of the Baltic Sea. Divided between Germany and Poland, it stretches roughly from the Recknitz River near Stralsund in the West, via the Oder River delta near Szczecin, to the mouth of the Vistula River near Gdańsk in the East...
), as well as an area east of the Vistula River. The western part of the province, around Słupsk, belonged historically to Farther Pomerania
Farther Pomerania
Farther Pomerania, Further Pomerania, Transpomerania or Eastern Pomerania , which before the German-Polish border shift of 1945 comprised the eastern part of the Duchy, later Province of Pomerania, roughly stretching from the Oder River in the West to Pomerelia in the East...
, while Pomerelia and the eastern bank of the Vistula belonged to the historical region of Prussia
Prussia (region)
Prussia is a historical region in Central Europe extending from the south-eastern coast of the Baltic Sea to the Masurian Lake District. It is now divided between Poland, Russia, and Lithuania...
. The central parts of the province are also known as Kashubia
Kashubia
Kashubia or Cassubia - is a language area in the historic Eastern Pomerania region of northwestern Poland. Located west of Gdańsk and the mouth of the Vistula river, it is inhabited by members of the Kashubian ethnic group....
, named after the Kashubian minority
Kashubians
Kashubians/Kaszubians , also called Kashubs, Kashubes, Kaszubians, Kassubians or Cassubians, are a West Slavic ethnic group in Pomerelia, north-central Poland. Their settlement area is referred to as Kashubia ....
. The provincial capital is Gdańsk
Gdansk
Gdańsk is a Polish city on the Baltic coast, at the centre of the country's fourth-largest metropolitan area.The city lies on the southern edge of Gdańsk Bay , in a conurbation with the city of Gdynia, spa town of Sopot, and suburban communities, which together form a metropolitan area called the...
.

The voivodeship contains 42 cities and towns. These are listed below in descending order of population (according to official figures for 2006 ):

Pomeranian Voivodeship is divided into 20 counties (powiat
Powiat
A powiat is the second-level unit of local government and administration in Poland, equivalent to a county, district or prefecture in other countries. The term powiat is most often translated into English as "county", although other terms are also sometimes used...
s): 4 city counties and 16 land counties. These are further divided into 123 gmina
Gmina
The gmina is the principal unit of administrative division of Poland at its lowest uniform level. It is often translated as "commune" or "municipality." As of 2010 there were 2,479 gminas throughout the country...
s.

The counties are listed in the following table (ordering within categories is by decreasing population). 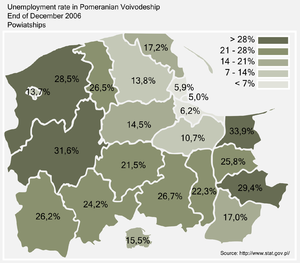 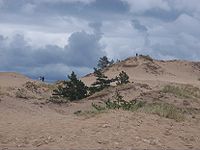