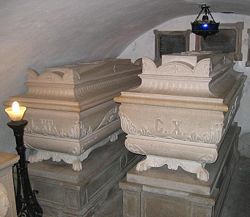 
A burial vault is a structural underground tomb
Tomb
A tomb is a repository for the remains of the dead. It is generally any structurally enclosed interment space or burial chamber, of varying sizes...
.

It is a stone or brick-lined underground space or 'burial' chamber for the interment of a dead
Death
Death is the permanent termination of the biological functions that sustain a living organism. Phenomena which commonly bring about death include old age, predation, malnutrition, disease, and accidents or trauma resulting in terminal injury....
body or bodies. They were originally and are still often vaulted
Vault (architecture)
A Vault is an architectural term for an arched form used to provide a space with a ceiling or roof. The parts of a vault exert lateral thrust that require a counter resistance. When vaults are built underground, the ground gives all the resistance required...
and usually have stone slab entrances. They are often privately owned and used for specific family or other groups, but usually stand beneath a public religious building, such as a church, or in a churchyard
Churchyard
A churchyard is a patch of land adjoining or surrounding a church which is usually owned by the relevant church or local parish itself. In the Scots language or Northern English language this can also be known as a kirkyard or kirkyaird....
or cemetery
Cemetery
A cemetery is a place in which dead bodies and cremated remains are buried. The term "cemetery" implies that the land is specifically designated as a burying ground. Cemeteries in the Western world are where the final ceremonies of death are observed...
. A crypt
Crypt
In architecture, a crypt is a stone chamber or vault beneath the floor of a burial vault possibly containing sarcophagi, coffins or relics....
may be used as a burial vault.
The source of this article is wikipedia, the free encyclopedia.  The text of this article is licensed under the GFDL.