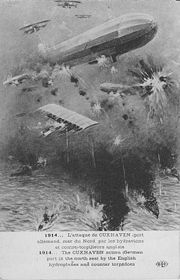 The Cuxhaven Raid was a British
United Kingdom
The United Kingdom of Great Britain and Northern IrelandIn the United Kingdom and Dependencies, other languages have been officially recognised as legitimate autochthonous languages under the European Charter for Regional or Minority Languages...
ship-based air-raid
Airstrike
An air strike is an attack on a specific objective by military aircraft during an offensive mission. Air strikes are commonly delivered from aircraft such as fighters, bombers, ground attack aircraft, attack helicopters, and others...
on the German naval forces at Cuxhaven mounted on Christmas Day, 1914
1914 in aviation
This is a list of aviation-related events from 1914.The outbreak of World War I accelerates all aspects of aviation which in turn changes war in a twofold way. The aeroplane turns the sky into a new battle field and eliminates the distinction between frontline and hinterland, with the civilian...
.

It was described at the time as an "air reconnaissance of the Heligoland Bight, including Cuxhaven, Heligoland
Heligoland
Heligoland is a small German archipelago in the North Sea.Formerly Danish and British possessions, the islands are located in the Heligoland Bight in the south-eastern corner of the North Sea...
and Wilhelmshaven
Wilhelmshaven
Wilhelmshaven is a coastal town in Lower Saxony, Germany. It is situated on the western side of the Jade Bight, a bay of the North Sea.-History:...
... by naval seaplanes" during which "the opportunity was taken of attacking with bombs points of military importance" in northern Imperial Germany.

The Zeppelin
Zeppelin
A Zeppelin is a type of rigid airship pioneered by the German Count Ferdinand von Zeppelin in the early 20th century. It was based on designs he had outlined in 1874 and detailed in 1893. His plans were reviewed by committee in 1894 and patented in the United States on 14 March 1899...
sheds in Cuxhaven were out of range of UK-based aircraft, so a plan was developed for three seaplane tenders (HMS Engadine
HMS Engadine (1911)
HMS Engadine was a seaplane tender which served in the First World War. She was built as a Folkestone-Boulogne ferry by William Denny and Brothers, launched on 23 September 1911 and named after the Engadine valley in Switzerland...
, Riviera
HMS Riviera
Built as a fast Cross-Channel steamer for the South East and Chatham Railway Co., HMS Riviera was requisitioned by the Admiralty on 11 August 1914 and converted by Chatham Dockyard to carry and operate four seaplanes....
and Empress
HMS Empress (1914)
HMS Empress was a seaplane carrier of the Royal Navy that served during World War I. Converted from the Cross-Channel packet ship Empress, the ship's aircraft conducted aerial reconnaissance, observation and bombing missions in the North Sea and Eastern Mediterranean. During the last year of the...
), supported by the Harwich Force
Harwich Force
The Harwich Force was a squadron of the Royal Navy, formed during the First World War, that went on to play a significant role in the war.-History:...
, a group of cruiser
Cruiser
A cruiser is a type of warship. The term has been in use for several hundreds of years, and has had different meanings throughout this period...
s, destroyer
Destroyer
In naval terminology, a destroyer is a fast and maneuverable yet long-endurance warship intended to escort larger vessels in a fleet, convoy or battle group and defend them against smaller, powerful, short-range attackers. Destroyers, originally called torpedo-boat destroyers in 1892, evolved from...
s and submarine
Submarine
A submarine is a watercraft capable of independent operation below the surface of the water. It differs from a submersible, which has more limited underwater capability...
s commanded by Commodore
Commodore (rank)
Commodore is a military rank used in many navies that is superior to a navy captain, but below a rear admiral. Non-English-speaking nations often use the rank of flotilla admiral or counter admiral as an equivalent .It is often regarded as a one-star rank with a NATO code of OF-6, but is not always...
Reginald Yorke Tyrwhitt
Reginald Tyrwhitt
Admiral of the Fleet Sir Reginald Yorke Tyrwhitt, 1st Baronet, GCB, DSO was a senior officer of the Royal Navy in World War I who commanded light forces stationed at Harwich on the east coast of England during the first part of the war.-Naval career:Tyrwhitt entered the Navy as a cadet in July, 1885...
, to launch three seaplanes each from their station near Helgoland in the German Bight
German Bight
German Bight is the southeastern bight of the North Sea bounded by the Netherlands and Germany to the south, and Denmark and Germany to the east . To the north and west it is limited by the Dogger Bank. The Bight contains the Frisian and Danish Islands. The Wadden Sea is approximately ten to...
. The objective was to reconnoitre military installations in the area and, if possible, bomb the Zeppelin sheds at Cuxhaven. Lieutenant
Lieutenant
A lieutenant is a junior commissioned officer in many nations' armed forces. Typically, the rank of lieutenant in naval usage, while still a junior officer rank, is senior to the army rank...
Erskine Childers
Robert Erskine Childers
Robert Erskine Childers DSC , universally known as Erskine Childers, was the author of the influential novel Riddle of the Sands and an Irish nationalist who smuggled guns to Ireland in his sailing yacht Asgard. He was executed by the authorities of the nascent Irish Free State during the Irish...
RNVR, the yachtsman and author of Riddle of the Sands, who had sailed the area before the war, provided the navigational briefing and accompanied Flight Commander Cecil Francis Kilner as navigator and observer.

On Christmas Day, 1914, the first combined sea and air strike was executed by the Royal Navy, aimed at locating and if possible bombing the dirigible sheds housing German 'Zeppelin' airships, in a pre-emptive strike to prevent the airships from attacking the United Kingdom.
The air temperature was just above 0°C and of the nine seaplanes lowered to the water, only seven (three 100 hp Mono-Gnome Short Improved Type 74 "Folder
Short Folder
Short Folder is a generic name often applied to several different Short Brothers' aircraft types designed and built prior to and during World War I...
s", two 160 hp Short Type 81 Folders and two further 'Folders', the 135 hp Short Type 135 and the 200 hp Short Type 135, all carrying three 20-pound bombs) were able to start their engines and take off. Those unable to take part, a Short Type 81 (serial no. 122) and a Short 'Improved Type 74' (serial no. 812), were winched back on board.

Fog, low cloud and anti-aircraft fire prevented the raid from being a complete success, although several sites were attacked. Nevertheless the raid demonstrated the feasibility of attack by ship-borne aircraft and showed the strategic importance of this new weapon. According to a telegram dated 7 January 1915, held in the "Churchill Archives Centre", at Churchill College, Cambridge
Cambridge
The city of Cambridge is a university town and the administrative centre of the county of Cambridgeshire, England. It lies in East Anglia about north of London. Cambridge is at the heart of the high-technology centre known as Silicon Fen – a play on Silicon Valley and the fens surrounding the...
, the "Admiralty Chief Censor intercepted message from Hartvig, Kjobenhaven to the Daily Mail, reporting that the British aerial raid on Cuxhaven [Germany] had forced the German Admiralty to remove the greater part of the High Seas Fleet
High Seas Fleet
The High Seas Fleet was the battle fleet of the German Empire and saw action during World War I. The formation was created in February 1907, when the Home Fleet was renamed as the High Seas Fleet. Admiral Alfred von Tirpitz was the architect of the fleet; he envisioned a force powerful enough to...
from Cuxhaven to various places on the Kiel Canal."

It is worth noting that the crews of all seven aircraft survived the raid, having been airborne for over three hours. Three aircraft, a 100 hp Short 'Improved Type 74' (RNAS serial no. 811, flown by Flt. Lt. C. H. K. Edmonds), a 160 hp Short Admiralty Type 81 (RNAS serial no. 119, Flt. Cdr. R. P. Ross), and a Short Admiralty Type 135 (RNAS serial no. 136, Flt. Cdr. C. F. Kilner with Lt. Erskine Childers as his observer), regained their tenders and were recovered; three others (one 'Admiralty Type 81', RNAS serial no. 120, Flt. Lt. A. J. Miley, and two 100 hp Short 'Improved Type 74' folders, RNAS serial nos. 814 (Flt. Sub-Lt. V. Gaskell-Blackburn) and 815 (Flt. Cdr. D. A. Oliver)) landed off the East Friesian island of Norderney
Norderney
Norderney is one of the seven populated East Frisian Islands off the North Sea coast of Germany. It is also a municipality in the district of Aurich in Lower Saxony....
and their crews were taken on board the submarine E11
HMS E11
HMS E11 was an E-class submarine of the Royal Navy launched on 23 April 1914. E11 was one of the most successful submarines in action during the 1915 naval operations in the Dardanelles Campaign, sinking over 80 vessels of all sizes in three tours of the Sea of Marmara.-European operations:In...
, under the command of Lieutenant-Commander Martin Nasmith
Martin Eric Nasmith
Admiral Sir Martin Eric Dunbar-Nasmith VC, KCB, KCMG, RN , was an English recipient of the Victoria Cross, the highest and most prestigious award for gallantry in the face of the enemy that can be awarded to British and Commonwealth forces...
(the aircraft being scuttled to prevent them from falling into enemy hands); the seventh aircraft, a Short Admiralty Type 135 (RNAS serial no. 135) piloted by Flt. Lt. Francis E.T. Hewlett, suffered engine problems and was seen to ditch into the sea some 8 miles off Helgoland. Hewlett was posted as missing, but he was found by the Dutch trawler Marta van Hattem, which took him on board and returned him to the port of Ymuiden in Holland, where he disembarked on 2 January 1915 whence he made his way back to England.


Decorations ensuing from the action

For their part in the Cuxhaven Raid, Cecil Kilner and Flight Lieutenant
Flight Lieutenant
Flight lieutenant is a junior commissioned rank in the Royal Air Force and the air forces of many Commonwealth countries. It ranks above flying officer and immediately below squadron leader. The name of the rank is the complete phrase; it is never shortened to "lieutenant"...
Charles Humphrey Kingsman Edmonds, R.N. were awarded the DSO
Distinguished Service Order
The Distinguished Service Order is a military decoration of the United Kingdom, and formerly of other parts of the British Commonwealth and Empire, awarded for meritorious or distinguished service by officers of the armed forces during wartime, typically in actual combat.Instituted on 6 September...
; Chief Petty Officer
Chief Petty Officer
A chief petty officer is a senior non-commissioned officer in many navies and coast guards.-Canada:"Chief Petty Officer" refers to two ranks in the Canadian Navy...
Mechanic James William Bell and Chief Petty Officer Mechanic Gilbert Howard William Budds were awarded the DSM
Distinguished Service Medal (United Kingdom)
The Distinguished Service Medal was a military decoration awarded to personnel of the Royal Navy and members of the other services, and formerly also to personnel of other Commonwealth countries, up to and including the rank of Chief Petty Officer, for bravery and resourcefulness on active service...
.
The source of this article is wikipedia, the free encyclopedia.  The text of this article is licensed under the GFDL.