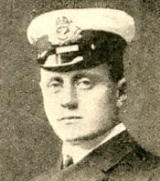 Educated at Eastman's College in Winchester
Winchester
Winchester is a historic cathedral city and former capital city of England. It is the county town of Hampshire, in South East England. The city lies at the heart of the wider City of Winchester, a local government district, and is located at the western end of the South Downs, along the course of...
and the Royal Naval College, Dartmouth
HMS Prince of Wales (1860)
HMS Prince of Wales was one of six 121-gun screw-propelled first-rate three-decker line-of-battle ships of the Royal Navy. She was launched on 25 January 1860...
, Dunbar-Nasmith joined the Royal Navy
Royal Navy
The Royal Navy is the naval warfare service branch of the British Armed Forces. Founded in the 16th century, it is the oldest service branch and is known as the Senior Service...
in 1898.

He was 32 years old, and a Lieutenant-Commander in the Royal Navy
Royal Navy
The Royal Navy is the naval warfare service branch of the British Armed Forces. Founded in the 16th century, it is the oldest service branch and is known as the Senior Service...
during World War I, when the following deed took place for which he was awarded the VC.

He was appointed Commandant
Commandant
Commandant is a senior title often given to the officer in charge of a large training establishment or academy. This usage is common in anglophone nations...
of the Royal Naval College Dartmouth
Britannia Royal Naval College
Britannia Royal Naval College is the initial officer training establishment of the Royal Navy, located on a hill overlooking Dartmouth, Devon, England. While Royal Naval officer training has taken place in the town since 1863, the buildings which are seen today were only finished in 1905, and...
in 1926 and then became Rear Admiral Submarines in 1929. He became Commander-in-Chief of the East Indies Station
East Indies Station
The East Indies Station was a formation of the British Royal Navy from 1865 to 1941.From 1831 to 1865 the East Indies and the China Station were a single command known as the East Indies and China Station...
in 1932 and Second Sea Lord and Chief of Naval Personnel
Second Sea Lord
The Second Sea Lord and Commander-in-Chief Naval Home Command , commonly just known as the Second Sea Lord , is one of the most senior admirals of the British Royal Navy , and is responsible for personnel and naval shore establishments.-History:In 1805, for the first time, specific functions were...
in 1935. He was Commander-in-Chief, Plymouth
Commander-in-Chief, Plymouth
The Commander-in-Chief, Plymouth was a senior commander of the Royal Navy for hundreds of years. Plymouth Command was a name given to the units, establishments, and staff operating under the admiral's command. In the nineteenth century the holder of the office was known as Commander-in-Chief,...
from 1938 and then Commander-in-Chief of Plymouth and Western Approaches Command
Western Approaches Command
Commander-in-Chief, Western Approaches was the commander of a major operational command of the Royal Navy during World War II. The admiral commanding, and his forces, sometimes informally known as 'Western Approaches Command,' were responsible for the safety of British shipping in the Western...
from the outbreak of war in September 1939. He served as Flag Officer in charge of London
London
London is the capital city of :England and the :United Kingdom, the largest metropolitan area in the United Kingdom, and the largest urban zone in the European Union by most measures. Located on the River Thames, London has been a major settlement for two millennia, its history going back to its...
from 1942 and retired in 1946. 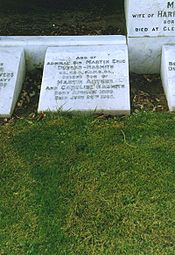