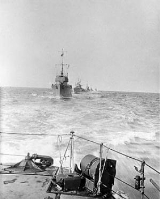 Encyclopedia
The Harwich Force was a squadron of the Royal Navy
Royal Navy
The Royal Navy is the naval warfare service branch of the British Armed Forces. Founded in the 16th century, it is the oldest service branch and is known as the Senior Service...
, formed during the First World War
World War I
World War I , which was predominantly called the World War or the Great War from its occurrence until 1939, and the First World War or World War I thereafter, was a major war centred in Europe that began on 28 July 1914 and lasted until 11 November 1918...
, that went on to play a significant role in the war.

After the outbreak of the First World War, a priority for the Royal Navy was to secure the approaches to the English Channel
English Channel
The English Channel , often referred to simply as the Channel, is an arm of the Atlantic Ocean that separates southern England from northern France, and joins the North Sea to the Atlantic. It is about long and varies in width from at its widest to in the Strait of Dover...
, to prevent elements of the German
Kaiserliche Marine
The Imperial German Navy was the German Navy created at the time of the formation of the German Empire. It existed between 1871 and 1919, growing out of the small Prussian Navy and Norddeutsche Bundesmarine, which primarily had the mission of coastal defense. Kaiser Wilhelm II greatly expanded...
High Seas Fleet
High Seas Fleet
The High Seas Fleet was the battle fleet of the German Empire and saw action during World War I. The formation was created in February 1907, when the Home Fleet was renamed as the High Seas Fleet. Admiral Alfred von Tirpitz was the architect of the fleet; he envisioned a force powerful enough to...
from breaking out into the Atlantic, or from interfering with British maritime trade and convoys to the continent. Most of the major fleet units of the Grand Fleet had dispersed to the navy's anchorage at Scapa Flow
Scapa Flow
right|thumb|Scapa Flow viewed from its eastern endScapa Flow is a body of water in the Orkney Islands, Scotland, United Kingdom, sheltered by the islands of Mainland, Graemsay, Burray, South Ronaldsay and Hoy. It is about...
or to other North Eastern ports to monitor the northern route from the North Sea
North Sea
In the southwest, beyond the Straits of Dover, the North Sea becomes the English Channel connecting to the Atlantic Ocean. In the east, it connects to the Baltic Sea via the Skagerrak and Kattegat, narrow straits that separate Denmark from Norway and Sweden respectively...
into the Atlantic. Consequently, a number of patrol flotillas were organised along the south and east coasts of England, with commands established at several of the major ports in the region. The Dover Patrol
Dover Patrol
The Dover Patrol was a Royal Navy command of the First World War, notable for its involvement in the Zeebrugge Raid on 22 April 1918. The Dover Patrol formed a discrete unit of the Royal Navy based at Dover and Dunkirk for the duration of the First World War...
was based at Dover
Dover
Dover is a town and major ferry port in the home county of Kent, in South East England. It faces France across the narrowest part of the English Channel, and lies south-east of Canterbury; east of Kent's administrative capital Maidstone; and north-east along the coastline from Dungeness and Hastings...
, consisting mostly of destroyer
Destroyer
In naval terminology, a destroyer is a fast and maneuverable yet long-endurance warship intended to escort larger vessels in a fleet, convoy or battle group and defend them against smaller, powerful, short-range attackers. Destroyers, originally called torpedo-boat destroyers in 1892, evolved from...
s, while a number of pre-dreadnought
Pre-dreadnought
Pre-dreadnought battleship is the general term for all of the types of sea-going battleships built between the mid-1890s and 1905. Pre-dreadnoughts replaced the ironclad warships of the 1870s and 1880s...
s and cruiser
Cruiser
A cruiser is a type of warship. The term has been in use for several hundreds of years, and has had different meanings throughout this period...
s were based at Portland Harbour
Portland Harbour
Portland Harbour is located beside the Isle of Portland, off Dorset, on the south coast of England. It is one of the largest man-made harbours in the world. Grid reference: .-History:...
. A large number of destroyers, flotilla leader
Flotilla leader
A flotilla leader was a warship suitable for commanding a flotilla of destroyers or other small warships, typically a small cruiser or a large destroyer...
s and light cruiser
Light cruiser
A light cruiser is a type of small- or medium-sized warship. The term is a shortening of the phrase "light armored cruiser", describing a small ship that carried armor in the same way as an armored cruiser: a protective belt and deck...
s were centred at Harwich
Harwich
Harwich is a town in Essex, England and one of the Haven ports, located on the coast with the North Sea to the east. It is in the Tendring district. Nearby places include Felixstowe to the northeast, Ipswich to the northwest, Colchester to the southwest and Clacton-on-Sea to the south...
, under the command of Commodore Reginald Tyrwhitt
Reginald Tyrwhitt
Admiral of the Fleet Sir Reginald Yorke Tyrwhitt, 1st Baronet, GCB, DSO was a senior officer of the Royal Navy in World War I who commanded light forces stationed at Harwich on the east coast of England during the first part of the war.-Naval career:Tyrwhitt entered the Navy as a cadet in July, 1885...
.

The Harwich Force consisted of between four and eight light cruisers, several flotilla leaders and usually between 30 and 40 destroyers, with numbers fluctuating throughout the war, and organised into flotilla
Flotilla
A flotilla , or naval flotilla, is a formation of small warships that may be part of a larger fleet. A flotilla is usually composed of a homogeneous group of the same class of warship, such as frigates, destroyers, torpedo boats, submarines, gunboats, or minesweepers...
s. Also stationed at Harwich was a submarine force under Commodore Roger Keyes. In early 1917, the Harwich Force consisted of eight light cruisers, two flotilla leaders and 45 destroyers. By the end of the year, there were nine light cruisers, four flotilla leaders and 24 destroyers. The combination of light, fast ships was intended to provide effective scouting and reconnaissance, whilst still being able to engage German light forces, and to frustrate attempts at minelaying in the Channel.

It was intended that the Harwich Force would operate when possible in conjunction with the Dover Patrol, and the Admiralty
Admiralty
The Admiralty was formerly the authority in the Kingdom of England, and later in the United Kingdom, responsible for the command of the Royal Navy...
intended that the Harwich force would also be able to support the Grand Fleet if it moved into the area. Tyrwhitt was also expected to carry out reconnaissance of German naval activities in the southern parts of the North Sea, and to escort ships sailing between the Thames and Holland. Tyrwhitt's objectives were often complicated by the need to provide reinforcements for the Dover Patrol. The force fired the first shots of the war when a flotilla led by sank the minelayer
Minelayer
Minelaying is the act of deploying explosive mines. Historically this has been carried out by ships, submarines and aircraft. Additionally, since World War I the term minelayer refers specifically to a naval ship used for deploying naval mines...
on 5 August 1914. During the war, the Force captured or sank 24 enemy merchants, and it escorted 520 eastbound and 511 westbound ships between Dutch and British ports. Their ships also took part in the Cuxhaven Raid
Cuxhaven Raid
The Cuxhaven Raid was a British ship-based air-raid on the German naval forces at Cuxhaven mounted on Christmas Day, 1914.Aircraft of the Royal Naval Air Service were carried to within striking distance by seaplane tenders of the Royal Navy, supported by both surface ships and submarines...
on Christmas Day, 1914.

The force was also active in a number of clashes with the Kaiserliche Marine
Kaiserliche Marine
The Imperial German Navy was the German Navy created at the time of the formation of the German Empire. It existed between 1871 and 1919, growing out of the small Prussian Navy and Norddeutsche Bundesmarine, which primarily had the mission of coastal defense. Kaiser Wilhelm II greatly expanded...
(German Navy). Their ships were present at the Battles of Heligoland Bight, Texel
Battle off Texel
The Battle off Texel, also known as the Action off Texel or the Action of 17 October 1914, was a naval battle off the coast of the Dutch island of Texel during the First World War where a British squadron consisting of one light cruiser and four destroyers on a routine patrol encountered the...
, and Dogger Bank
Battle of Dogger Bank (1915)
The Battle of Dogger Bank was a naval battle fought near the Dogger Bank in the North Sea on 24 January 1915, during the First World War, between squadrons of the British Grand Fleet and the German High Seas Fleet....
, and were mobilised after the German raids on Scarborough, Hartlepool and Whitby
Raid on Scarborough, Hartlepool and Whitby
The raid on Scarborough, Hartlepool and Whitby, which took place on 16 December 1914, was an attack by the Imperial German Navy on the British seaport towns of Scarborough, Hartlepool, West Hartlepool, and Whitby. The attack resulted in 137 fatalities and 592 casualties, many of which were civilians...
in 1914, and on Yarmouth and Lowestoft
Bombardment of Yarmouth and Lowestoft
The Bombardment of Yarmouth and Lowestoft was a naval battle fought during the First World War between the German Empire and the British Empire in the North Sea....
in 1916. They were called out during the lead up to the Battle of Jutland
Battle of Jutland
The Battle of Jutland was a naval battle between the British Royal Navy's Grand Fleet and the Imperial German Navy's High Seas Fleet during the First World War. The battle was fought on 31 May and 1 June 1916 in the North Sea near Jutland, Denmark. It was the largest naval battle and the only...
, but did not take part in the battle. After the end of the war, Harwich was designated the port at which the remaining German U-boat
U-boat
U-boat is the anglicized version of the German word U-Boot , itself an abbreviation of Unterseeboot , and refers to military submarines operated by Germany, particularly in World War I and World War II...
s would be surrendered, and Tyrwhitt's Harwich Force oversaw the operation.
The source of this article is wikipedia, the free encyclopedia.  The text of this article is licensed under the GFDL.