A seaplane tender is a ship
Ship
Since the end of the age of sail a ship has been any large buoyant marine vessel. Ships are generally distinguished from boats based on size and cargo or passenger capacity. Ships are used on lakes, seas, and rivers for a variety of activities, such as the transport of people or goods, fishing,...
that provides facilities for operating seaplane
Seaplane
A seaplane is a fixed-wing aircraft capable of taking off and landing on water. Seaplanes that can also take off and land on airfields are a subclass called amphibian aircraft...
s. These ships were the first aircraft carrier
Aircraft carrier
An aircraft carrier is a warship designed with a primary mission of deploying and recovering aircraft, acting as a seagoing airbase. Aircraft carriers thus allow a naval force to project air power worldwide without having to depend on local bases for staging aircraft operations...
s and appeared just before the First World War
World War I
World War I , which was predominantly called the World War or the Great War from its occurrence until 1939, and the First World War or World War I thereafter, was a major war centred in Europe that began on 28 July 1914 and lasted until 11 November 1918...
.

The first seaplane tender appeared in 1911 with the French Navy La Foudre
La Foudre
The Foudre was a French seaplane carrier, the first in history. Her development followed the invention of the seaplane in 1910 with the French Le Canard.-Torpedo boat tender:...
, following the invention of the seaplane
Seaplane
A seaplane is a fixed-wing aircraft capable of taking off and landing on water. Seaplanes that can also take off and land on airfields are a subclass called amphibian aircraft...
in 1910 with the French Le Canard
Le Canard
|-See also:-References:* The Illustrated Encyclopedia of Aircraft , 1985, Orbis Publishing-External links:*...
. La Foudre carried float-equipped planes under hangars on the main deck, from where they were lowered on the sea with a crane. La Foudre was further modified in November 1913 with a 10 metre-long flat deck to launch her seaplanes. Another early seaplane carrier was , an old cruiser converted and commissioned with a flying-off deck in mid-1913.

In the Battle of Tsingtao
Battle of Tsingtao
The Siege of Tsingtao was the attack on the German-controlled port of Tsingtao in China during World War I by Imperial Japan and the United Kingdom....
, from 5 September 1914, the Imperial Japanese Navy
Imperial Japanese Navy
The Imperial Japanese Navy was the navy of the Empire of Japan from 1869 until 1947, when it was dissolved following Japan's constitutional renunciation of the use of force as a means of settling international disputes...
seaplane carrier conducted the world′s first naval-launched air raids from Kiaochow Bay. The four Maurice Farman
Maurice Farman
Maurice Alain Farman was a French Grand Prix motor racing champion, an aviator, and an aircraft manufacturer and designer.-Biography:...
seaplanes bombarded German-held land targets (communication centers and command centers) and damaged a German minelayer in the Tsingtao
Qingdao
' also known in the West by its postal map spelling Tsingtao, is a major city with a population of over 8.715 million in eastern Shandong province, Eastern China. Its built up area, made of 7 urban districts plus Jimo city, is home to about 4,346,000 inhabitants in 2010.It borders Yantai to the...
peninsula from September to 6 November 1914, when the Germans surrendered.

On Christmas Day 1914, the British carried out the Cuxhaven Raid
Cuxhaven Raid
The Cuxhaven Raid was a British ship-based air-raid on the German naval forces at Cuxhaven mounted on Christmas Day, 1914.Aircraft of the Royal Naval Air Service were carried to within striking distance by seaplane tenders of the Royal Navy, supported by both surface ships and submarines...
; seaplanes carried within range of their targets attacked German naval targets in the Heligoland Bight
Heligoland Bight
The Heligoland Bight, also known as Helgoland Bight, is a bay which forms the southern part of the German Bight, itself a bay of the North Sea, located at the mouth of the Elbe river...
.

These carriers had hangar
Hangar
A hangar is a closed structure to hold aircraft or spacecraft in protective storage. Most hangars are built of metal, but other materials such as wood and concrete are also sometimes used...
s for storing and maintaining the aircraft, but no flight deck
Flight deck
The flight deck of an aircraft carrier is the surface from which its aircraft take off and land, essentially a miniature airfield at sea. On smaller naval ships which do not have aviation as a primary mission, the landing area for helicopters and other VTOL aircraft is also referred to as the...
as in a true aircraft carrier. Instead, they used cranes to lower the aircraft into the sea for takeoff and to recover them after landing. The ships were normally converted merchant vessel
Armed merchantmen
Armed merchantman is a term that has come to mean a merchant ship equipped with guns, usually for defensive purposes, either by design or after the fact. In the days of sail, piracy and privateers, many merchantmen would be routinely armed, especially those engaging in long distance and high value...
s rather than specially constructed for the task. As aircraft improved the problems of using seaplanes became more of a handicap. The aircraft could only be operated in a smooth sea and the ship had to stop for launching or recovery, both of which took around 20 minutes. The tender was often stationed 10 mi (8.7 nmi; 16.1 km) or so in front of the main battle fleet with the cruiser
Cruiser
A cruiser is a type of warship. The term has been in use for several hundreds of years, and has had different meanings throughout this period...
screen so that it would not fall hopelessly behind when it launched its aircraft. Seaplanes also had poorer performance than other aircraft because of the drag and weight of the floats. Seaplane tenders had largely been superseded by aircraft carriers in the battle fleet by the end of the First World War, although aircraft were still of minor importance compared to the firepower of naval artillery.

The British was a seaplane tender with a flying-off deck. Seaplanes could be recovered while the ship was under way through the "Hein Mat" — a sheet towed behind the vessel, once the aircraft was on the mat it was effectively stationary with respect to the ship and could be hoisted aboard.

In the inter-war years, it was common for cruiser
Cruiser
A cruiser is a type of warship. The term has been in use for several hundreds of years, and has had different meanings throughout this period...
s and battleship
Battleship
A battleship is a large armored warship with a main battery consisting of heavy caliber guns. Battleships were larger, better armed and armored than cruisers and destroyers. As the largest armed ships in a fleet, battleships were used to attain command of the sea and represented the apex of a...
s to be equipped with catapult
Catapult
A catapult is a device used to throw or hurl a projectile a great distance without the aid of explosive devices—particularly various types of ancient and medieval siege engines. Although the catapult has been used since ancient times, it has proven to be one of the most effective mechanisms during...
-launched reconnaissance seaplanes. A few navies—especially those without true aircraft carriers—also acquired catapult-equipped seaplane carriers for fleet reconnaissance. 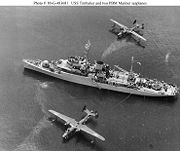 During the Second World War
World War II
World War II, or the Second World War , was a global conflict lasting from 1939 to 1945, involving most of the world's nations—including all of the great powers—eventually forming two opposing military alliances: the Allies and the Axis...
, both the American
United States Navy
The United States Navy is the naval warfare service branch of the United States Armed Forces and one of the seven uniformed services of the United States. The U.S. Navy is the largest in the world; its battle fleet tonnage is greater than that of the next 13 largest navies combined. The U.S...
and the Japanese Navies
Imperial Japanese Navy
The Imperial Japanese Navy was the navy of the Empire of Japan from 1869 until 1947, when it was dissolved following Japan's constitutional renunciation of the use of force as a means of settling international disputes...
built a number of seaplane tenders to supplement their aircraft carrier fleets. However, these ships often had their catapults removed, and were used as support vessels that operated seaplanes from harbours rather than in a seaway. These aircraft were generally for long range reconnaissance patrols. The tenders allowed the aircraft to be rapidly deployed to new bases because their runways did not have to be constructed, and support facilities were mobile much like supply ships for submarine
Submarine tender
A submarine tender is a type of ship that supplies and supports submarines.Submarines are small compared to most oceangoing vessels, and generally do not have the ability to carry large amounts of food, fuel, torpedoes, and other supplies, nor to carry a full array of maintenance equipment and...
s or destroyer
Destroyer tender
A destroyer tender is a ship designed to provide maintenance support to a flotilla of destroyers or other small warships. The use of this class has faded from its peak in the first half of the 20th century as the roles of small combatants have evolved .Due to the increased size and automation of...
s.

Seaplane tenders became obsolete at the end of the Second World War. A few remained in service after the war but by the late-1950s most had been scrapped or converted to other uses such as helicopter
Helicopter
A helicopter is a type of rotorcraft in which lift and thrust are supplied by one or more engine-driven rotors. This allows the helicopter to take off and land vertically, to hover, and to fly forwards, backwards, and laterally...
repair ships.