In music
Music
Music is an art form whose medium is sound and silence. Its common elements are pitch , rhythm , dynamics, and the sonic qualities of timbre and texture...
, the BACH motif is the motif
Motif (music)
In music, a motif or motive is a short musical idea, a salient recurring figure, musical fragment or succession of notes that has some special importance in or is characteristic of a composition....
, a succession of notes important or characteristic to a piece
Musical composition
Musical composition can refer to an original piece of music, the structure of a musical piece, or the process of creating a new piece of music. People who practice composition are called composers.- Musical compositions :...
, B flat, A, C, B natural. In German musical nomenclature, in which the note B natural is written as H and the B flat as B, it forms Johann Sebastian Bach
Johann Sebastian Bach
Johann Sebastian Bach was a German composer, organist, harpsichordist, violist, and violinist whose sacred and secular works for choir, orchestra, and solo instruments drew together the strands of the Baroque period and brought it to its ultimate maturity...
's family name. One of the most frequently occurring examples of a musical cryptogram
Musical cryptogram
A musical cryptogram is a cryptogrammatic sequence of musical notes, a sequence which can be taken to refer to an extra-musical text by some 'logical' relationship, usually between note names and letters. The most common and best known examples result from composers using ciphered versions of their...
, the motif has been used by countless composers, especially after the Bach Revival in the first half of the 19th century.

"The figure occurs so often in Bach's bass lines that it cannot have been accidental." Hans-Heinrich Eggebrecht goes as far as to reconstruct Bach's putative intentions as an expression of Lutheran
Lutheranism
Lutheranism is a major branch of Western Christianity that identifies with the theology of Martin Luther, a German reformer. Luther's efforts to reform the theology and practice of the church launched the Protestant Reformation...
thought, imagining Bach to be saying, "I am identified with the tonic and it is my desire to reach it....Like you I am human. I am in need of salvation; I am certain in the hope of salvation, and have been saved by grace." through his use of the motif rather than a standard changing tone
Changing tone
In music, changing tones consists of two consecutive non-chord tones. The first moves in one direction by a step from a chord tone, then skips by a third in the opposite direction to another non-chord tone, and then finally resolves back to the original chord tone...
figure (B-A-C-B) in the double discant
Discant
Discant was a style of liturgical setting in the Middle Ages, associated with the development of the Notre Dame school of polyphony. It is a style of organum that includes a plainchant tenor part, with a "note against note" upper voice, moving in contrary motion...
clausula
Clausula
In Roman rhetoric, a clausula was a rhythmic figure used to add finesse and finality to the end of a sentence or phrase. There was a large range of popular clausulae...
in the fourth fugue of The Art of Fugue
The Art of Fugue
The Art of Fugue , BWV 1080, is an incomplete work by Johann Sebastian Bach . It was most likely started at the beginning of the 1740s, if not earlier. The first known surviving version, which contained 12 fugues and 2 canons, was copied by the composer in 1745...
. 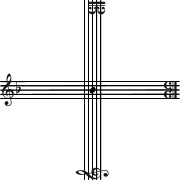 Bach's contemporaries knew of the motif's possibilities: it was discussed in Johann Gottfried Walther
Johann Gottfried Walther
Johann Gottfried Walther was a German music theorist, organist, composer, and lexicographer of the Baroque era.Walther was born at Erfurt...
's Musicalisches Lexikon (1732), and used as a fugue subject by Bach's son Johann Christian
Johann Christian Bach
Johann Christian Bach was a composer of the Classical era, the eleventh and youngest son of Johann Sebastian Bach. He is sometimes referred to as 'the London Bach' or 'the English Bach', due to his time spent living in the British capital...
and by his pupil Johann Ludwig Krebs
Johann Ludwig Krebs
Johann Ludwig Krebs was a Rococo musician and composer primarily for the pipe organ.-Life:Krebs was born in 1713 in Buttelstedt, Germany to Johann Tobias Krebs, a well-known organist. J. Tobias had at least three sons who were considered musically talented, and J...
. However, the motif's wide popularity came only in the 19th century during and after the so-called Bach Revival, when works by Johann Sebastian Bach
Johann Sebastian Bach
Johann Sebastian Bach was a German composer, organist, harpsichordist, violist, and violinist whose sacred and secular works for choir, orchestra, and solo instruments drew together the strands of the Baroque period and brought it to its ultimate maturity...
were rediscovered by composers and the public.

In a comprehensive study published in the catalogue for the 1985 exhibition "300 Jahre Johann Sebastian Bach" ("300 years of Johann Sebastian Bach") in Stuttgart, Germany
Stuttgart
Stuttgart is the capital of the state of Baden-Württemberg in southern Germany. The sixth-largest city in Germany, Stuttgart has a population of 600,038 while the metropolitan area has a population of 5.3 million ....
, Ulrich Prinz lists 409 works by 330 composers from the 17th to the 20th century using the BACH motif (ISBN 3-7952-0459-3). A similar list is available in Malcolm Boyd's volume on Bach; it also contains some 400 works. Some of the more famous works that feature the motif prominently are: