Encyclopedia
A tetraconch, from the Greek for "four shells", is a building, usually a church or other religious building, with four apse
Apse
In architecture, the apse is a semicircular recess covered with a hemispherical vault or semi-dome...
s, one in each direction, usually of equal size. The basic ground plan of the building is therefore a Greek cross
Cross-in-square
The term cross-in-square or crossed-dome denotes the dominant architectural form of middle- and late-period Byzantine churches. The first cross-in-square churches were probably built in the late 8th century, and the form has remained in use throughout the Orthodox world until the present day...
. They are most common in Byzantine architecture
Byzantine architecture
Byzantine architecture is the architecture of the Byzantine Empire. The empire gradually emerged as a distinct artistic and cultural entity from what is today referred to as the Roman Empire after AD 330, when the Roman Emperor Constantine moved the capital of the Roman Empire east from Rome to...
, and related schools such as Armenia
Armenia
Armenia , officially the Republic of Armenia , is a landlocked mountainous country in the Caucasus region of Eurasia...
n and - it has been argued that they were developed in these areas or Syria, and the issue is a matter of contention between the two nations in the Caucasus
Caucasus
The Caucasus, also Caucas or Caucasia , is a geopolitical region at the border of Europe and Asia, and situated between the Black and the Caspian sea...
. Apart from churches, the form is suitable for a mausoleum
Mausoleum
A mausoleum is an external free-standing building constructed as a monument enclosing the interment space or burial chamber of a deceased person or persons. A monument without the interment is a cenotaph. A mausoleum may be considered a type of tomb or the tomb may be considered to be within the...
or baptistery
Baptistery
In Christian architecture the baptistry or baptistery is the separate centrally-planned structure surrounding the baptismal font. The baptistry may be incorporated within the body of a church or cathedral and be provided with an altar as a chapel...
. Normally there will be a higher central dome over the central space.

The Basilica of San Lorenzo, Milan
Basilica of San Lorenzo, Milan
The Basilica of Saint Lawrence is a church in Milan, northern Italy, dedicated to the Christian martyr St. Lawrence.- History :Various suggestions of its origin have been made, including a foundation in c.370., the Basilica of San Lorenzo was renovated and redecorated in the 16th century...
(370) is possibly the first example of a grander type, the "aisled tetraconch", with an outer ambulatory. In middle Byzantine architecture, the cross-in-square
Cross-in-square
The term cross-in-square or crossed-dome denotes the dominant architectural form of middle- and late-period Byzantine churches. The first cross-in-square churches were probably built in the late 8th century, and the form has remained in use throughout the Orthodox world until the present day...
plan was developed, essentially filling out the tetraconch to form a square-ish exterior. Either of these types may also be described less precisely as "cross-domed". In these types the semi-dome
Semi-dome
A semi-dome, also called a "half-dome", is the term in architecture for half a dome , used to cover a semi-circular area. Similar structures occur in nature.-Architecture:...
of the apse usually starts directly from the central domed space. 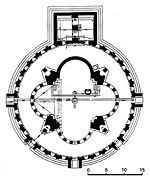 The ruined Ninotsminda Cathedral
Ninotsminda Cathedral
Ninotsminda Cathedral is located in the village of Sagarejo, in the Kakheti region, Georgia.Ninotsminda Cathedral is highly significant to the development of Georgian architecture, as it predates Jvari Monastery in Mtskheta, and served as a model for the development of the later tetraconch form...
of c.575 in Georgia is perhaps the oldest example in that country. The Armenian and Georgian examples are later than some others but a distinctive and sophisticated form of the plan. They are similar to the cross-in-square plan, but in Georgia the corner spaces, or "angle chambers", are only accessible from the central space through narrow openings, and are closed off from the apses (as at Jvari monastery
Jvari (monastery)
Jvari or Jvari Monastery is a Georgian Orthodox monastery of the 6th century near Mtskheta , Mtskheta-Mtianeti region, eastern Georgia. The name is translated as the Monastery of the Cross...
, see plan above). In Armenia, the plan also developed in the 6th century, where the plan of St. Hripsime Church, Echmiadzin
St. Hripsime Church, Echmiadzin
Saint Hripsimé Church is one of the oldest surviving churches in Armenia. The church was erected by Catholicos Komitas atop the original mausoleum built by Catholicos Sahak the Great in the year 395 AD that contained the remains of the martyred Saint Hripsimé to whom the church was dedicated. The...
(618) is almost identical to Jvari. Later a different plan was developed, with a tetraconch main space completely encircled by an aisle
Aisle
An aisle is, in general, a space for walking with rows of seats on both sides or with rows of seats on one side and a wall on the other...
, or ambulatory
Ambulatory
The ambulatory is the covered passage around a cloister. The term is sometimes applied to the procession way around the east end of a cathedral or large church and behind the high altar....
in the terminology used for Western churches, as at the ruined mid-7th century Zvartnots Cathedral
Zvartnots Cathedral
Zvartnots Cathedral are the ruins of a seventh century centrally-planned aisled tetraconch type Armenian cathedral built by order of the Catholicos Nerses the Builder from 641-653...
. The ruined so-called Cathedral of Bosra
Bosra
Bosra , also known as Bostra, Busrana, Bozrah, Bozra, Busra Eski Şam, Busra ash-Sham, and Nova Trajana Bostra, is an ancient city administratively belonging to the Daraa Governorate in southern Syria...
, of the early 6th century, is the earliest major Syrian tetraconch church, though in Syria the type did not remain as popular as in the Caucasus.

The Mausoleum of Galla Placidia
Mausoleum of Galla Placidia
The Mausoleum of Galla Placidia is a Roman building in Ravenna, Italy. It was listed with seven other structures in Ravenna in the World Heritage List in 1996...
in Ravenna
Ravenna
Ravenna is the capital city of the Province of Ravenna in the Emilia-Romagna region of Italy and the second largest comune in Italy by land area, although, at , it is little more than half the size of the largest comune, Rome...
(425-30), world-famous for its mosaic
Mosaic
Mosaic is the art of creating images with an assemblage of small pieces of colored glass, stone, or other materials. It may be a technique of decorative art, an aspect of interior decoration, or of cultural and spiritual significance as in a cathedral...
s, is almost a tetraconch, although there are short vaulted arms leading from the central space to each apse-end. These end in a flat wall with no semi-dome, and the entrance end is slightly longer.
A famous revival of the tetraconch formula in the West is Bramante's first design for the Basilica of St. Peter, Rome.

A triconch building has only three apses; normally omitting the one at the liturgical west end, which may be replaced with a narthex
Narthex
The narthex of a church is the entrance or lobby area, located at the end of the nave, at the far end from the church's main altar. Traditionally the narthex was a part of the church building, but was not considered part of the church proper...
. Many churches of both types have been extended, especially to the west by addition of naves, so that they came to resemble more conventional basilica
Basilica
The Latin word basilica , was originally used to describe a Roman public building, usually located in the forum of a Roman town. Public basilicas began to appear in Hellenistic cities in the 2nd century BC.The term was also applied to buildings used for religious purposes...
-type churches. The church in Istanbul
Istanbul
Istanbul , historically known as Byzantium and Constantinople , is the largest city of Turkey. Istanbul metropolitan province had 13.26 million people living in it as of December, 2010, which is 18% of Turkey's population and the 3rd largest metropolitan area in Europe after London and...
of St. Mary of the Mongols
Church of St. Mary of the Mongols
Saint Mary of the Mongols Saint Mary of the Mongols Saint Mary of the Mongols (full name in Greek: Θεοτòκος Παναγιώτισσα (pr. Theotokos Panaghiótissa, lit. "All-Holy Theotokos") or Παναγία Μουχλιώτισσα (pr. Panaghia Muchliótissa); Turkish name: Kanlı Kilise (meaning:Bloody Church), is an Eastern...
is an example.