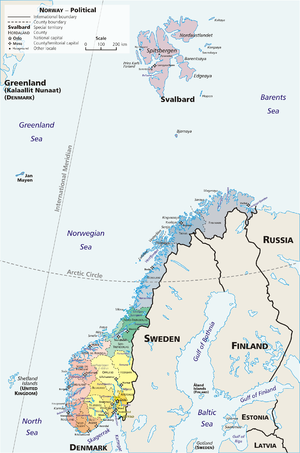 Norway
Norway
Norway , officially the Kingdom of Norway, is a Nordic unitary constitutional monarchy whose territory comprises the western portion of the Scandinavian Peninsula, Jan Mayen, and the Arctic archipelago of Svalbard and Bouvet Island. Norway has a total area of and a population of about 4.9 million...
is divided into 19 administrative regions, called counties
County
A county is a jurisdiction of local government in certain modern nations. Historically in mainland Europe, the original French term, comté, and its equivalents in other languages denoted a jurisdiction under the sovereignty of a count A county is a jurisdiction of local government in certain...
(singular , plural (Bokmål
Bokmål
Bokmål is one of two official Norwegian written standard languages, the other being Nynorsk. Bokmål is used by 85–90% of the population in Norway, and is the standard most commonly taught to foreign students of the Norwegian language....
) / fylke (Nynorsk
Nynorsk
Nynorsk or New Norwegian is one of two official written standards for the Norwegian language, the other being Bokmål. The standard language was created by Ivar Aasen during the mid-19th century, to provide a Norwegian alternative to the Danish language which was commonly written in Norway at the...
); until 1918 known as amt, pl. amter / amt). The counties form the primary first-level subdivisions of Norway and are further divided into 430 municipalities
Municipalities of Norway
Norway is divided into 19 administrative regions, called counties , and 430 municipalities...
(kommune, pl. kommuner / kommunar). The capital Oslo
Oslo
Oslo is a municipality, as well as the capital and most populous city in Norway. As a municipality , it was established on 1 January 1838. Founded around 1048 by King Harald III of Norway, the city was largely destroyed by fire in 1624. The city was moved under the reign of Denmark–Norway's King...
is considered as both a county and a municipality.

There is some political disagreement on whether counties are a practical, economical or even necessary level of administration. See politics of Norway
Politics of Norway
Politics in Norway take place in the framework of a parliamentary representative democratic constitutional monarchy. Executive power is exercised by the King's council, the cabinet, led by the Prime Minister of Norway. Legislative power is vested in both the government and the Storting, elected...
for more information.

Below is a list of the Norwegian counties as they have been since 1919, with their current administrative centres. Note that the counties are administered both by appointees of the national government and to a lesser extent by their own elected bodies. The county numbers are from the official numbering system ISO 3166-2:NO
ISO 3166-2:NO
ISO 3166-2:NO is the entry for Norway in ISO 3166-2, part of the ISO 3166 standard published by the International Organization for Standardization , which defines codes for the names of the principal subdivisions of all countries coded in ISO 3166-1.Currently for Norway, ISO 3166-2 codes are...
, which follows the coastline from the Swedish border in the southeast to the Russian border in the northeast. The number 13
13 (number)
13 is the natural number after 12 and before 14. It is the smallest number with eight letters in its name spelled out in English. It is also the first of the teens – the numbers 13 through 19 – the ages of teenagers....
was dropped from the system when the city of Bergen (county no. 13) was merged into Hordaland (county no. 12) in 1972.

From the consolidation to a single kingdom, Norway
Norway
Norway , officially the Kingdom of Norway, is a Nordic unitary constitutional monarchy whose territory comprises the western portion of the Scandinavian Peninsula, Jan Mayen, and the Arctic archipelago of Svalbard and Bouvet Island. Norway has a total area of and a population of about 4.9 million...
was divided into a number of geographic regions that had its own legislative assembly or Thing
Thing (assembly)
A thing was the governing assembly in Germanic and introduced into some Celtic societies, made up of the free people of the community and presided by lawspeakers, meeting in a place called a thingstead...
, such as Gulating
Gulating
Gulaþing is both the name of one of the first Norwegian legislative assemblies or Þing and one of the present day law courts of western Norway.-History:...
(Western Norway) and Frostating
Frostating
Frostating was the site of an early Norwegian court. Frostating had its seat at Tinghaugen in Frosta municipality in the county of Nord-Trøndelag.-Tinghaugen:...
(Trøndelag
Trøndelag
Trøndelag is the name of a geographical region in the central part of Norway, consisting of the two counties Nord-Trøndelag and Sør-Trøndelag. The region is, together with Møre og Romsdal, part of a larger...
). The second-order subdivision of these regions was into fylker, such as Egdafylke
Agder
Agder is a historical district of Norway in the southernmost region of Norway, corresponding to the two counties Vest-Agder and Aust-Agder. Today, the term Sørlandet is more commonly used.-Name:...
and Hordafylke
Hordaland
is a county in Norway, bordering Sogn og Fjordane, Buskerud, Telemark and Rogaland. Hordaland is the third largest county after Akershus and Oslo by population. The county administration is located in Bergen...
. In 1914, the historical term fylke was brought into use again to replace the term amt introduced during the union
Kalmar Union
The Kalmar Union is a historiographical term meaning a series of personal unions that united the three kingdoms of Denmark, Norway , and Sweden under a single monarch, though intermittently and with a population...
with Denmark. Current day counties (fylker) often, but not necessarily, correspond to the historical areas.

Finnmark
Finnmark
or Finnmárku is a county in the extreme northeast of Norway. By land it borders Troms county to the west, Finland to the south and Russia to the east, and by water, the Norwegian Sea to the northwest, and the Barents Sea to the north and northeast.The county was formerly known as Finmarkens...
(including northern Troms
Troms
or Romsa is a county in North Norway, bordering Finnmark to the northeast and Nordland in the southwest. To the south is Norrbotten Län in Sweden and further southeast is a shorter border with Lapland Province in Finland. To the west is the Norwegian Sea...
), the Faroe Islands
Faroe Islands
The Faroe Islands are an island group situated between the Norwegian Sea and the North Atlantic Ocean, approximately halfway between Scotland and Iceland. The Faroe Islands are a self-governing territory within the Kingdom of Denmark, along with Denmark proper and Greenland...
, the Orkney Islands
Orkney Islands
Orkney also known as the Orkney Islands , is an archipelago in northern Scotland, situated north of the coast of Caithness...
, Shetland, the Hebrides
Hebrides
The Hebrides comprise a widespread and diverse archipelago off the west coast of Scotland. There are two main groups: the Inner and Outer Hebrides. These islands have a long history of occupation dating back to the Mesolithic and the culture of the residents has been affected by the successive...
, Isle of Man
Isle of Man
The Isle of Man , otherwise known simply as Mann , is a self-governing British Crown Dependency, located in the Irish Sea between the islands of Great Britain and Ireland, within the British Isles. The head of state is Queen Elizabeth II, who holds the title of Lord of Mann. The Lord of Mann is...
, Iceland
Iceland
Iceland , described as the Republic of Iceland, is a Nordic and European island country in the North Atlantic Ocean, on the Mid-Atlantic Ridge. Iceland also refers to the main island of the country, which contains almost all the population and almost all the land area. The country has a population...
and Greenland
Greenland
Greenland is an autonomous country within the Kingdom of Denmark, located between the Arctic and Atlantic Oceans, east of the Canadian Arctic Archipelago. Though physiographically a part of the continent of North America, Greenland has been politically and culturally associated with Europe for...
were Norwegian skattland ("tax countries"), and did not belong to any known counties or assembly areas.

From the end of the 12th century, Norway was divided into several syssel. The head of the various syssel was the syslemann, who represented the king locally. The following shows a reconstruction of the different syssel in Norway c. 1300, including sub-syssel where these seem established.

From 1308, the term len (plural len) in Norway
Norway
Norway , officially the Kingdom of Norway, is a Nordic unitary constitutional monarchy whose territory comprises the western portion of the Scandinavian Peninsula, Jan Mayen, and the Arctic archipelago of Svalbard and Bouvet Island. Norway has a total area of and a population of about 4.9 million...
signified an administrative region roughly equivalent to today's counties. The historic len was an important administrative entity during the period of Dano-Norwegian unification after their amalgamation
Political union
A political union is a type of state which is composed of or created out of smaller states. Unlike a personal union, the individual states share a common government and the union is recognized internationally as a single political entity...
as one state, which lasted for the period 1536–1814.

At the beginning of the 16th century the political divisions were variable, but consistently included four main len and approximately 30 smaller sub-regions with varying connections to a main len. Up to 1660 the four principal len were headquartered at the major fortresses Bohus Fortress
Bohus Fortress
Bohus Fortress lies along the old Norwegian - Swedish border in Kungälv, Bohuslän, Sweden, north east from Hisingen where the Göta river splits into two branches...
, Akershus Fortress
Akershus Fortress
Akershus Fortress or Akershus Castle is a medieval castle that was built to protect Oslo, the capital of Norway. It has also been used as a prison.- Construction :...
, Bergenhus Fortress
Bergenhus Fortress
Bergenhus fortress is a fortress located in Bergen, Norway. Bergenhus fortress is located in the entrance to the harbor in Bergen. This is one of the oldest and best preserved castles in Norway.-History:...
and the fortified city of Trondheim
Trondheim
Trondheim , historically, Nidaros and Trondhjem, is a city and municipality in Sør-Trøndelag county, Norway. With a population of 173,486, it is the third most populous municipality and city in the country, although the fourth largest metropolitan area. It is the administrative centre of...
. The sub-regions corresponded to the church districts for the Lutheran church in Norway.

These four principal len were in the 1530s divided into approximately 30 smaller regions. From that point forward through the beginning of the 17th century the number of subsidiary len was reduced, while the composition of the principal len became more stable.

From 1660 Norway had nine principal len comprising 17 subsidiary len:
Len written as län continues to be used as the administrative equivalent of county in Sweden to this day. Each len was governed by a lenman.

With the royal decree of February 19, 1662, each len was designated an amt (plural amt) and the lenmann was titled amtmann, from German Amt (office), reflecting the bias of the Danish court of that period.

After 1671 Norway was divided into four principal amt or stiftsamt and there were nine subordinate amt:

From 1730 Norway had the following amt:
At this time there were also two counties (grevskap) controlled by actual count
Count
A count or countess is an aristocratic nobleman in European countries. The word count came into English from the French comte, itself from Latin comes—in its accusative comitem—meaning "companion", and later "companion of the emperor, delegate of the emperor". The adjective form of the word is...
s, together forming what is now Vestfold
Vestfold
is a county in Norway, bordering Buskerud and Telemark. The county administration is in Tønsberg.Vestfold is located west of the Oslofjord, as the name indicates. It includes many smaller, but well-known towns in Norway, such as Larvik, Sandefjord, Tønsberg and Horten. The river Numedalslågen runs...
county:

In 1760 Norway had the following stiftamt and amt:

From 1919 each amt was renamed a fylke (plural fylker) (county) and the amtmann was now titled fylkesmann (county governor).