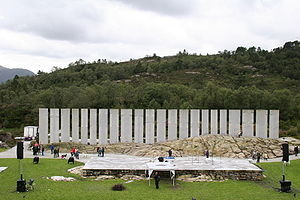 Gulaþing is both the name of one of the first Norwegian
Norway
Norway , officially the Kingdom of Norway, is a Nordic unitary constitutional monarchy whose territory comprises the western portion of the Scandinavian Peninsula, Jan Mayen, and the Arctic archipelago of Svalbard and Bouvet Island. Norway has a total area of and a population of about 4.9 million...
legislative assemblies or Þing
Thing (assembly)
A thing was the governing assembly in Germanic and introduced into some Celtic societies, made up of the free people of the community and presided by lawspeakers, meeting in a place called a thingstead...
and one of the present day law courts of western Norway.

Gulatinget was an annual parliamentary assembly which took place in Gulen
Gulen
is a municipality in the southwestern part of Sogn og Fjordane county, Norway. It is part of the traditional district of Sogn. The administrative center of the municipality is the village of Eivindvik...
from approx. 900-1300 AD and was one of the oldest and largest parliamentary assemblies in medieval Norway. Gulatinget Millennium Site is a symbol of the history of this Norwegian representative form of parliament, with traditions reaching over a thousand years back in time.

Initially farmers from Western Norway met at Gulen to discuss political matters, things like taxation, the building of roads and churches, military service and a number of other issues. The assembly also passed judgements in civil disputes and criminal cases. Special legislation, Gulatingslova, was drafted to aid the discussions. The legislation exists today in a handwritten manuscript from around 1250 but the text represents all the laws adopted and amended by the farmers at Gulatinget over several centuries.

The assembly site was established early in the tenth century and the original legislative area covered the regions of Hordaland
Hordaland
is a county in Norway, bordering Sogn og Fjordane, Buskerud, Telemark and Rogaland. Hordaland is the third largest county after Akershus and Oslo by population. The county administration is located in Bergen...
and Sogn og Fjordane
Sogn og Fjordane
is a county in Norway, bordering Møre og Romsdal, Oppland, Buskerud, and Hordaland. The county administration is in the town of Hermansverk in Leikanger municipality while the largest town is Førde....
. Initially Gulatinget was an allting or common assembly, where all free farmers had the right to participate. Snorre’s Chronicle of the Kings of Norway tells that Håkon the Good (935-61) took an active part in the parliamentary assemblies at Gulen, and under his rule the regions of Rogaland
Rogaland
is a county in Western Norway, bordering Hordaland, Telemark, Aust-Agder and Vest-Agder. It is the center of the Norwegian petroleum industry, and as a result of this, Rogaland has the lowest unemployment rate of any county in Norway, 1.1%...
, Agder
Agder
Agder is a historical district of Norway in the southernmost region of Norway, corresponding to the two counties Vest-Agder and Aust-Agder. Today, the term Sørlandet is more commonly used.-Name:...
and Sunnmøre
Sunnmøre
Sunnmøre is the southernmost traditional district of the western Norwegian county of Møre og Romsdal. Its main city is Ålesund. The region comprises the municipalities of Giske, Hareid, Herøy, Norddal, Sande, Skodje, Haram, Stordal, Stranda, Sula, Sykkylven, Ulstein, Vanylven, Volda, Ørskog,...
were brought into the area covered by Gulatinget, with Valdres
Valdres
Valdres is a traditional district in central, southern Norway, situated between Gudbrandsdal and Hallingdal.Administratively, Valdres belongs to Oppland. It consists of the municipalities Nord-Aurdal, Sør-Aurdal, Øystre Slidre, Vestre Slidre, Vang and Etnedal. The main town in the region is...
and Hallingdal
Hallingdal
Hallingdal is a valley and traditional district in Buskerud county in Norway. It consists of the municipalities of Flå, Nes, Gol, Hemsedal, Ål and Hol.-History:Ancient routes went to Vestlandet through Valdres and Hallingdal and down Røldal to Odda...
being incorporated later too.

The practice of periodic regional assemblies of leading men predates recorded history, and was firmly established at the time of the unification of Norway into a single kingdom
Monarchy
A monarchy is a form of government in which the office of head of state is usually held until death or abdication and is often hereditary and includes a royal house. In some cases, the monarch is elected...
(900
900
Year 900 was a leap year starting on Tuesday of the Julian calendar.- Asia :* April 21 – Namwaran and his children, Lady Angkatan and Bukah, are granted pardon by the Datu of Tondo, as represented Jayadewa, Lord Minister of Pila, which released them of all their debts as inscribed in the...
- 1030 AD). These assemblies or Lagting
Lagting
Lagting, literally "Law Ting", can refer to:*Lagting, the Parliament of Åland*Lagting, the former quasi-upper house of the parliament of Norway *Løgting, the parliament of the Faroe Islands...
, functioned as judicial and legislative bodies, resolving disputes and establishing laws. The Gulating (Old Norse
Old Norse
Old Norse is a North Germanic language that was spoken by inhabitants of Scandinavia and inhabitants of their overseas settlements during the Viking Age, until about 1300....
Gulaþing), held in Gulen
Gulen
is a municipality in the southwestern part of Sogn og Fjordane county, Norway. It is part of the traditional district of Sogn. The administrative center of the municipality is the village of Eivindvik...
north of Bergen
Bergen
Bergen is the second largest city in Norway with a population of as of , . Bergen is the administrative centre of Hordaland county. Greater Bergen or Bergen Metropolitan Area as defined by Statistics Norway, has a population of as of , ....
on the west coast of Norway, received delegates from Lyngør
Lyngør
Lyngør is a village area on a group of small islands in the municipality of Tvedestrand in Aust-Agder county, off the southeast coast of Norway...
in the south to north of Ålesund
Ålesund
is a town and municipality in Møre og Romsdal county, Norway. It is part of the traditional district of Sunnmøre, and the center of the Ålesund Region. It is a sea port, and is noted for its unique concentration of Art Nouveau architecture....
, and its laws were observed from the eastern inland valleys of Valdres
Valdres
Valdres is a traditional district in central, southern Norway, situated between Gudbrandsdal and Hallingdal.Administratively, Valdres belongs to Oppland. It consists of the municipalities Nord-Aurdal, Sør-Aurdal, Øystre Slidre, Vestre Slidre, Vang and Etnedal. The main town in the region is...
and Hallingdal
Hallingdal
Hallingdal is a valley and traditional district in Buskerud county in Norway. It consists of the municipalities of Flå, Nes, Gol, Hemsedal, Ål and Hol.-History:Ancient routes went to Vestlandet through Valdres and Hallingdal and down Røldal to Odda...
to the Faroe Islands
Faroe Islands
The Faroe Islands are an island group situated between the Norwegian Sea and the North Atlantic Ocean, approximately halfway between Scotland and Iceland. The Faroe Islands are a self-governing territory within the Kingdom of Denmark, along with Denmark proper and Greenland...
in the west.

The Gulating served as the model for the establishment of the legislative assemblies of Iceland
Iceland
Iceland , described as the Republic of Iceland, is a Nordic and European island country in the North Atlantic Ocean, on the Mid-Atlantic Ridge. Iceland also refers to the main island of the country, which contains almost all the population and almost all the land area. The country has a population...
, the Althing
Althing
The Alþingi, anglicised variously as Althing or Althingi, is the national parliament of Iceland. The Althingi is the oldest parliamentary institution in the world still extant...
, and of the Faeroe Islands, the Løgting
Løgting
Løgting is the unicameral parliament of the Faroe Islands, a self-ruling dependency of Denmark.The name literally means "Law Thing" - that is, a law assembly - and derives from Old Norse lǫgþing, which was a name given to ancient assemblies. A ting or Þing has existed on the Faroe Islands for over...
, areas settled by people from western Norway. A fairly complete manuscript
Manuscript
A manuscript or handwrite is written information that has been manually created by someone or some people, such as a hand-written letter, as opposed to being printed or reproduced some other way...
of the Gulating laws (Gulatingsloven) from the middle of the 13th century is preserved in Codex Ranzovianus at the University of Copenhagen
University of Copenhagen
The University of Copenhagen is the oldest and largest university and research institution in Denmark. Founded in 1479, it has more than 37,000 students, the majority of whom are female , and more than 7,000 employees. The university has several campuses located in and around Copenhagen, with the...
.

While the Gulating
Thing (assembly)
A thing was the governing assembly in Germanic and introduced into some Celtic societies, made up of the free people of the community and presided by lawspeakers, meeting in a place called a thingstead...
was not a democratic assembly in the modern sense of an elected body, it effectively represented the interests of a large number of people rather than a small elite. The laws were typically crafted as social contract
Social contract
The social contract is an intellectual device intended to explain the appropriate relationship between individuals and their governments. Social contract arguments assert that individuals unite into political societies by a process of mutual consent, agreeing to abide by common rules and accept...
s. §35 for instance states, "None of us shall take goods from others, or take the law into our own hands" (Robbestad, 1969). The laws nevertheless applied for every person inside the "law area" Gulaþingslǫg. If a stranger stole from a Gulatingsman, that was also in breach of the laws, but the law set no limits to how he could be punished.

Gulating, along with Norway three other ancient regional assemblies, Borgarting, Eidsivating
Eidsivating
Eidsivating was the name of one of the original Norwegian popular assemblies or Tings. Historically it was the site of court and assembly for eastern parts of Norway....
, and Frostating
Frostating
Frostating was the site of an early Norwegian court. Frostating had its seat at Tinghaugen in Frosta municipality in the county of Nord-Trøndelag.-Tinghaugen:...
, were joined into a single jurisdiction
Jurisdiction
Jurisdiction is the practical authority granted to a formally constituted legal body or to a political leader to deal with and make pronouncements on legal matters and, by implication, to administer justice within a defined area of responsibility...
during the late Viking
Viking
The term Viking is customarily used to refer to the Norse explorers, warriors, merchants, and pirates who raided, traded, explored and settled in wide areas of Europe, Asia and the North Atlantic islands from the late 8th to the mid-11th century.These Norsemen used their famed longships to...
era, and King Magnus Lagabøte
Magnus VI of Norway
Magnus VI Lagabøte or Magnus Håkonsson , was king of Norway from 1263 until 1280.-Early life:...
had the existing body of law put into writing (1263 - 1280). They provided the institutional and legal framework for subsequent legislative and judicial bodies, and remain in operation today as superior regional courts.

Violence was dealt with by fines, which were imposed not only on the murderer, but also on his relatives -- a practice that distinguishes Old Norse
Old Norse
Old Norse is a North Germanic language that was spoken by inhabitants of Scandinavia and inhabitants of their overseas settlements during the Viking Age, until about 1300....
law from the Roman
Roman law
Roman law is the legal system of ancient Rome, and the legal developments which occurred before the 7th century AD — when the Roman–Byzantine state adopted Greek as the language of government. The development of Roman law comprises more than a thousand years of jurisprudence — from the Twelve...
practice of holding only the individual responsible. Homicide of an heir to a property, according to Gulating law §218-228, is punished by a collective fee of 189 cattle, where each responsible party's share is spelled out in detail. If we assume a fair price of $2,000 per bull or cow, that translates into modern money approximately as follows:


More remote relatives were fined from $300 to $8,800. Murder was expensive, and so was personal physical injury. The cost to the convicted party's extended family of chopping off another's arm or a leg, for instance, was fixed at the equivalent of $186,000; a thumb, $19,200.