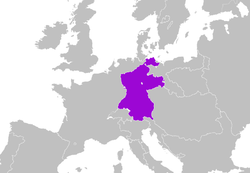 The Principality of Erfurt (Fürstentum Erfurt) existed from 1806 to 1814 and included Erfurt
Erfurt
Erfurt is the capital city of Thuringia and the main city nearest to the geographical centre of Germany, located 100 km SW of Leipzig, 150 km N of Nuremberg and 180 km SE of Hannover. Erfurt Airport can be reached by plane via Munich. It lies in the southern part of the Thuringian...
and the surrounding land, including the Grafschaft
Grafschaft
Grafschaft can refer to:* a German term for county, in a sense that it is an area which belonged to a count . However, administrative districts without a count, which would also be called counties in English-speaking countries, are not called Grafschaft in German.**List of states in the Holy Roman...
Blankenhain
Blankenhain
Blankenhain is a town in the Weimarer Land district, in Thuringia, Germany. It is situated 14 km south of Weimar....
. It was subordinate directly to the Emperor of the French
Emperor of the French
The Emperor of the French was the title used by the Bonaparte Dynasty starting when Napoleon Bonaparte was given the title Emperor on 18 May 1804 by the French Senate and was crowned emperor of the French on 02 December 1804 at the cathedral of Notre Dame de Paris, in Paris with the Crown of...
.

The Principality of Erfurt became subordinate to Napoleon I
Napoleon I
Napoleon Bonaparte was a French military and political leader during the latter stages of the French Revolution.As Napoleon I, he was Emperor of the French from 1804 to 1815...
as imperial state domain (domaine réservé à l'empereur), along with the Grafschaft Blankenhain, after the defeat of Prussia
Prussia
Prussia was a German kingdom and historic state originating out of the Duchy of Prussia and the Margraviate of Brandenburg. For centuries, the House of Hohenzollern ruled Prussia, successfully expanding its size by way of an unusually well-organized and effective army. Prussia shaped the history...
in the Battle of Jena and Auerstedt, while the surrounding Thuringia
Thuringia
The Free State of Thuringia is a state of Germany, located in the central part of the country.It has an area of and 2.29 million inhabitants, making it the sixth smallest by area and the fifth smallest by population of Germany's sixteen states....
n states joined the Confederation of the Rhine
Confederation of the Rhine
The Confederation of the Rhine was a confederation of client states of the First French Empire. It was formed initially from 16 German states by Napoleon after he defeated Austria's Francis II and Russia's Alexander I in the Battle of Austerlitz. The Treaty of Pressburg, in effect, led to the...
.
The source of this article is wikipedia, the free encyclopedia.  The text of this article is licensed under the GFDL.