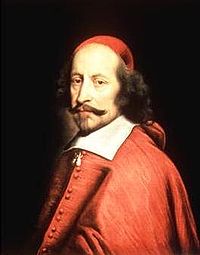 The League of the Rhine (also known as the Erste Rheinbund, First Rhine-Bund
Bund
- Organizations :* German American Bund, a pro-Nazi pre-World War II organisation* General Jewish Labour Bund in Lithuania, Poland and Russia, a political party founded in the Russian Empire* General Jewish Labour Bund in Poland, a political party founded in Poland...
; or the Rheinische Allianz - Rhenish Alliance) was a defensive union of more than 50 German princes
Fürst
Fürst is a German title of nobility, usually translated into English as Prince.The term refers to the head of a principality and is distinguished from the son of a monarch, who is referred to as Prinz...
and their cities along the River Rhine, formed in 14 August 1658 by Louis XIV of France
Louis XIV of France
Louis XIV , known as Louis the Great or the Sun King , was a Bourbon monarch who ruled as King of France and Navarre. His reign, from 1643 to his death in 1715, began at the age of four and lasted seventy-two years, three months, and eighteen days...
and negotiated by Cardinal Mazarin (then de facto prime minister of France), Hugues de Lionne
Hugues de Lionne
Hugues de Lionne was a French statesman.He was born in Grenoble, of an old family of Dauphiné. Early trained for diplomacy, he fell into disgrace under Cardinal Richelieu, but his remarkable abilities attracted the notice of Cardinal Mazarin, who sent him as secretary of the French embassy to the...
and Johann Philipp von Schönborn
Johann Philipp von Schönborn
Johann Philipp von Schönborn was the Archbishop-Elector of Mainz from 1647 until 1673, the Bishop of Würzburg from 1642 until 1673, and the Bishop of Worms from 1663 until 1673....
(Elector of Mainz and Chancellor of the Empire).

Its intended aim was to weaken the position of the Holy Roman Emperor
Holy Roman Emperor
The Holy Roman Emperor is a term used by historians to denote a medieval ruler who, as German King, had also received the title of "Emperor of the Romans" from the Pope...
(at that time, Ferdinand III
Ferdinand III, Holy Roman Emperor
Ferdinand III was Holy Roman Emperor from 15 February 1637 until his death, as well as King of Hungary and Croatia, King of Bohemia and Archduke of Austria.-Life:...
) and to marginalise the Austrian house of Habsburg. Louis XIV had wished to be elected Emperor himself, but had failed, despite the French victory at the Battle of the Dunes
Battle of the Dunes (1658)
The Battle of the Dunes, fought on 14 June , 1658, is also known as the Battle of Dunkirk. It was a victory of the French army, under Turenne, against the Spanish army, led by John of Austria the Younger and Louis II de Condé...
. The new confederation allied itself to France
Kingdom of France
The Kingdom of France was one of the most powerful states to exist in Europe during the second millennium.It originated from the Western portion of the Frankish empire, and consolidated significant power and influence over the next thousand years. Louis XIV, also known as the Sun King, developed a...
, swearing not to let any anti-French troops (marching to attack France in the Spanish Netherlands or elsewhere) pass through their territory, thus protecting France's eastern frontier with a "military border" running along the Rhine and cutting Austria
Austria
Austria , officially the Republic of Austria , is a landlocked country of roughly 8.4 million people in Central Europe. It is bordered by the Czech Republic and Germany to the north, Slovakia and Hungary to the east, Slovenia and Italy to the south, and Switzerland and Liechtenstein to the...
off from the Spanish Netherlands. Sweden was guaranteed its German possessions in Bremen-Verden
Bremen-Verden
Bremen-Verden, formally the Duchies of Bremen and Verden , were two territories and immediate fiefs of the Holy Roman Empire, which emerged and gained Imperial immediacy in 1180...
, and later also those in Swedish Pomerania
Swedish Pomerania
Swedish Pomerania was a Dominion under the Swedish Crown from 1630 to 1815, situated on what is now the Baltic coast of Germany and Poland. Following the Polish War and the Thirty Years' War, Sweden held extensive control over the lands on the southern Baltic coast, including Pomerania and parts...
. The League's members also swore to maintain the clauses of the 1648 treaty of Westphalia
Peace of Westphalia
The Peace of Westphalia was a series of peace treaties signed between May and October of 1648 in Osnabrück and Münster. These treaties ended the Thirty Years' War in the Holy Roman Empire, and the Eighty Years' War between Spain and the Dutch Republic, with Spain formally recognizing the...
, the treaty which had made the League possible by authorising the German princes, immediate vassals of the Emperor, to conclude alliances between themselves or with foreign states.

The League fielded a force of 6000 to fight on the side of France and the Empire against the Ottomans
Ottoman wars in Europe
The wars of the Ottoman Empire in Europe are also sometimes referred to as the Ottoman Wars or as Turkish Wars, particularly in older, European texts.- Rise :...
, seeing action in the 1664 Battle of Saint Gotthard.