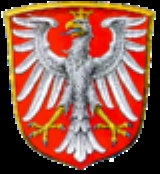 Encyclopedia
The Grand Duchy of Frankfurt was a German satellite state
Satellite state
A satellite state is a political term that refers to a country that is formally independent, but under heavy political and economic influence or control by another country...
of Napoleonic creation. It came into existence in 1810 through the combination of the former territories of the Archbishops of Mainz
Archbishopric of Mainz
The Archbishopric of Mainz or Electorate of Mainz was an influential ecclesiastic and secular prince-bishopric in the Holy Roman Empire between 780–82 and 1802. In the Roman Catholic Church hierarchy, the Archbishop of Mainz was the primas Germaniae, the substitute of the Pope north of the Alps...
along with the Free Imperial City of Frankfurt
Free City of Frankfurt
For almost five centuries, the German city of Frankfurt am Main was a city-state within two major Germanic states:*The Holy Roman Empire as the Free Imperial City of Frankfurt...
itself.

Although the grand duchy was named after the city of Frankfurt, Dalberg resided in the city of Aschaffenburg
Aschaffenburg
Aschaffenburg is a city in northwest Bavaria, Germany. The town of Aschaffenburg is not considered part of the district of Aschaffenburg, but is the administrative seat.Aschaffenburg is known as the Tor zum Spessart or "gate to the Spessart"...
. However, the territory was actually ruled by French commissioners. By the constitution of the grand duchy, upon Dalberg's death, the state would be inherited by Napoleon
Napoleon I
Napoleon Bonaparte was a French military and political leader during the latter stages of the French Revolution.As Napoleon I, he was Emperor of the French from 1804 to 1815...
's stepson, Eugène de Beauharnais
Eugène de Beauharnais
Eugène Rose de Beauharnais, Prince Français, Prince of Venice, Viceroy of the Kingdom of Italy, Hereditary Grand Duke of Frankfurt, 1st Duke of Leuchtenberg and 1st Prince of Eichstätt ad personam was the first child and only son of Alexandre, Vicomte de Beauharnais and Joséphine Tascher de la...
.

Dalberg abdicated
Abdication
Abdication occurs when a monarch, such as a king or emperor, renounces his office.-Terminology:The word abdication comes derives from the Latin abdicatio. meaning to disown or renounce...
in favour of Eugene on 26 October 1813, following Napoleon's defeat at the Battle of Leipzig
Battle of Leipzig
The Battle of Leipzig or Battle of the Nations, on 16–19 October 1813, was fought by the coalition armies of Russia, Prussia, Austria and Sweden against the French army of Napoleon. Napoleon's army also contained Polish and Italian troops as well as Germans from the Confederation of the Rhine...
. The grand duchy ceased to exist after December 1813, when the city was occupied by allied troops. While Frankfurt itself once again became a free city, most of the territory of the grand duchy was ultimately annexed by the Kingdom of Bavaria.
The source of this article is wikipedia, the free encyclopedia.  The text of this article is licensed under the GFDL.