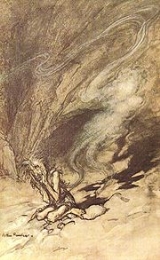 Encyclopedia
A cloak of invisibility
Invisibility
Invisibility is the state of an object that cannot be seen. An object in this state is said to be invisible . The term is usually used as a fantasy/science fiction term, where objects are literally made unseeable by magical or technological means; however, its effects can also be seen in the real...
is a theme that has occurred in fiction
Fiction
Fiction is the form of any narrative or informative work that deals, in part or in whole, with information or events that are not factual, but rather, imaginary—that is, invented by the author. Although fiction describes a major branch of literary work, it may also refer to theatrical,...
, and is a device which is under some scientific
Science
Science is a systematic enterprise that builds and organizes knowledge in the form of testable explanations and predictions about the universe...
inquiry.


Cloaks of invisibility in fiction

Edgar Rice Burroughs
Edgar Rice Burroughs
Edgar Rice Burroughs was an American author, best known for his creation of the jungle hero Tarzan and the heroic Mars adventurer John Carter, although he produced works in many genres.-Biography:...
uses the idea of an invisibility cloak in his 1931 novel A Fighting Man of Mars
A Fighting Man of Mars
A Fighting Man of Mars is an Edgar Rice Burroughs science fiction novel, the seventh of his famous Barsoom series. Burroughs began writing it on February 28, 1929, and the finished story was first published in Blue Book Magazine as a six-part serial in the issues for April to September, 1930...
. The movie, Erik the Viking
Erik the Viking
Erik the Viking is a 1989 feature film written and directed by Terry Jones. The film was inspired by Jones's children's book The Saga of Erik the Viking , but the plot is completely different. Jones also appears in the film as King Arnulf....
humorously depicts the title character using a cloak of invisibility, which he does not realize apparently works only on elderly men. In the Lord of the Rings, Frodo's elven cloak camouflaged him so that the enemy could see "nothing more than a boulder where the Hobbit
Hobbit
Hobbits are a fictional diminutive race who inhabit the lands of Middle-earth in J. R. R. Tolkien's fiction.Hobbits first appeared in the novel The Hobbit, in which the main protagonist, Bilbo Baggins, is the titular hobbit...
s were"; this magical item was used in the Dungeons & Dragons
Dungeons & Dragons
Dungeons & Dragons is a fantasy role-playing game originally designed by Gary Gygax and Dave Arneson, and first published in 1974 by Tactical Studies Rules, Inc. . The game has been published by Wizards of the Coast since 1997...
game.

Camouflaging cloaks form a central plot element in Samuel R. Delany
Samuel R. Delany
Samuel Ray Delany, Jr., also known as "Chip" is an American author, professor and literary critic. His work includes a number of novels, many in the science fiction genre, as well as memoir, criticism, and essays on sexuality and society.His science fiction novels include Babel-17, The Einstein...
's 1975 novel Dhalgren
Dhalgren
Dhalgren is a science fiction novel by Samuel R. Delany. The story begins with a cryptic passage:to wound the autumnal city.So howled out for the world to give him a name.The in-dark answered with wind....
and the Harry Potter
Harry Potter
Harry Potter is a series of seven fantasy novels written by the British author J. K. Rowling. The books chronicle the adventures of the adolescent wizard Harry Potter and his best friends Ron Weasley and Hermione Granger, all of whom are students at Hogwarts School of Witchcraft and Wizardry...
series of novels by J.K. Rowling. Harry uses the cloak to sneak into forbidden areas of the school.
More recently, cloaking devices have been used in videogames, for example Battlefield Heroes
Battlefield Heroes
Battlefield Heroes is a cartoon-style action video game developed by DICE initially—now developed by —and published by EA for Microsoft Windows. It is played from a third-person EA are calling it FPS perspective. The game is less demanding on computer specifications than the previous games of the...
and Team Fortress 2
Team Fortress 2
Team Fortress 2 is a free-to-play team-based first-person shooter multiplayer video game developed by Valve Corporation. A sequel to the original mod Team Fortress based on the Quake engine, it was first released as part of the video game compilation The Orange Box on October 10, 2007 for Windows...
, where they aid stealth-based characters. Also, Crossfire
Crossfire
A crossfire is a military term for the siting of weapons so that their arcs of fire overlap. This tactic came to prominence in World War I....
has a game mode (appropriately called Ghost Mode) with the Black List Terrorists cloaked, and using stealth to detonate specific targets.
The cloaking device
Cloaking device
Cloaking devices are advanced stealth technologies still in development that will cause objects, such as spaceships or individuals, to be partially or wholly invisible to parts of the electromagnetic spectrum...
s appearing in Star Wars
Star Wars
Star Wars is an American epic space opera film series created by George Lucas. The first film in the series was originally released on May 25, 1977, under the title Star Wars, by 20th Century Fox, and became a worldwide pop culture phenomenon, followed by two sequels, released at three-year...
, Star Trek
Star Trek
Star Trek is an American science fiction entertainment franchise created by Gene Roddenberry. The core of Star Trek is its six television series: The Original Series, The Animated Series, The Next Generation, Deep Space Nine, Voyager, and Enterprise...
and Stargate
Stargate
Stargate is a adventure military science fiction franchise, initially conceived by Roland Emmerich and Dean Devlin. The first film in the franchise was simply titled Stargate. It was originally released on October 28, 1994, by Metro-Goldwyn-Mayer and Carolco, and became a hit, grossing nearly...
, present a similar notion in a science fiction
Science fiction
Science fiction is a genre of fiction dealing with imaginary but more or less plausible content such as future settings, futuristic science and technology, space travel, aliens, and paranormal abilities...
form, but are generally used to hide larger scale objects, such as space ships. In science fiction cloaking, there is generally presented an assumed quasi-scientific, in-universe basis for the concept of achieving invisibility. Conversely, invisibility and cloaking is commonly presented in the science fantasy
Science fantasy
Science fantasy is a mixed genre within speculative fiction drawing elements from both science fiction and fantasy. Although in some terms of its portrayal in recent media products it can be defined as instead of being a mixed genre of science fiction and fantasy it is instead a mixing of the...
genre as a magical phenomenon, rather than in forms that rely on pure science.


Cloaks of invisibility in science

On October 19, 2006, a cloak was produced that routed microwaves of a particular frequency around a copper
Copper
Copper is a chemical element with the symbol Cu and atomic number 29. It is a ductile metal with very high thermal and electrical conductivity. Pure copper is soft and malleable; an exposed surface has a reddish-orange tarnish...
cylinder in a way that made them emerge almost as if there were nothing there. The cloak was made from metamaterials. It cast a small shadow, which the designers hope to fix.

The device obscures a defined two dimensional region and only at a particular microwave frequency. Work on achieving similar results with visible light is in progress. Other types of invisibility cloak are also possible, including ones that cloak events rather than objects.

However, cloaking a human-sized object at visible wavelengths appears to have low probability. Indeed, there appears to be a fundamental problem with these devices as "invisibility cloaks":

On the other hand, a group of researchers connected with Berkeley Lab and the University of California, Berkeley believe that cloaking at optical frequencies is indeed possible. Furthermore, it appears within reach. Their solution to the hurdles presented by cloaking issues are dielectrics. These nonconducting materials (dielectrics) are used for a carpet cloak, which serves as an optical cloaking device. According to the lead investigator:

Problems of refraction and opacity

Janos Perczel, 22, an undergraduate student at St Andrews University in Fife, has developed an optical sphere which could be used to create an "invisibility cloak". He said that by slowing down light by way of an optical illusion, the light can then be bent around an object to "conceal" it. Attempts have already been made to create invisibility cloaks but research shows that efforts are limited because any cloak would only work within certain backgrounds. But by slowing down the rays of light, Mr Perczel says the cloak wearer can move around ever-changing backgrounds.

Mr Perczel, from Hungary, came up with the idea under the guidance of "invisibility expert" Professor Ulf Leonhardt, who teaches at the university's school of physics and astronomy. The student recognised the potential of the invisible sphere and spent eight months fine tuning his project. The key development lies in the ability of the sphere, an optical device, to not only remain invisible itself but to slow light.

According to Prof Leonhardt, all optical illusions can slow down rays of light and the sphere can be used to bend this illusion around an object, reflecting off it and making it appear to be invisible. Mr Perczel added: "When the light is bent it engulfs the object, much like water covering a rock sitting in a river bed, and carries on its path, making it seem as if nothing is there. Light however can only be sped up to a speed faster than it would travel in space, under certain conditions, and this restricts invisibility cloaks to work in a limited part of the spectrum, essentially just one colour. This would be ideal if somebody was planning to stand still in camouflage. However, the moment they start to move, the scenery would begin to distort, revealing the person under the cloak. By slowing all of the light down with an invisible sphere, it does not need to be accelerated to such high speeds and can therefore work in all parts of the spectrum."