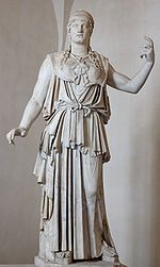 
In Greek mythology
Greek mythology
Greek mythology is the body of myths and legends belonging to the ancient Greeks, concerning their gods and heroes, the nature of the world, and the origins and significance of their own cult and ritual practices. They were a part of religion in ancient Greece...
, Athena, Athenê, or Athene (icon or ə; Attic
Attic Greek
Attic Greek is the prestige dialect of Ancient Greek that was spoken in Attica, which includes Athens. Of the ancient dialects, it is the most similar to later Greek, and is the standard form of the language studied in courses of "Ancient Greek". It is sometimes included in Ionic.- Origin and range...
: , Athēnā or , Athēnaia; Epic: , Athēnaiē; Ionic
Ionic Greek
Ionic Greek was a subdialect of the Attic–Ionic dialect group of Ancient Greek .-History:Ionic dialect appears to have spread originally from the Greek mainland across the Aegean at the time of the Dorian invasions, around the 11th Century B.C.By the end of the Greek Dark Ages in the 5th Century...
: , Athēnē; Doric
Doric Greek
Doric or Dorian was a dialect of ancient Greek. Its variants were spoken in the southern and eastern Peloponnese, Crete, Rhodes, some islands in the southern Aegean Sea, some cities on the coasts of Asia Minor, Southern Italy, Sicily, Epirus and Macedon. Together with Northwest Greek, it forms the...
: , Athana), also referred to as Pallas Athena/Athene (icon; Παλλὰς Ἀθηνᾶ; Παλλὰς Ἀθήνη), is the goddess of wisdom, courage, inspiration, civilization, warfare, strength, strategy, the arts, crafts, justice, and skill.

What are the attributes and their signification of Athena?

how was the economic in Athena , politics and how was they treating the women
More
x