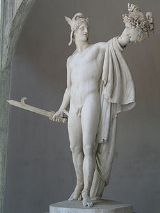 Overview
Perseus the legendary
Legend
A legend is a narrative of human actions that are perceived both by teller and listeners to take place within human history and to possess certain qualities that give the tale verisimilitude...
founder of Mycenae
Mycenae
Mycenae is an archaeological site in Greece, located about 90 km south-west of Athens, in the north-eastern Peloponnese. Argos is 11 km to the south; Corinth, 48 km to the north...
and of the Perseid dynasty of Danaans there, was the first of the mythic heroes of Greek mythology
Greek mythology
Greek mythology is the body of myths and legends belonging to the ancient Greeks, concerning their gods and heroes, the nature of the world, and the origins and significance of their own cult and ritual practices. They were a part of religion in ancient Greece...
whose exploits in defeating various archaic monsters provided the founding myth
Founding myth
A national myth is an inspiring narrative or anecdote about a nation's past. Such myths often serve as an important national symbol and affirm a set of national values. A national myth may sometimes take the form of a national epic...
s of the Twelve Olympians
Twelve Olympians
The Twelve Olympians, also known as the Dodekatheon , in Greek mythology, were the principal deities of the Greek pantheon, residing atop Mount Olympus. Zeus, Hera, Poseidon, Demeter, Hestia, and Hades were siblings. Ares, Hermes, Hephaestus, Athena, Apollo, and Artemis were children of Zeus...
. Perseus was the Greek hero who killed the Gorgon
Gorgon
In Greek mythology, the Gorgon was a terrifying female creature. The name derives from the Greek word gorgós, which means "dreadful." While descriptions of Gorgons vary across Greek literature, the term commonly refers to any of three sisters who had hair of living, venomous snakes, and a...
Medusa
Medusa
In Greek mythology Medusa , " guardian, protectress") was a Gorgon, a chthonic monster, and a daughter of Phorcys and Ceto. The author Hyginus, interposes a generation and gives Medusa another chthonic pair as parents. Gazing directly upon her would turn onlookers to stone...
, and claimed Andromeda
Andromeda (mythology)
Andromeda is a princess from Greek mythology who, as divine punishment for her mother's bragging, the Boast of Cassiopeia, was chained to a rock as a sacrifice to a sea monster. She was saved from death by Perseus, her future husband. Her name is the Latinized form of the Greek Ἀνδρομέδη...
, having rescued her from a sea monster sent by Poseidon
Poseidon
Poseidon was the god of the sea, and, as "Earth-Shaker," of the earthquakes in Greek mythology. The name of the sea-god Nethuns in Etruscan was adopted in Latin for Neptune in Roman mythology: both were sea gods analogous to Poseidon...
in retribution for Queen Cassiopeia
Cassiopeia (mythology)
Cassiopeia is the name of several figures in Greek mythology.-Wife of Cepheus:The Queen Cassiopeia, wife of king Cepheus of Æthiopia, was beautiful but also arrogant and vain; these latter two characteristics led to her downfall....
declaring herself more beautiful than the sea nymphs.
Because of the obscurity of the name Perseus and the legendary character of its bearer, most etymologists pass it by, on the presumption that it might be pre-Greek; however, the name of Perseus’s native city was Greek and so were the names of his wife and relatives.

What is perseus's roman name?

In perseus.story what are the characters beliefs and morals?

How did perseus' actions make his world a better place?
More
x